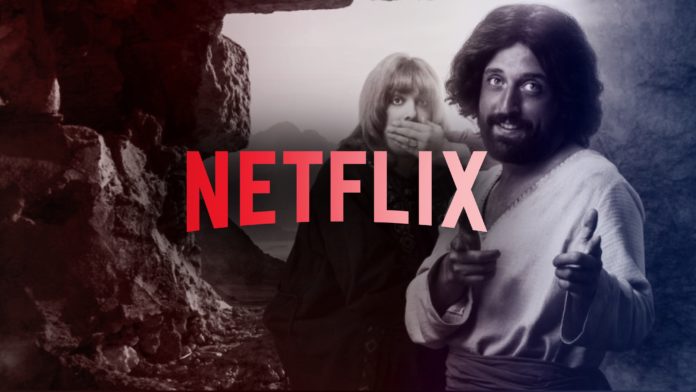 A Christmas comedy special which implies Jesus was gay is no laughing matter for more than a million angry viewers, who have signed a petition demanding it is pulled from Netflix on the grounds that it is offensive to Christians.

As the New York Daily News reports, The First Temptation of Christ from Brazil-based YouTube comedy group Porta dos Fundos is causing a stir with its irreverent take on the holiday. In addition to a weed-smoking Mary, the 46-minute special sees Jesus — accompanied by a flamboyant male friend — coming home to a surprise birthday party in his honor. Jesus appears to try to conceal his friend, who later joins the party and belts out an eyebrow-raising holiday ditty that includes the lyrics “In the heat of the desert I saw the size of his huge … power.”

Those upset over the depiction are calling for Netflix to stop streaming the special, with more than 1.1 million people signing a petition. Comments left by critics have accused Porta dos Fundos (which translates to Back Door) of showing religious discrimination and “derision and disrespect for the faith of the Catholic Church and especially for God.”

“No one is obliged to believe in Jesus Christ, but we demand respect for our beliefs,” wrote a commenter who claimed to have canceled his Netflix subscription in protest. “Whoever disrespects my God does not deserve my money.”

Netflix Christmas special which implies Jesus was gay sparks backlash from ChristiansWhile Netflix did not have a comment on the matter, Porto dos Fundos is taking the charges of “blasphemy” in stride, even tweeting out a link to a second petition calling the special “tragic and sad.”