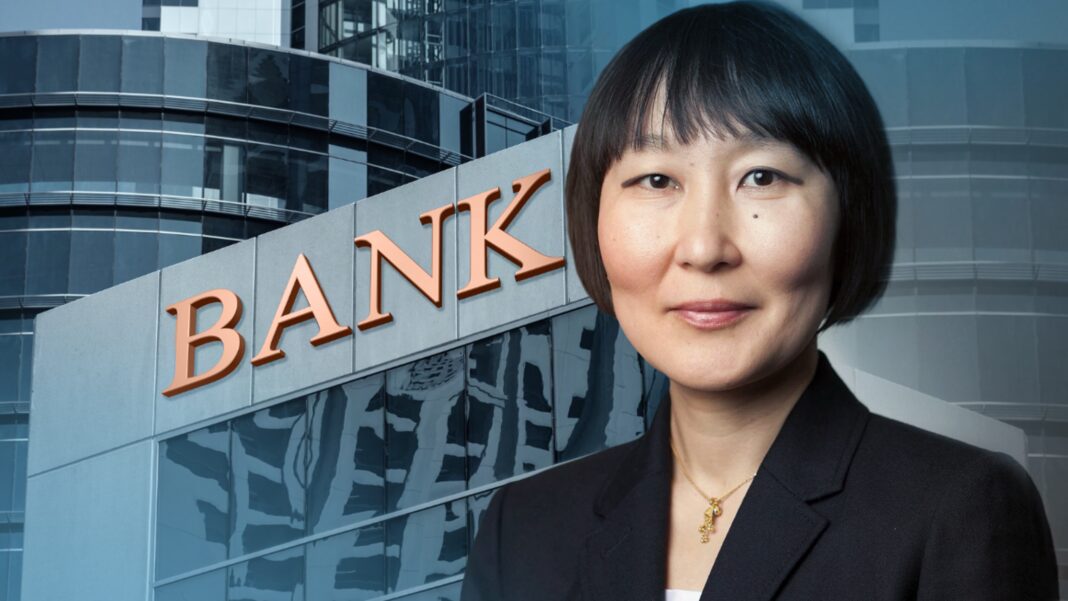 Saule Omarova, President Joe Biden’s nominee for the Office of the Comptroller of the Currency (OCC), called during a March 2021 virtual conference to eliminate all private bank accounts and deposits.

Omarova discussed one of her papers, “The People’s Ledger How to Democratize Money and Finance the Economy,” which would help “redesign” the financial system and make the economy “more equitable for everyone.”

She said it would change the “private-public power balance” and democratize finance to a more systemic level.

During her explanation of her paper, she said that the Federal Reserve, the nation’s central bank, can only use “indirect levers” to “induce private banks to increase their lending.”

Her paper calls for eliminating all banks and transferring all bank deposits to “FedAccounts” at the Federal Reserve.

During her conference speech, she said, “There will be no more private bank accounts, and all of the deposit accounts will be held directly at the Fed”:

Omarova said her proposal would give the Fed more “proactive” monetary policy tools, such as “helicopter money.” She also pondered how the Federal Reserve could “take money” from Americans during an inflationary environment.

A former senior government official told Breitbart News that if the Senate were to confirm Omarova, she would have the “most powerful, least accountable” position over America’s banking system.

When talking about FedAccounts, the former senior government official said, “The Democratic Party over the last couple of administrations, they want the government to essentially take over a lot of financial functions from banks.”

The LPE serves as a platform to discuss:

the role of law and legal discourse in the creation and maintenance of capitalism and in mediating tensions between capitalist order and democratic self-rule. Scholars in our network work to understand the relationship between market supremacy and  racial, gender, and economic injustice; to articulate the relationship between capitalism and devaluation of social and ecological reproduction; and to explore the distinctive ways that law gives shape to and legitimates neoliberal capitalism, ranging from dynamics of financialization to the relation between the carceral state and capitalism. We also seek to offer concrete legal reforms designed to move beyond neoliberalism and toward a genuinely responsive, egalitarian democracy, with critical attention to the need for power and movement-building as part of any such transformation. [Emphasis added]

HD Editor’s Note: Why Is this news Biblically Relevant?

Although Biden’s nominee, Saule Omarova, who was born in the Societ Union, denies communist sympathies, her background seems to tell a different story.

At the age of 17, she was a proud member and leader of the Young Communists at her school. She went on to study “Scientific Communism” as her first degree at the University of Moscow, a subject “dedicated to perfecting the revolution of Marxist-Leninism,” according to Daily Mail.

There has been much controversy surrounding her university dissertation, entitled, “Karl Marx’s Economic Analysis and the Theory of Revolution in The Capital.” Republicans in October asked Omarova to hand over her thesis to the Senate Banking Committee. The University of Moscow stated that any copy that might be in their position would have been destroyed.

In a statement published November 3rd, the US Senate Committee on Banking, Housing, And Urban Affairs, wrote:

The U.S. Senate Banking Committee formally received President Biden’s nomination of Professor Saule Omarova for Comptroller of the Currency. Notably missing from her paperwork, however, is a copy of her thesis, “Karl Marx’s Economic Analysis and the Theory of Revolution in The Capital.”

“All nominees within the Committee’s jurisdiction are required to provide their writings, articles, and papers. Unfortunately, Professor Omarova appears to believe she is exempt from these rules,” said Ranking Member Toomey. “In order for lawmakers to fully and fairly consider Professor Omarova’s nomination to serve as our nation’s top banking regulator, we need a complete picture of her policy positions. The fact that she recently deleted references to her thesis begs the question: what is she hiding?” [Emphasis original]

Many have warned against the rise of Communism and communist ideas in America, especially as young people in the United States have increasingly been looking favorably at Marxism/Socialism.

Back in June, a young lady who defected from North Korea made headlines when she publically spoke up about Communism being propagated by Ivy League schools, which she said was shocking.

Dennis Prager stated in an article published earlier this year, that a major problem has arisen from society’s newfound “denial” of the evils of communism.

“The most glaring example of the denial of evil is communism, an ideology that, within a period of only 60 years, created modern totalitarianism and deprived of human rights, tortured, starved and killed more people than any other ideology in history.”

Evangelist Franklin Graham has also warned against this disturbing pro-communism trend in America, urging that “we’d better wake up before it’s too late.”

“America is under attack from within,” he wrote. “Godless socialism and communism are threatening our very way of life in this country and the inroads already made are shocking. Even though no one has fired a shot, the battle is raging and we’d better wake up before it’s too late. It’s like some people have blinders on and don’t see the dangers of what is coming down the road.”

The specific views espoused by Biden’s nominee, are not only dangerous, but they have a relevance to Biblical prophecy that should not be ignored.

The Bible speaks of a future global government in Revelation 13. This world order, which will be totalitarian in nature, will have complete control over the populations’ money. The leader of the global government, the “antichrist” or “lawless one,” will demand that the world worship him by receiving his mark, and those that refuse to comply will not be permitted to “buy or sell” (Revelation 13:16-18).

For the parameters of Revelation 13 to be fulfilled as the Bible states, the world will have to move toward a global government, move toward a cashless society, and have massive levels of control over the personal finances of the people.

Jan Markell in her recent article, “Top Bible Prophecy Stories in 2021 – Harbingers Of His Return,” explained that the world is already preparing for a communist-style world government, and the WEF is at the forefront of this movement.

“Revelation 13 outlines the coming one-world government which will be led by the Antichrist,” she wrote. “In a brazen manner, the World Economic Forum boasts in their slogan that mankind will own nothing and be happy. They are telling us in advance that they plan to be in control, will own our possessions, and will govern with either Socialism or Marxism. I believe they manifest prominently in the Tribulation from which the church is gone. Yet, we see them coming to prominence and recognition already.”

“While these will be off-the-chart in the Tribulation, we see a foretaste of them now in the Church Age,” Markell added.