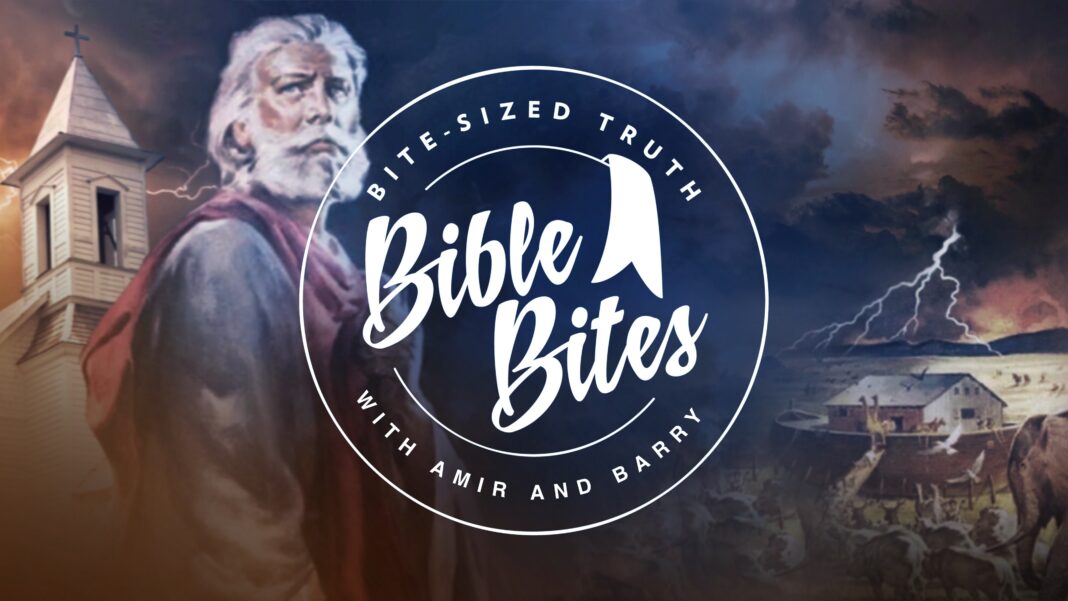 “Jesus said, “I will come again and receive you to Myself.” (John 14:3) The word “receive” is very interesting in Hebrew and in Greek. It means “to take to yourself.” There is a closeness – an intimacy, almost – inherent in the word.

There are people all around who are saying, “Look, the world is the same as it’s always been. From the time of our fathers until now, nothing has changed.” These people are really acting like those in the days of Noah, if you think about it. In the days of Noah, there were very few people who prepared themselves for something major and unexpected to happen. What did the rest of them do? Jesus told His disciples, “But as the days of Noah were, so also will be the coming of the Son of Man be. For as in the days before the flood, they were eating and drinking, marrying and giving in marriage, until the day that Noah entered the ark, and did not know until the flood came and took them all away, so also will the coming of the Son of Man be.” (Matthew 24:37-39) This is an amazing picture that parallels the way we will be taken out of here.

The people didn’t want to hear what Noah had to say. They didn’t want to listen to the warnings that God was giving through Noah. Those scoffers, like scoffers today, were saying that everything is just fine – like it’s always been. Why do you think they were saying that? To put people to sleep and steal their hope. The hope of the coming of Jesus is the most important thing that a believer can hold on to today, and it’s the number one blessing that Satan wants to steal from you. Whether it’s people who are close to you or those you listen to from a distance, the enemy will always bring those scoffers to mock you, saying, “Where is the promise of His coming?”

Among the many indicators we could examine that remind us that our redemption is near, two of the most significant come from when Jesus was asked about the signs of His coming. We find this account in Matthew’s record of the Olivet Discourse:

These two statements give us a significant amount of information about the spiritual climate of the world at the time of the coming of the Son of Man. One point of clarity that Jesus gives before we address those statements.

Matthew 24:38-39 KJV – “For as in the days that were before the flood they were eating and drinking, marrying and giving in marriage, until the day that Noe entered into the ark, And knew not until the flood came, and took them all away; so shall also the coming of the Son of man be.”

The coming of the Son of Man in the Olivet Discourse can only mean the Rapture of the church. We know this because of the statement of Jesus regarding the days “before the flood”. He said there was an indifference to the signs of impending judgment – signs like Noah building an ark and preaching. This indifference was demonstrated by the business-as-usual attitude indicated by the eating, drinking, and marrying and giving in marriage until the flood came and took them all away. Jesus, in essence, said these wicked people did not know that the wrath of God was about to be poured out on the whole world until it was too late.

This ignorance and indifference can only be true of the pre-Tribulation period. During the Tribulation, it will eventually become clear to all that something really bad is taking place.

Revelation 6:15-17 KJV – “And the kings of the earth, and the great men, and the rich men, and the chief captains, and the mighty men, and every bondman, and every free man, hid themselves in the dens and in the rocks of the mountains; And said to the mountains and rocks, Fall on us, and hide us from the face of him that sitteth on the throne, and from the wrath of the Lamb: For the great day of his wrath is come; and who shall be able to stand?”

The coming of the Son of Man that Jesus talks about cannot refer to the Second Coming, because at the time of the Second Coming the wrath of God is coming to an end. For the other interpretation to work, the Second Coming would have to be initiating the period of God’s wrath. That is clearly contrary to Scripture. During the Great Tribulation the kings of the earth, the great men, the rich men, the commanders, the mighty men, every slave and every free man, are fully aware they are experiencing the wrath of God, saying, “the great day of His wrath has come.” That means the Noah-like days for which we are told to be ready are before the Rapture, not the Second Coming.

Back to the two indicators that we should be looking out for that will demonstrate that the coming of the Son of Man for His church is near. Let’s look back at the time of Noah.

Genesis 6:5 KJV – “And God saw that the wickedness of man was great in the earth, and that every imagination of the thoughts of his heart was only evil continually.”

Genesis 6:11-12 KJV – “The earth also was corrupt before God, and the earth was filled with violence. And God looked upon the earth, and, behold, it was corrupt; for all flesh had corrupted his way upon the earth.”

Lawlessness – In 2 Thessalonians 2, Paul drew a parallel between lawlessness and the season of history when the rapture will occur. Lawlessness can be defined as being without moral constraint. What does that look like? Look at what we just read about the days of Noah – evil, violent, corrupt.

Apathy – Jesus also said in Matthew 24:44 that the Son of Man will come at an unexpected hour. The word translated “hour” can mean a season of time or a period of history, which fits perfectly with the context of the Olivet Discourse. People will be doing their own thing, not expecting or caring that judgment is right around the corner.

This tells us that when the time is near for the Son of Man to come for His church, the majority of mankind, like in the days of Noah, will cast off all moral restraint. This will lead to a corrupt and violent world where the heart of mankind is revealed in its continually evil intentions. It will be a season of history when relatively few will be expecting the coming of the Son of Man, and which will be followed by the wrath of God pouring out upon the whole earth – just like in the days of Noah.

There are a myriad of signs we could add to the checklist, but these two alone – lawlessness and apathy – are enough to indicate to us that our redemption is near. We do not know the day or hour, but we do know we are living in days like those of Noah. Thus, we also know that the wrath of God will come on a world that is expecting to get away with their moral unrestraint. Finally, we know the words of Peter, when he writes:

2 Peter 3:1-6 KJV – “This second epistle, beloved, I now write unto you; in both which I stir up your pure minds by way of remembrance: That ye may be mindful of the words which were spoken before by the holy prophets, and of the commandment of us the apostles of the Lord and Saviour: Knowing this first, that there shall come in the last days scoffers, walking after their own lusts, And saying, Where is the promise of his coming? for since the fathers fell asleep, all things continue as they were from the beginning of the creation. For this they willingly are ignorant of, that by the word of God the heavens were of old, and the earth standing out of the water and in the water: Whereby the world that then was, being overflowed with water, perished:”

The earth is filled with violence, the thoughts and intentions of man’s heart is only evil continually, expectancy of the Lord coming for His church is low, and many even scoff at the idea of His return. All this tells us, Jesus is coming soon!

URGENT NEED:  Harbingers Daily is in the Middle of Relocating our Ministry Across the Country. We are asking our Readers to Consider Helping us  Fundraise $25,000   to complete this Move.

If you like our Content and Support our efforts to Counter Deception with Biblical Truth, Please Prayerfully Consider Donating (Every little bit helps!)