Bible Bite: The Hope of Every Believer 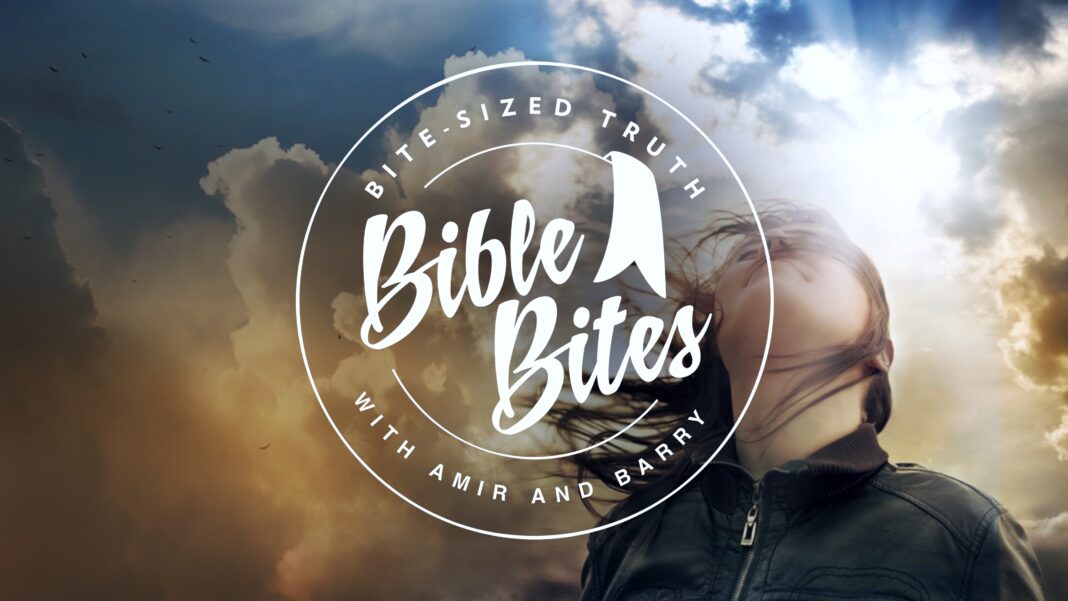 “For the sake of those of you who are struggling with the concept of, what is the rapture all about? Let me remind you that in the letter that Paul wrote to the church in Thessaloniki, a church in Northern Greece, probably the only one that I can think of that had no Jews in it. And therefore no Old Testament verses were ever quoted in those epistles. And it’s interesting because he said to them, “I do not want you to be ignorant brethren concerning those who have fallen asleep.” This is the biblical term for those who died as believers. You see, we as believers, we don’t die and enjoy that death that is so final and it’s so destructive.

No, we just fall asleep. And when your child falls asleep, all you do is you take him and you move him to bed. So, he falls asleep here and he wakes up here. “Lest you sorrow as others who have no hope.” He says, “Listen, any believer, even if he dies, he’s not dead.” He’s no longer … it’s not like he’s no longer going to live. And this is our hope. So why do you cry and mourn and lament as if you have no hope? “If we believe that Jesus died and rose again, even so God will bring with Him those who sleep in Jesus.” In other words, once Jesus rose from the dead, that’s when death was basically defeated.”

While many rapture-deniers and doubters use Scripture to defend their position, there is one scriptural problem with denying the rapture that stands above them all:

Daniel 12:2 KJV – “And many of them that sleep in the dust of the earth shall awake, some to everlasting life, and some to shame and everlasting contempt.”

John 11:21-25 KJV – “Then said Martha unto Jesus, Lord, if thou hadst been here, my brother had not died. But I know, that even now, whatsoever thou wilt ask of God, God will give it thee. Jesus saith unto her, Thy brother shall rise again. Martha saith unto him, I know that he shall rise again in the resurrection at the last day. Jesus said unto her, I am the resurrection, and the life: he that believeth in me, though he were dead, yet shall he live”

The Bible does not teach “soul sleep,” but rather as Paul wrote:

2 Corinthians 5:8 KJV – “We are confident, I say, and willing rather to be absent from the body, and to be present with the Lord.”

When a Christian dies, their soul goes directly into the presence of the Lord while their body remains on, or in, the earth. The soul and body someday reuniting at the resurrection of the dead is taught in both Testaments. This creates a significant problem for the rapture-denier. Here’s why:

1 Thessalonians 4:13-18 KJV – “But I would not have you to be ignorant, brethren, concerning them which are asleep, that ye sorrow not, even as others which have no hope. For if we believe that Jesus died and rose again, even so them also which sleep in Jesus will God bring with him. For this we say unto you by the word of the Lord, that we which are alive and remain unto the coming of the Lord shall not prevent them which are asleep. For the Lord himself shall descend from heaven with a shout, with the voice of the archangel, and with the trump of God: and the dead in Christ shall rise first: Then we which are alive and remain shall be caught up together with them in the clouds, to meet the Lord in the air: and so shall we ever be with the Lord. Wherefore comfort one another with these words.”

The rapture-denier has to answer this question: If the resurrection of the believing dead reunites the soul with a resurrected and glorified body to always be with the Lord, then how are those who are alive and remain going to get to heaven when the Church Age ends? Are they all going to die so they can be resurrected? There is no scriptural evidence to support that proposition. Will they go into the Tribulation and die then and be taken to heaven? That’s a problem as well since the Church is unmentioned during the Tribulation, which follows the Church Age.

The only plausible answer is, Christians who are alive when the bodies of the believing dead are resurrected are going to be “caught up” with the dead in Christ to meet the Lord in the air.

Philippians 3:20-21 KJV – “For our conversation is in heaven; from whence also we look for the Saviour, the Lord Jesus Christ: Who shall change our vile body, that it may be fashioned like unto his glorious body, according to the working whereby he is able even to subdue all things unto himself.”

Don’t you have to be “alive” to eagerly await something? These lowly bodies will be instantly transformed into glorious bodies like that of the resurrected Jesus in a moment and twinkling of an eye.

The rapture is not a new concept nor is it only a New Testament concept.

2 Kings 2:11 KJV – “And it came to pass, as they still went on, and talked, that, behold, there appeared a chariot of fire, and horses of fire, and parted them both asunder; and Elijah went up by a whirlwind into heaven.”

Why did God “take” Enoch?

Hebrews 11:5-6 KJV – “By faith Enoch was translated that he should not see death; and was not found, because God had translated him: for before his translation he had this testimony, that he pleased God. But without faith it is impossible to please him: for he that cometh to God must believe that he is, and that he is a rewarder of them that diligently seek him.”

What God can do with one, He can do with millions at a time, and He will. He will do so at the same time He resurrects the dead in Christ. And since God has not appointed the Church to wrath (1 Thessalonians 5:9), those who are alive and remain have to be taken to meet the Lord in the air, too.

1 Thessalonians 4:17 KJV – “Then we which are alive and remain shall be caught up together with them in the clouds, to meet the Lord in the air: and so shall we ever be with the Lord.”

It is a comfort to know that there is an entire generation of Christians who will bypass death and be translated into the presence of the Lord with the dead in Christ. Prophecy indicates that we are living in that generation!