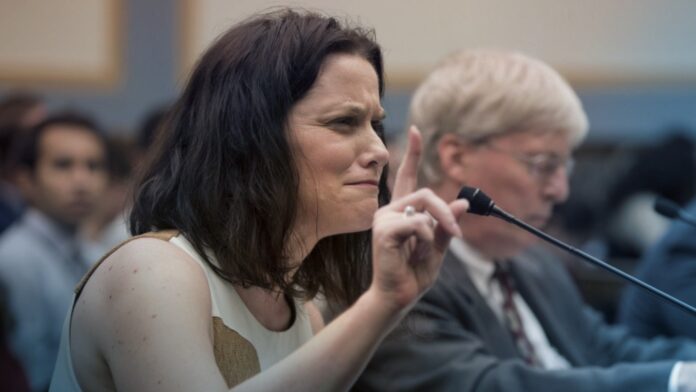 “Thank you, sir,” she said. “You are by far the most pro-life, demonstrably pro-life president we have ever had. In recent times, the most courageous.”

Jessen, who has cerebral palsy, went on to say: “As someone born in an abortion clinic who did not die, I want to thank you. You are mocked all the time. And I will tell you, I will stand up for you.”

Jessen, born miraculously in the 1970s after her biological mother underwent a failed saline abortion procedure, has been an outspoken advocate for the pro-life movement.

In 2015, she appeared before the U.S. House Judiciary Committee, where she asked: “If abortion is about women’s rights, then what were mine?”

Directing her queries to Planned Parenthood, the nation’s largest abortion business, Jessen went on to say:

You continuously use the argument, “If the baby is disabled, we need to terminate the pregnancy,” as if you can determine the quality of someone’s life. Is my life less valuable due to my cerebral palsy?

You have failed, in your arrogance and greed, to see one thing: it is often from the weakest among us that we learn wisdom — something sorely lacking in our nation today. And it is both our folly and our shame that blinds us to the beauty of adversity.

Planned Parenthood uses deception, the manipulation of language, and slogans, such as “a woman’s right to choose,” to achieve their monetary aims.

Trump announced Wednesday that he would be signing a “born alive” executive order.

“Today, I am announcing that I will be signing the born alive executive order to assure that all precious babies born alive, no matter their circumstances, receive the medical care that they deserve,” said the president. “This is our sacrosanct moral duty.”

His action came after Sen. Ben Sasse’s (R-Neb.) “Born-Alive Abortion Survivors Protection Act” has failed to pass Congress. Several states, however, have passed their own versions of the bill.

Voicing his support for a state bill that would have codified access to abortion up to the moment of birth, Northam explained what could be permissible should an infant survive a botched termination.

The governor’s comments were roundly condemned at the time as “ghoulish,” “sick,” and “horrifying.”

Gianna Jessen is an outspoken Christian, who credits her survival of her mother’s abortion fully to the Lord.

“Saved by the power of Jesus Christ,” she says. “I am unashamedly a Christian, will not change that part of my story.”

In a powerful and eyeopening speech made in 2008, Jessen spoke out about her survival giving all the Glory to the Lord. She also explained some of the things that are the most troubling to her about the anti-life, pro-abortion movement:

“I know in the age that we live in it is not at all politically correct to say the name of Jesus Christ in places like this; to bring him into these sorts of meetings because his name can make people so terribly uncomfortable,” she said at the beginning of her speech. “But I didn’t survive so I could make everyone comfortable.”

“Now I am just compelled to say this,” she continued. “If abortion is merely about women’s rights, ladies and gentlemen, then what were mine? There was not a radical feminist standing up and yelling about how my rights were being violated that day. In fact, my life was being snuffed out in the name of women’s rights.”

“Ladies and gentlemen, there are things that you will only be able to learn by the weakest among us. And when you snuff them out, you are the one that loses. The Lord looks after them but you are the one that will suffer forever,” Jessen warned. “And what arrogance, what absolute arrogance. And it has been an argument for so long in this human place that we live, that the stronger should dominate the weaker, should determine who lives or dies. The arrogance of that! Don’t you realize that you cannot make your own heartbeat? Don’t you realize that all the power you think you possess, you really possess none of it, it is the mercy of God that sustains you? Even when you hate Him.”

“I tell you these things because listen, ladies and gentlemen, we are in an interesting battle, whether we realize it or not, in this world. It is a battle between life and death. What side are you on?” she asked the audience.

“Some of you might be slightly annoyed that all I do is keep talking about God and Jesus, but how on earth can I walk about, limping through this world and not give all my heart, my mind, my soul and strength to the Christ who gave me life?” Jessen exclaimed. “So, if you think I am a fool… It’s just another jewel in my crown.”