What Do the Events in Afghanistan Reveal About Our World? 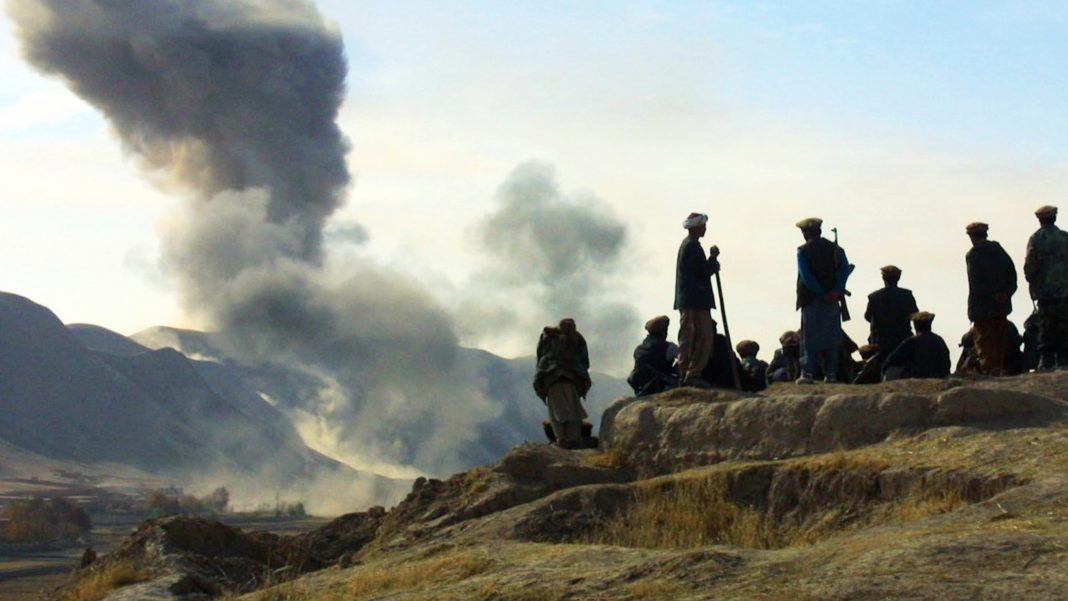 The Biden administration’s gift of Afghanistan to the Taliban reveals many things about our world as we journey through these biblical times leading up to the time of Jesus’ appearing.

I believe that those in control of America’s government want us to conclude that the tragic events in Afghanistan happened as the result of Biden’s incompetence and the failure of the Afghan army. I do not profess to know all that’s going on behind the scenes, but I’m convinced those truly in power of the U.S. planned the Taliban takeover of the nation with the full knowledge that all we see today would take place.

“Afghanistan—Not by Accident: The disaster that is Afghanistan is so defective in so many profound and different ways that it has to be a purposeful decision to try and destroy America’s standing in the world. Nobody could make so many mistakes at that level and have it all be by accident. We know the leftist Biden Administration has already done everything they can to sabotage America. And by creating such a gigantic avoidable disaster we are communicating to the world that we can’t be trusted.”

The U.S. military did not merely withdraw from Afghanistan; it rapidly exited from the nation in the middle of night without any advance notification to the Afghans or to any of our allies. In doing so, they left behind a wide array of armaments and sophisticated weaponry worth, according to some reports, as much as $85 billion. It’s now available for use by one of the world’s most ruthless and murderous terrorist organization.

In spite of all this, I remain absolutely convinced of God’s sovereignty over history and that the events of the past couple weeks are all in step with the rapidly approaching seven-year Tribulation. I say this for the following reasons:

EVIL CONTINUES TO GROW EXPONENTIALLY IN OUR WORLD

The recent events in Afghanistan confirm the rapidly growing presence of evil in our world. The Taliban are ruthless, demonic killers that seek to impose an oppressive tyranny on the Afghan citizens of which they are well aware. Why else would mothers hand their babies to soldiers at the Kabul Airport? They would rather see that their infants have a chance at freedom than raise their dear precious children under a viciously cruel regime that kills without any hint of remorse.

The Taliban are torturing and murdering Afghans who cooperated in any way with the Americans during the past twenty years. They also require that all households with a young woman twelve years of age or older mark their homes with an “X.” If the soldiers find a home not marked in such a way with such a daughter, they execute the entire family.

According to one report, “Husbands and fathers have given their wives and daughters guns and told them that when the Taliban come, they can choose to kill them or kill themselves—it is their choice.”

The Taliban represent demonic evil at its worst and it greatly saddens me so see my country standing back and allowing these atrocities to continue. The U.S. army had the ability to stop the rapid takeover of Afghanistan and now possesses the power to stop these current murderous activities, but still does nothing.

Regardless of his mental state, President Joe Biden bears much of the responsibility for the suffering and bloodshed in Afghanistan. He cannot hide behind his dementia or the decisions of a previous administration. As Commander and Chief, Biden had control of the American military at the time of the exit; he executed his plan for its rapid departure. He was not bound by any other previous plans. He put his plan into operation and what we see happening in Kabul is the result of it.

AMERICA IS NO LONGER FORCE FOR GOOD IN THE WORLD

The recent events in Afghanistan reveal that the United States is no longer a force for good in the world. During WW II, the U.S. played a crucial role in stopping the Axis powers. We stopped the Nazi’s from taking over Europe and ended the slaughtering of the Jewish people in Hitler’s concentration camps.

Now, however, we have not only allowed a force equally evil, if not more so than the Nazi’s to take over a nation, but we have supplied them with weapons beyond their wildest dreams. If the U.S. does not stop the Taliban now, the death toll of innocent lives that these barbaric terrorists may very well be astronomical apart from the Lord’s intervention. Keep praying!

At the moment, Biden seems to be cowardly bowing to wishes of the Taliban while overlooking their ongoing atrocities. He seems content to leave thousands of Americans behind to suffer at the hands of these vicious, ruthless, and murderous terrorists. Why would he do that?

The inept response of the U.S. in Afghanistan has emboldened China to advance its plans for attacking and taking control of Taiwan. The leaders of Israel talk openly about the fact that they can no longer depend upon the United States if attacked. Could this be an open door for the future invasion of Israel?

AFGHANISTAN COULD HAVE A ROLE IN THE GOG/MAGOG WAR

An August 25, 2021, article on the Lion and Lamb Ministries website suggests that Afghanistan will take part in the invasion of Israel described in Ezekiel 38-39. Nathan Jones, in the quote below, explains why we might consider this nation as part of “Magog:”

Some historians point to the former Soviet nations of Kazakhstan, Kyrgyzstan, Uzbekistan, Turkmenistan, Tajikistan, as well as including Afghanistan, as encompassing the land of Magog. Historian Edwin Yamauchi explains that Magog was the “ancient Scythian northern nomadic tribes who inhabited the territory from Central Asia across the southern steppes of modern Russia.” These nations, today consisting of a population of 60 million, are united by one commonality — Islam.[i]

If so, this tells us that the Taliban’s reign of terror will be short-lived. The Lord will destroy them along with all the other nations that come against Israel. It would make God’s intervention all the more spectacular given the weapons these terrorists now possess.

Most teachers of biblical prophecy believe the Gog/Magog war will occur between the Rapture and the start of Tribulation. If the seizing of Afghanistan by the Taliban signifies another step in the leadup to this war, then it’s also another indication of the nearness of the Tribulation.

THE WORLD ORDER IS FORMING BEFORE OUR EYES

The U.S. appearance of weakness removes a key obstacle in the plans of the globalists for world domination. The America of a year ago retained its place as a force for good in the world and hence a hinderance to the plans of the elite at the UN and the World Economic Forum (WEF), but such is no longer the case.

President Biden took his campaign slogan directly from the WEF and remains totally committed to their communist agenda, which necessitates a weakened America that’s unable to resist the plans of the globalists to setup a Marxist world government such as will be in place during the Tribulation period.

Although the Taliban leadership do not yet realize this, they are pawns in the globalists’ agenda to create a new world order (the Great Reset of the WEF and the UN’s Agenda 2030). I do not know the purposes of these powerbrokers for allowing the rise to power of these ruthless terrorists.

I am certain, however, that a demonic agenda lies behind what we see happening in this faraway land, which the elite hope to exploit in their quest for worldwide domination.

Perhaps the place where it hits the closest to home for us is this: the events in Afghanistan clearly reveal Satan’s murderous hatred for all those in Christ. I have read many reports to the effect that if the Taliban soldiers find anyone with the Bible on his or her smartphone, they instantly kill that person.

Credible reports exist to the effect that the Taliban are going door-to-door and executing all Christians that they find. One missionary, who has been in contact with twenty-two Afghan pastors, reports that most of them do not expect to survive this murderous purging. Though many attempt to label these reports as fake news, confirmation exists in firsthand accounts leaking out of Afghanistan.

In Ephesians 6:11-12, Paul wrote regarding the role of Satan behind all the opposition we face as New Testament saints,

Ephesians 6:11-12 KJV – “Put on the whole armour of God, that ye may be able to stand against the wiles of the devil. For we wrestle not against flesh and blood, but against principalities, against powers, against the rulers of the darkness of this world, against spiritual wickedness in high places.”

The reluctance of President Biden to condemn or stop the bloodshed of Christians by the Taliban does not bode well for the future of the true church in America. If the Lord does not come for us in the near future, we may feel the venomous rage of our adversary to a much greater degree.

Please know that as the shadow of the coming Tribulation period grows darker by the day, the Bible assures us that everything remains under God’s control and that we have many reasons for hope in the midst of the darkness that is quickly overshadowing the world.

We cannot know the day nor the hour, but make no mistake, we live in the season of Jesus’ appearing to take us home to the place He’s preparing for us. The “blessed hope” of the gospel (Titus 2:11-14) signifies our soon departure from this world to be with Jesus. He will come for us at just the right time. We live in biblical times.

Through the Apostle Paul, the Lord promises us deliverance from the time of wrath that is about to overtake the world. In 1 Thessalonians 5:9, we read this about the timing of the rapture that must happen before the Tribulation:

1 Thessalonians 5:9 KJV – “For God hath not appointed us to wrath, but to obtain salvation by our Lord Jesus Christ”