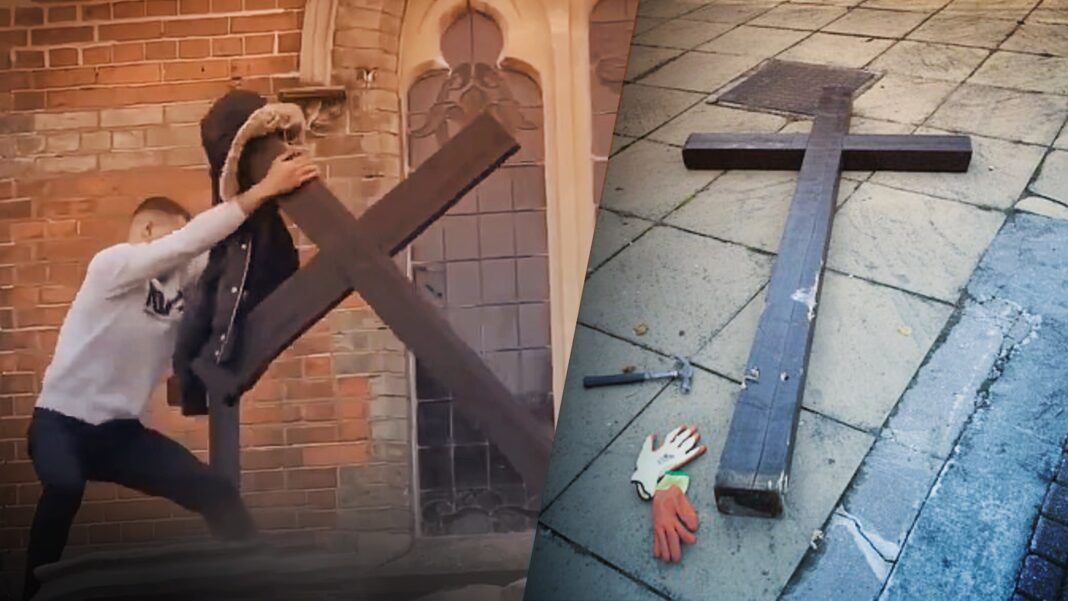 A video of a young man caught brazenly tearing down a large cross in front of a London church in broad daylight has gone viral, adding to the evidence that Christianity and Church property are increasingly under assault around the globe. The Oct. 18 video has already garnered over 3 million views on Twitter alone.

The video shows the man standing on the roof above the entrance of Chadwell Heath Baptist Church, struggling to dislodge the large cross as cars speed past on the busy urban street.

After the video was posted on Twitter, the local police department was quick to explain:  “We are aware of a video circulating on social media of a male causing damage to a religious premises on high Road, Chadwell Heath.  A male has been arrested and the matter is being investigated.”

The 19-year-old man was charged with “religiously aggravated criminal damage.”

“We are a Christian country and our culture is under assault,” tweeted Nigel Farage, a former member of the European Parliament who led the UK Brexit movement.

The video shows a young male methodically yanking down the cross on top of the Chadwell Heath Baptist Church, which describes itself as “an informal multinational congregation of around 70 people [who] seek to worship God and pray together, to share the good news of Jesus Christ, to encourage people to be His disciples and serve the local community and wider church family.”

The man makes no attempt to even partially hide his identity — which would not be difficult, with the sight of people wearing masks even outdoors not uncommon in London amid the ongoing Wuhan virus pandemic — and appears heedless of the fact that there are multiple people at the scene or passing by at the time of the act.

The video has elicited a furious response on social media, with many users suggesting that the man’s actions would have been front-page news and the subject of public denouncements by leading politicians had his apparent target been a Muslim mosque rather than a Christian church.