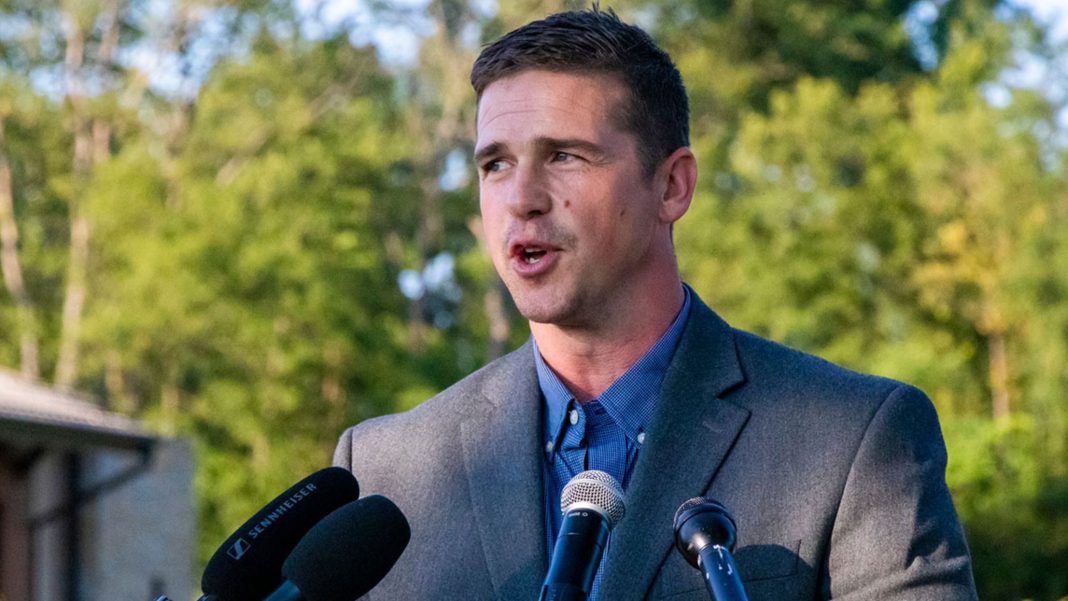 Cross first garnered media attention in May after he spoke out against the school district’s proposed policy requiring teachers and students to use transgender-affirming language.

“I am speaking out of love for those who suffer with gender dysphoria,” he said during the May 25 public forum. “I love all of my students, but I will never lie to them regardless of the consequences.

“I’m a teacher, but I serve God first and I will not affirm that a biological boy can be a girl and vice versa because it’s against my religion. It’s lying to a child. It’s abuse to a child. And it’s sinning against our God.”

On May 27, the school district, claiming Cross’ words had a “disruptive impact” on the school, placed him on paid administrative leave pending an investigation into his speech at the meeting. He was also banned from Loudoun County Public Schools properties and events. And later that day, an email was sent to “all Leesburg Elementary parents and staff” informing them of Cross’ suspension.

In response, Cross filed a lawsuit against the school board in state court, alleging “viewpoint-based retaliation.”

On June 8, the 20th Judicial Circuit Court of Virginia ruled in favor of Cross’ request for a temporary injunction against the school’s decision to place him on administrative leave, and suggested that Cross’ First Amendment rights were violated.

“Although the [school] board may have considered Cross’ speech to be ‘a trifling and annoying instance of individual distasteful abuse of a privilege,’ we believe Cross has a strong claim to the view that his public dissent implicates ‘fundamental societal values’ deeply embedded in our Constitutional Republic,” the Aug. 30 ruling stated.

The state’s high court summed up its decision, writing, “[The school board’s arguments] do not override Cross’ and other teachers’ interests in exercising their constitutionally protected right to speak on the proposed transgender policy.”

Unfortunately, the school board has already passed a version of the transgender policy that was discussed at the May 25 public forum.

This has prompted Alliance Defending Freedom lawyers to ask the trial court to allow them to amend Cross’ lawsuit in order to challenge the policy on behalf of Cross, as well as Loudoun County High School history teacher Monica Gill and Smart’s Mill Middle School English teacher Kim Wright.

“Teachers shouldn’t be forced to promote ideologies that are harmful to their students and that they believe are false, nor should they be silenced for commenting at a public meeting,” said ADF Senior Counsel Tyson Langhofer, director of the ADF Center for Academic Freedom. “The lower court’s decision was a well-reasoned application of the facts to clearly established law, as the Virginia Supreme Court found. But because Loudoun County Public Schools is now requiring all teachers and students to deny truths about what it means to be male and female and compelling them to call students by their chosen pronouns or face punishment, we have moved to amend our lawsuit to challenge that policy on behalf of multiple faculty members. Public employees cannot be forced to contradict their core beliefs just to keep a job.”

Franklin Graham, in response to Virginia’s Supreme Court ruling, wrote: “Remember Tanner Cross? He’s the elementary school gym teacher in Loudoun County, Virginia, who was suspended from his job for opposing the school district’s “gender policy.” Tanner told the school board that he would not “affirm that a biological boy can be a girl and vice versa.” Some great news this week as the Virginia Supreme Court ruled to reinstate Tanner in his job upholding a lower court’s ruling that his suspension was “likely unconstitutional” and “unnecessary and vindictive.” I’ll say it was! Tanner had told the school board, “I’m a teacher, but I serve God first.” Thank you Tanner for standing up against these godless agendas trying to infiltrate our schools! Join me in congratulating him in the comments below—and give thanks to God for this outcome!”