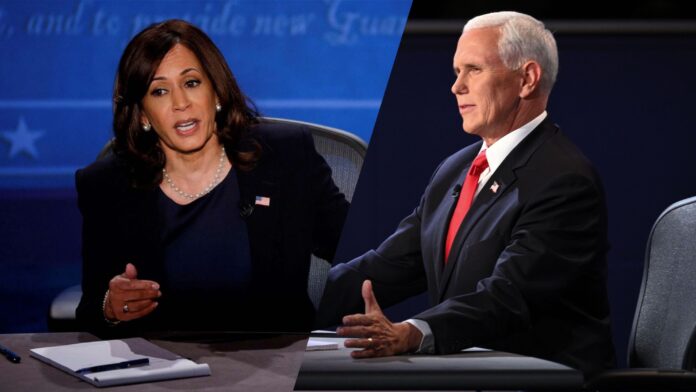 While both candidates ignored a number of specific questions posed to them, they each addressed their major talking points, and both noted the clear distinctions between the two tickets. “The stakes have never been higher, but I think the choice has never been clearer,” Pence said.

Page asked about the candidates’ abortion stands by noting that if Amy Coney Barrett is confirmed, the Supreme Court, with a solid conservative majority, could overturn Roe v. Wade, leaving abortion access in the hands of the states.

“Vice President Pence,” Page said, “you’re the former governor of Indiana. If Roe v. Wade is overturned, what would you want Indiana to do? Would you want your home state to ban all abortions?”

Surprising observers on both sides of the abortion issue, Pence spent roughly half of his allotted two minutes returning to a previous topic and noting that Joe Biden and Kamala Harris had opposed the U.S. strike that killed Iranian General Qasem Soleimani this past January.

He then spoke of Barrett’s qualifications and his hope that she would receive a fair hearing in the Senate. “We particularly hope,” Pence added, “that we don’t see the kind of attacks on her Christian faith that we saw before,” reminding viewers that during Barrett’s appellate court confirmation hearings in 2017, Sen. Dianne Feinstein had expressed concern that Barrett’s beliefs would affect her ability to serve effectively as a judge.

Pence’s allotted time expired without his addressing the abortion question.

Page then asked Harris how she would hope that California, her home state, would respond if Roe v. Wade were overturned.

“First of all,” Harris said, “Joe Biden and I are both people of faith, and it’s insulting to suggest that we would knock anyone for their faith.” She noted that Biden, if elected, would be only the second practicing Catholic to serve as president—neglecting to point out that Biden’s support of abortion is at odds with the position of the Roman Catholic Church.

She then argued that because the election is already underway with early voting, the open seat should not be filled until the election results are in.

She added, “I will always fight for a woman’s right to make a decision about her own body. It should be her decision, and not that of Donald Trump and the vice president, Michael Pence.”

Pence returned to the abortion question after being asked about the Affordable Care Act.

“I couldn’t be more proud to serve as vice president to a president who stands without apology for the sanctity of human life,” he said. “I’m pro-life, and I don’t apologize for it. And this is another of those cases where there is such a dramatic contrast. Joe Biden and Kamala Harris support taxpayer funding of abortion, all the way up to the moment of birth. Late-term abortion. They want to increase funding to Planned Parenthood of America. Now, for our part, I would never presume upon how Judge Amy Coney Barrett would rule in the Supreme Court of the United States, but we’ll continue to stand strong for the right to life.”

Pence then pushed Harris for a straight answer on whether or not a Biden-Harris administration would “pack” the Supreme Court with additional liberal justices to counteract a conservative majority. Harris dodged that question, prompting Pence to look at the television camera and state: “If you haven’t figured it out yet, the straight answer is, they are going to pack the Supreme Court if they somehow win this election. Men and women, I’ve got to tell you, people across this country, if you cherish our Supreme Court, if you cherish the separation of powers, you need to reject the Biden-Harris ticket.”

Franklin Graham – Many “political issues” are actually, and more importantly, biblical and moral issues. I am so grateful for Vice President Mike Pence’s bold and consistent stand in defense of the unborn. Last night he told America and the world, “I couldn’t be more proud to serve as Vice President to a President who stands without apology for the sanctity of human life. I’m pro-life, I don’t apologize for it. And this is another one of those cases where there’s such a dramatic contrast. Joe Biden and Kamala Harris support taxpayer funding of abortion all the way up until the moment of birth. Late-term abortion. They want to increase funding to Planned Parenthood of America.” Every life is important to God, the Creator of life.