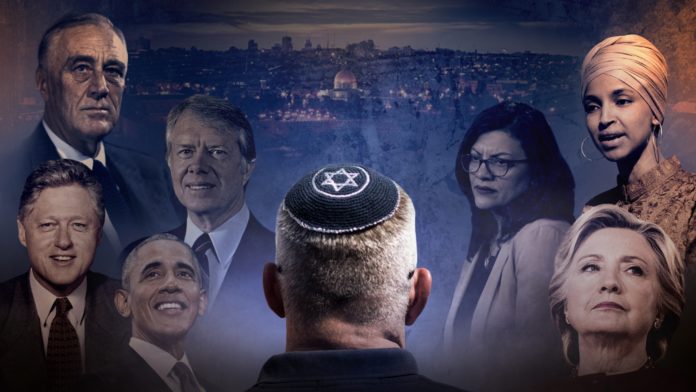 A few years ago I wrote an article about the loyalty the Jewish people show to the Democrat Party. I titled it “Under a Spell” because they truly are. I watched this spell among my own Jewish family members who all came from Minnesota’s Iron Range west of Duluth, MN.

At one time there was a substantial Jewish population in northern Minnesota as they escaped all the anti-Semitism in the bigger cities, particularly Minneapolis/St. Paul where Jews were persecuted and marginalized until more recent decades.

In the 1940s, the Jews overwhelmingly supported a President who was their enemy — Franklin Roosevelt. Over 90% of Jews voted for him in 1944. He looked the other way to the evils of the Holocaust. He could have saved hundreds of thousands if American troops just would have bombed the railroad tracks going to the camps.

Roosevelt had no interest in intervening.

God removed him from the presidency before 1948, as he would not have voted for the independent State of Israel.

Many Jews voted for two anti-Semites — Jimmy Carter and Barack Obama. No two U.S. Presidents did more damage to Israel than these men — yet they got the Jewish vote by and large, though the Jews grudgingly voted for Carter!

Today, we have two Muslim Congresswomen, Ilhan Omar from Minnesota and Rashida Tlaib from Michigan.  Ilhan Omar is a shady character at best and would delight in the destruction of Israel, but many Minnesota Jews voted for her! I know because I live here! It makes no sense. Isn’t it time to move on to someone who does??

Many Jews in Congress were outraged that Representatives Omar and Tlaib were banned from Israel recently. Some, such as Sen. Chuck Schumer, Jerold Nadler, Elliot Engel, and others, were vocal about this. Liberal values came before the cause of Israel and her safety and prosperity.

I was present a few years ago at a local AIPAC meeting that featured another Muslim, Keith Ellison. What is a Muslim doing at ANY Jewish gathering?? He was celebrated that night with cheers.  Ellison wants Sharia Law in Minnesota and other states! Yet Minnesota Jews were among those who voted Ellison in as Minnesota’s Attorney General.

Over 70% of American Jews voted for Hilary Clinton rather than Israel’s greatest Presidential friend, Donald Trump. They overwhelmingly voted for Bill Clinton in the 1990s.

So How Do We Make Sense of This?

It Is Not Just the Jews Who Are Blind

The blindness of the Jews has already been referenced here, but it is not just Jews who are blind today. Much of the world cannot see truth.Even church members are blind to the signs of the times breaking all around us! Most Christians are focused on earthly interests, lacking the eternal view.

Those who see the truth and love the truth are few in number, be they Jew or Gentile! I call the real truth seekers today “remnant believers.”

And, I continue to pray that their numbers increase!

Prophecy Roundtable – The Rise of False Teachings in the Last...