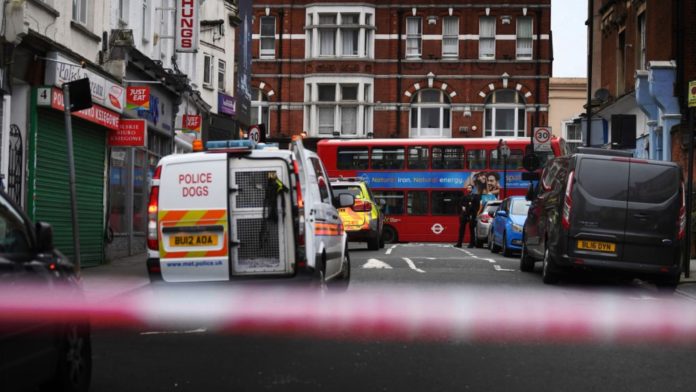 Armed police have shot dead a suspected terrorist feared to be wearing a suicide vest after he grabbed a knife from a shop and stabbed a man and a woman during a brutal high-street rampage in south London.

The incident comes just three months after the London Bridge attack where Usman Khan was shot dead by armed police after he killed two people and injured three others while wearing a fake suicide vest.

Officers raced to the scene outside a supermarket on High Road in Streatham at around 2pm today following reports of gunfire.

Photos from the scene show a lifeless body face down on the pavement with what have been described as ‘silver canisters’ strapped to his chest with a large knife is lying beside him.

In one video, police toting machine guns and masked undercover officers are seen approaching the suspect’s body before rapidly moving away from the area.

Scotland Yard said the broad-daylight carnage was a terror-related incident around an hour after first reports from the scene. The area remains on emergency police shutdown.

A shop owner, who asked to remain anonymous, told Sky News that the man had taken a knife from a high street shop before the attack.

London Ambulance Service Strategic Commander Graham Norton said: ‘We were called at 1.58pm today to reports of an incident in Streatham High Road.

‘We are working closely with the other emergency services and are treating a number of patients at the scene… We will provide more details as soon as they are available.’

Metropolitan Police issued an initial statement that said: ‘A man has been shot by armed officers in #Streatham.

‘At this stage it is believed a number of people have been stabbed… The circumstances are being assessed; the incident has been declared as terrorist-related.’

They have since released an update that read: ‘We believe there are two injured victims.

‘We await updates on their conditions. The scene has been fully contained.’

One officer was filmed telling pedestrians that the suspect was wearing a possible suicide vest before directing them away from the scene.