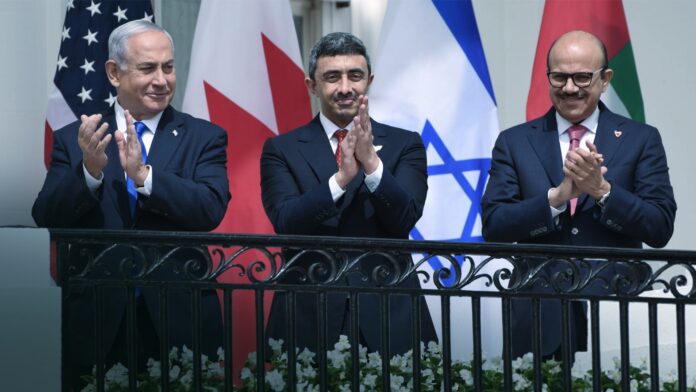 Minister of State for Foreign Affairs for the United Arab Emirates (UAE) Anwar Gargash addressed Iranian aggression and Turkish hypocrisy as motive for the UAE’s new ties with Israel.

While the new diplomatic relationship between Israel and the UAE certainly seems unprecedented in several ways, there are also many reasons that make good sense as to why the UAE was willing to make such a move. According to the Minister of State for Foreign Affairs, Anwar Gargash, it was the aggression of Iran and the hypocrisy of Turkey that pushed the UAE to reconsider its relationship with the Jewish State.

While there is an overwhelming trail of evidence concerning Iran and Turkey’s hostile nature, one only needs to look at the way the two countries responded when the UAE announced its normalization of ties with Israel. Iran issued immediate threats (which they also did to Bahrain), and Turkey threatened to completely cut all ties with the UAE. Both countries accused the UAE of being ‘backstabbers’ to the Arab world.

Despite the UAE’s political disagreements with Israeli PM Netanyahu, Gargash stated, “…we need to open channels of communications because the Arab experience of having no communication with Israel has not really yielded any results.” He even went as far as saying that he believes the Palestinians will eventually come to appreciate the political shift in the Middle East.

What the leaders of the UAE – and now several other countries – are experiencing is the reality that the Arab World has failed them. Furthermore, they’re already experiencing the benefits of an alliance with Israel – and it’s only just the beginning.

Behold Israel in their article “A Step Closer – Examining Israel’s Newfound Relationship with the UAE and Its Biblical Implications,” explain how the new deal between the UAE and Israel is setting the stage for the fulfillment of Ezekiel 38:

Israel’s ‘treaty’ with the UAE is one with many to follow. It’s likely not long before other Gulf states follow suit. And in the process, this is further going to isolate Iran and Turkey, both of which partake in the future invasion (Ezekiel 38:3-6).

Regardless of what perspective you might have on the new deal, one thing is evident to us all – the prophetic stage is being set for the Ezekiel 38 scenario. Speaking in the future tense through the prophet Ezekiel, the Lord declared to the leader of this future invasion of Israel:

Ezekiel 38:11-13 KJV – “And thou shalt say, I will go up to the land of unwalled villages; I will go to them that are at rest, that dwell safely, all of them dwelling without walls, and having neither bars nor gates, To take a spoil, and to take a prey; to turn thine hand upon the desolate places that are now inhabited, and upon the people that are gathered out of the nations, which have gotten cattle and goods, that dwell in the midst of the land. Sheba, and Dedan, and the merchants of Tarshish, with all the young lions thereof, shall say unto thee, Art thou come to take a spoil? hast thou gathered thy company to take a prey? to carry away silver and gold, to take away cattle and goods, to take a great spoil?“

The UAE, sharing a border with southeastern Saudi Arabia, is within the confines of the ancient, biblical, post-flood settling of the tribes of Sheba & Dedan (Genesis 10:7). Sheba & Dedan (and other regions of the world) are described by the prophet Ezekiel as those who will protest the coming invasion of Israel. In other words, Israel’s new relationship with not only the UAE but several other countries in the region is another piece to the prophetic puzzle. From hostility to friendship, the UAE is now in a place where protesting the coming invasion of Israel is more of a reality than ever before, and the same can be said of Saudi Arabia. A treaty like this further confirms the setting that will be present at the time of the invasion as described by Ezekiel:

Ezekiel 38:14 KJV – “Therefore, son of man, prophesy and say unto Gog, Thus saith the Lord God; In that day when my people of Israel dwelleth safely, shalt thou not know it?”

Though a notorious region for conflict, Israel will be dwelling safely when this invasion takes place. Not only have they been safe and prosperous for some time; it’s only improving.

So, what implications are there for all Christians today, regardless of whether you approve or disapprove of this new era in the Middle East? If we see these prophetic truths playing out before our very eyes, we know that our redemption is near!