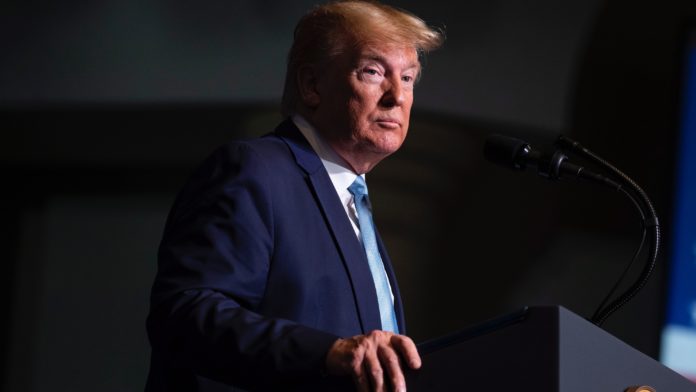 US President Donald Trump on Saturday issued stern warnings to Iran as tensions soared following the US killing of Iranian general Qassem Soleimani, threatening to hit dozens of sites should Tehran attempt to take revenge.

Trump blamed Soleimani for recent attacks on Americans in his response to threats from Iranian officials, who have vowed retribution for the killing.

“Iran is talking very boldly about targeting certain USA assets as revenge for our ridding the world of their terrorist leader who had just killed an American,” Trump wrote on Twitter.

“If Iran strikes any Americans, or American assets, we have targeted 52 Iranian sites,” Trump wrote. “Some at a very high level & important to Iran & the Iranian culture, and those targets, and Iran itself, WILL BE HIT VERY FAST AND VERY HARD.”

He said the number of sites represented “the 52 American hostages taken by Iran many years ago,” apparently referring to the 1979 Tehran embassy crisis.

Late Saturday night, the president tweeted again, this time warning Iran that the US will hit Iran “harder than they have ever been hit before!”

Trump followed up with another tweet, saying the US would use its “brand new beautiful” military equipment “without hesitation” if the Iranians retaliate.

Iran has vowed harsh retaliation for the death of Soleimani, the mastermind of its regional military strategy. He was killed early Friday near the Baghdad international airport along with senior Iraqi militants in a targeted US airstrike ordered by Trump.

The strike has raised fears of an all-out war, but it’s unclear how or when Iran might respond. Any retaliation was likely to come after three days of mourning declared in both Iran and Iraq. All eyes were on Iraq, where America and Iran have competed for influence since the 2003 US-led invasion.

Trump said he ordered the strike, a high-risk decision that was made without consulting Congress or US allies, to prevent a conflict. US officials say Soleimani was plotting a series of attacks that endangered American troops and officials, without providing evidence.

In his Saturday Twitter thread, Trump said that Soleimani “badly wounded many” Americans, and killed many people in his lifetime, including recently “hundreds of Iranian protesters.”

He blamed Soleimani for attacks on the US embassy in Baghdad earlier this week and said the Iranian was was “preparing for additional hits in other locations.”

Iranian revolutionary students stormed the American embassy in Tehran in 1979 and took 52 US staffers hostage for 444 days, less than nine months after the toppling of Iran’s American-backed shah. The US broke off diplomatic relations with Iran in 1980 and ties have been frozen ever since.

On Friday, Trump said “Soleimani was plotting imminent and sinister attacks on American diplomats and military personnel, but we caught him in the act and terminated him.”

“We took action last night to stop a war. We did not take action to start a war,” he said, adding: “We do not seek regime change.”

Before deciding on the strike, Trump was reportedly angered for days about the killing of a US contractor in Iraq on December 27, and ordered the airstrike on the Iranian general’s convoy as a response to the contractor’s killing and the storming of the US embassy by pro-Iranian protesters.

The US is seeing indications that Iran has stepped up its readiness to launch short- and medium-range ballistic missiles, according to a Saturday CNN report. US intelligence is conducting surveillance by various means to assess when the missiles could be ready to launch, the report said, citing an unnamed US official with direct knowledge of the issue.

Meanwhile, another unnamed US official told CNN that American defense chiefs were holding intense discussions as they try to ascertain whether Iran plans to retaliate in the next few days, with “conflicting views” on when a major attack may come.

An assault was definitely expected “within weeks” at maximum, the official said.

On Saturday a contingent of US troops set out from Fort Bragg, North Carolina, to Kuwait to serve as Middle East reinforcements. A US military spokesperson said that a total of 3,500 American soldiers will be deployed within a few days.

The UK sent two warships Saturday to protect shipping in the Strait of Hormuz at the mouth of the Persian Gulf.

US Secretary of State Mike Pompeo on Saturday spoke to Prime Minister Benjamin Netanyahu about Iraq and the Iranian threat to the region. It was the pair’s third phone conversation in the past week; Pompeo is believed to have briefed Netanyahu about the strike ahead of time.

Iranian Supreme Leader Ali Khamenei has said Tehran will react with “harsh revenge” to the hit on the popular general, who was his personal friend.

A senior Iranian commander on Saturday threatened that some 35 US targets in the Middle East, as well as Tel Aviv, were within reach of Tehran to avenge the killing of Soleimani.

Soleimani was the architect of Iran’s regional policy of mobilizing militias across Iraq, Syria and Lebanon, including in the war against the Islamic State group. He was also blamed for attacks on US troops and American allies going back decades.

After the early Friday attack, the US-led coalition has scaled back operations and boosted “security and defensive measures” at bases hosting coalition forces in Iraq, a coalition official said on the condition of anonymity according to regulations.

In a thinly veiled threat, one of the Iran-backed militia, Kataeb Hezbollah, or Hezbollah Bridages, called on Iraqi security forces to stay at least 1,000 meters (0.6 miles) away from US bases starting Sunday night.

“The leaders of the security forces should protect their fighters and not allow them to become human shields to the occupying Crusaders,” the warning statement said, in reference to the coalition bases. The group is founded by Abu Mahdi al-Muhandis, a senior Iraqi militia commander who was killed in the same strike.

On Saturday evening, a series of rockets were launched and fell inside or near the Baghdad Green Zone, which houses government offices and foreign embassies, including the US Embassy.

No one was injured by a Katyusha rocket that fell inside a square less than one kilometer from the embassy, according to an Iraqi security official who spoke on condition of anonymity because he was not authorized to speak to reporters. Another rocket in Baghdad landed about 500 meters from As-Salam palace where the Iraqi President Barham Salih normally stays in Jadriya, a neighborhood adjacent to the Green Zone, the official said.

Another security official said three rockets fell outside an air base north of Baghdad were American contractors are normally present. The rockets landed outside the base in a farm area and there were no reports of damages, according to the official.