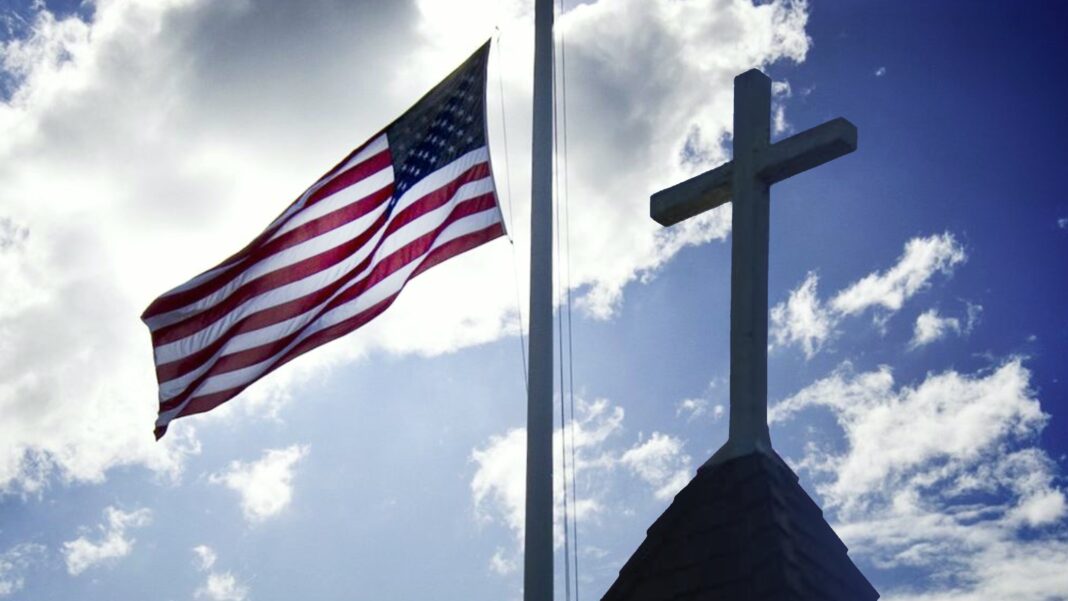 We now have many more questions than answers. How can we coexist with those who hate our God, who want to change America, promote immorality, silence opposition, suppress the truth, and are radically and rapidly transforming the nation we love?

A new poll shows more than 60% of voters say they view America as “less a representative democracy” and more a system that is run by wealthy elites. The same poll shows more than 40% of Biden voters and half of Trump voters agree it’s time to split the country. But is this even feasible?

The Bible says a kingdom, nation, or house divided against itself cannot stand (Mark 3:24-25). There are many serious problems and no easy solutions, so what can we do at this point? I am not being an alarmist, but right now at least at the federal level, two opposing parties are battling over a sinking ship.

It’s just a matter of time. Not only is America under attack from within, but we’ve been subjects of a demonic, destructive agenda to divide, conquer, and control. America is severely and irreparably splintered. For every point there’s a counterpoint; for every protest there seems to be a counter protest.

But even more tragic is the fact the church is divided as well – over many issues. How could this be? Many who claim to be Christian and attend churches across the country each week are not even saved. Why? Because they don’t know what it means to be a Christ follower, were not truly converted, and they don’t read the Bible.

If they don’t read the Bible and aren’t born again, then how then can they obey the teachings of Jesus.

Therefore, many so-called Christians easily justify sin and immorality in culture, government, schools, or in their own lives. A person can be very religious or works-driven without God – and many people are – but that doesn’t mean they have repented of their sins and fully trusted Christ for their eternal salvation.

A.W. Tozer put it this way:

“It is my opinion that tens of thousands, if not millions, have been brought into some kind of religious experience by accepting Christ and they have not been saved.”

If those within our own churches don’t agree on foundational moral issues, it’s time to address the problem. Pastors, are you listening?

We must confront this worldview war over two competing, conflicting agendas and visions of how to live and how the country should be run. Decades ago, fellow American citizens used to be able to simply agree to disagree on things and leave it at that. Not anymore.

Cancel culture is here to stay as today’s Democrat globalists are more progressive, socialist in their policy, and authoritarian in their actions. Now what?

“There cannot be a peaceful coexistence of two completely different theories of life, theories of government, theories of how we manage our affairs. We can’t be in this dire a conflict without something giving somewhere along the way.”

We are still blessed in America beyond the imaginations of most people around the world, but Limbaugh is right: something’s got to give. As ambassadors for Christ, how can we love, respect, and yet be separate from those who hate the God we worship?

The Bible asks many great questions including: “Can two walk together, unless they are agreed?” (Amos 3:3) and, “If the foundations are destroyed, what can the righteous do?” (Psalm 11:3).

Clearly, our foundations as a church and nation have been assaulted, and biblical morality is on a tragic and historic decline. Cultural Marxism has trampled our once-great nation.

Many on the godless left have said they just want to live and let live, or love who they want to love. They used to simply disagree with us and move on. But today, they’re activists; evangelists for Humanism and Atheism, wanting to force their antichrist belief system on everyone else.

Senior Editor for The Stream, John Zmirak has said, “the common ground we once shared is no man’s land.” He writes:

“Is there a truce possible between two halves of the country, when each side thinks the other so morally depraved they’re a threat to innocent kids, even their own? It’s not about having different religions. For 200 years we took our kids to church or not, or to synagogues, and agreed to differ. That’s how a healthy, pluralist society works…

“But the men who founded our country, and governed it till around 1960, used to agree on basic truths of natural law, knowable by reason. They agreed that a basic, tolerant Christianity with its mores anchored our view of the common good. They agreed that unborn life is sacred, marriage is between one man and one woman, and homosexuality is an unfortunate aberration: at worst a deadly sin, at best a heavy cross. Certainly nothing comparable to a person’s race or religion, which we must respect.”

If you’re a Bible-believing Christian, the left generally sees you and me as a problem because we stand for something true, hopeful, and eternal. We’re in their way. We are dregs to the power elites and secular humanists. Can this be resolved or are we too far gone?

In the poll mentioned earlier, citizens were asked to respond to the following statement:

“The situation in America is such that I would favor [Blue/Red] states seceding from the union to form their own separate country.”

Nearly half of voting Americans believe the nation’s political divide has become so toxic and irreparable that secession may well be the best solution.

Our constitutional republic is hanging on like the tattered American flag after the battle of Fort McHenry in 1814. If the last five years (and the eight years of Obama/Biden) have taught us anything, we have already been fighting a cultural and legislative civil war. There are battles in government, the courts, schools, media, and in the public square.

It seems obvious at this point there are many who want to see America change if not fail. Some are purposely destroying the country hoping to weaken the nation so the global socialists can remake us according to their wicked worldview, likeness, and vision.

In his book, How To Destroy America In Three Easy Steps, Ben Shapiro explains that the bottom line is those who hate the country insist we were born in sin, so to speak. He writes:

Author Matt Walsh of the Daily Wire did an unscientific social media poll last year with 52,000 people responding. Not surprisingly, over 60 percent support a plan to break up the United States into separate countries based on political affiliation and government. But it won’t work.

How do we divide or allocate resources such as first responders, the military, natural resources, and schools? Moreover, there are Christians and conservatives in every blue state, just like there are socialists and progressives in every red state.

The gospel of Jesus Christ is the only lasting solution. When people turn to God, He changes hearts, then their worldview changes and their behavior lines up with His Word.

Let me be clear that repentance and a revived America is preferable to divorce or secession, but repentance must begin with lukewarm, wayward churches and it’s not looking good. We’re too comfortable.

The church must take the lead and respond before it is too late and impact culture again as salt and light. For Christians, we must not unite with those who are advancing evil agendas diametrically opposed to biblical values.

Ken Ham, founder of Answers in Genesis has a new book out called Divided Nation, and he declares that everyone has a worldview and believes in something. There is no longer any neutrality; this key truth will help us better understand what’s going on in our church and country.

Ham points us to God’s Word which clearly teaches:

What can we do? Keep the faith, hold the line, share the Gospel, speak the truth, and pray, pray, pray. Our country continues to splinter at an alarming rate and I do not see a way around the inevitable fall of our nation. Take heart. It’s prophetic.

I have been praying for wisdom more frequently in the last few years than I have in all my life. The Bible says, “The fear of the Lord is the beginning of wisdom, And the knowledge of the Holy One is understanding” (Proverbs 9:10).

The Bible also says, “The fear of the Lord is to hate evil” (Proverbs 8:13). We must not be ignorant of evil, nor should we allow evildoers to go unchecked and unchallenged.

Benjamin Franklin once said about the USA that without relying on God’s continued aid,

“We shall be divided by our little partial local interests; our projects will be confounded, and we ourselves shall become a reproach and bye word down to future ages.”

The left has been rewriting American history and removing the Judeo-Christian influence. But our purpose under God has not changed. There are seasons in which we must shake the dust off our feet and move on. Jesus told His followers to do this when someone refuses to hear the gospel or “does not receive you.”

Do we separate from evil, or do we ignore – or worse, accommodate it? King David wrote with raw emotion at times and one verse that may be applicable to our great divide is Psalm 119:53 which states:

Psalm 119:53 KJV – “Horror hath taken hold upon me because of the wicked that forsake thy law.”

We, too, should have a hatred of wickedness and a refusal to align ourselves with those who reject the truth of God.

We can confront and expose deeds of darkness (Ephesians 5:11) while promoting truth and righteousness. Burning indignation should seize us! This is not the hour for weak witnesses and silent believers. Exalt Jesus and shine your light in the darkness, my friend!

But when it comes to politics, we must also lose the ‘top down’ mentality and stop praying to ‘our father who art in Washington.’ Government is not God! No matter what happens in D.C. or comes out of the White House, most of us can do something in our spheres of influence.

We are ambassadors for Christ, not secret agents. We can have influence at the local level. Examine your faith to make sure you are saved and walking in truth. By working on our families, churches, and communities, good things will come.