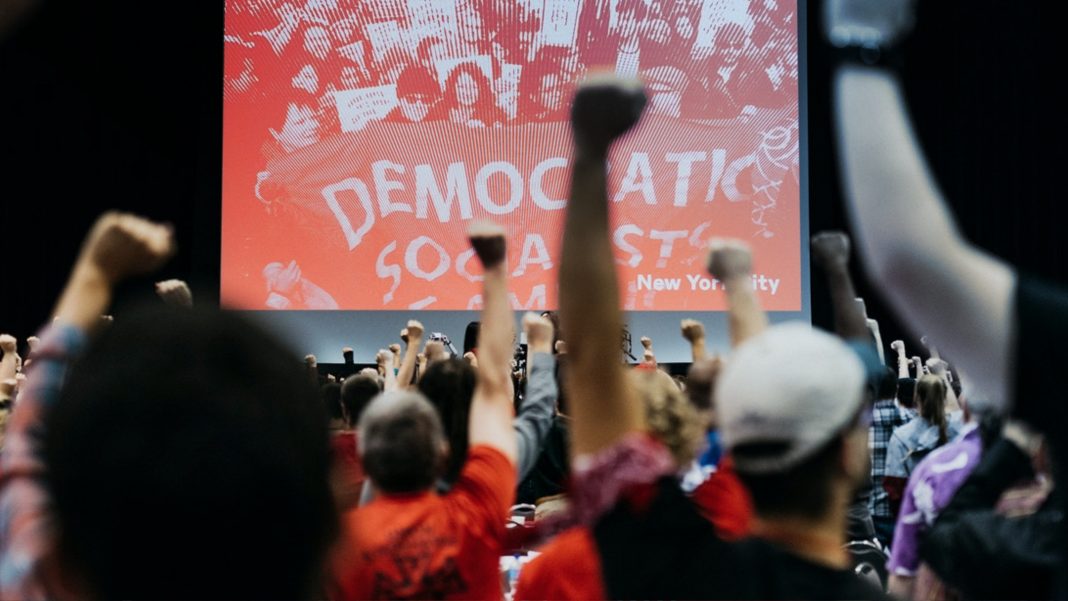 Teen Vogue urged its young readers in a recent online publication to “mobilize toward building a socialist future” and “shift the tide in favor of socialism,” describing it as “the only system that will guarantee us a livable planet and life unburdened from economic exploitation, crushing debt, and racial castes,” while claiming, “there is no future for us under capitalism.”

Noting that some of the “defining life experiences” affecting one’s political consciousness occur during adolescence, Walsh described herself as “a 17-year-old socialist” who attributes a “fascist presidential administration, pandemic, economic collapse, and a historic uprising for Black lives” to having shaped her generation’s worldview.

“These defining events and movements have caused Gen Z to become more disillusioned with capitalism and the white-supremacist, bourgeois state than older generations,” she wrote.

Walsh then urged members of her generation “to mobilize toward building a socialist future,” noting that Gen Z is “especially open to ideological radicalization.”

Having watched capitalism “fail time and again” and having “experienced two of the country’s worst recessions,” Walsh described her personal experience of “risking [her] life” to work during the pandemic.

“When I regained employment after Massachusetts reopened, I witnessed capitalism’s lack of regard for human life firsthand,” she wrote. “Going to work meant risking my life to perform labor because the ruling class had decided that dead frontline workers were just the collateral damage of their profit-motivated reopening.”

Walsh described being motivated to join the DSA while working at a restaurant that closed due to the coronavirus in November, as well as due to prior experiences while “climate organizing.”

“My belief in socialism was strengthened during my time as a frontline worker, but it originated earlier, when I first became engaged in politics through climate organizing,” she wrote.

“I recognized capitalism as the root cause of the climate crisis and realized that the environmental justice for which I was fighting posed a threat to capitalism’s very existence as a system of profit and exploitation,” she added.

Walsh claimed, “Looking at the world through the lens of class conflict and historical materialism has made everything I had never been able to explain make sense.”

What continues to mystify me is how anyone my age can still have complete faith in capitalism, a system that is driving our planet to literal inhabitability,” she added.

The “climate crisis,” too, necessitates “Gen Z’s commitment to socialism,” according to Walsh, who then quoted the DSA:

As DSA’s Ecosocialist Working Group explains, “The liberation of people and the planet are necessarily intertwined and dependent on the dismantling of our exploitative capitalist production process and the remaking of society to serve the needs of people and planet, not profit.”

“Human survival will depend on revolution,” she added, warning that “‘survival mode’ under late-stage capitalism” means enduring “the endless exploitation of the Earth’s natural resources”:

We will have to survive floods, heat waves, forest fires, and air pollution; watch our homes sink under water; the collapse of food supply chains; and power grids that give out. The working class will suffer while the rich will be able to move to higher elevations and build safeguarded homes.

Walsh then claimed that organizing will be driven “by an impulse to save the human race.”

Generation Z has already demonstrated its ability to “organize and mobilize,” Walsh stated, citing “young Black activists who led Black Lives Matter protests, and young allies who participated and made it likely the biggest movement in U.S. history.”

In addition, young voters have begun turning out in record numbers, according to Walsh, and are responsible for propelling Joe Biden to victory in key swing states.

Their “digital fluency” provides them with “a unique platform to organize, disseminate information, and share our beliefs,” with social media exposing them to “new ideas that antagonize our current belief systems, induce change, and push us toward ideological clarity,” Walsh stated.

“Centering Black liberation in our movement for socialism is a moral imperative that will also allow us to engage young people who were politically radicalized by Black Lives Matter and counter the neoliberal co-optation of racial justice organizing,” she added.

Walsh called on her generation — “whose souls have not yet been crushed by capitalism” — to utilize their tools and “shift the tide in favor of socialism,” which she described as “the only system that will guarantee us a livable planet and life unburdened from economic exploitation, crushing debt, and racial castes.”

She then said, “We are counting on millennials, Gen Z, even Boomers to guide us into the socialist movement so we can work together to empower the working class.”

“I urge the socialist movement to meaningfully invest in youth activation and the once-in-a-lifetime opportunity we have to mobilize Gen Z. And I urge my peers to join their local DSA or YDSA chapter and start organizing,” she wrote, adding, “The future belongs to young people, but there is no future for us under capitalism.”

In response, Young Democratic Socialists of America (YDSA) called on the youth to join the socialist movement, stating, “It’s clearer with every passing day that young people need an alternative to capitalism. But only a mass movement will get us there.”

In November, Teen Vogue columnist Kandist Mallett blasted America while calling for a range of radical motions and criticizing any notion of unity.

In the essay, titled “There’s No Such Thing As a United America,” Mallett wrote that the U.S. is rooted in “divisiveness,” was founded “through the genocide of Indigenous peoples,” and flourished “through the enslavement of Africans.”

“At its core, America’s values are white supremacy and capitalism,” she wrote. “That is true no matter who has been in office.”

In June, an Axios and Momentive poll found that a majority of young adults, aged 18-24, in the United States have a positive view of socialism.

Socialism has specifically been gaining ground among millionaire entertainment industry elites as Hollywood’s brand of corporate leftism has proven to be insufficiently radical for a growing number of showbiz professionals, as reported by Breitbart News last month.

A study published in July showed that socialism appeared to have gained a strong foothold with the younger generations of Britons, with over two-thirds of Millennials and Generation Z in the U.K. preferring to live under a socialist economic system than the free market system currently enjoyed in Britain.

Franklin Graham recently wrote about the growing support of Socialism in the United States, warning, “Godless socialism and communism are threatening our very way of life.”

“America is under attack from within,” Graham stated. “Godless socialism and communism are threatening our very way of life in this country and the inroads already made are shocking. Even though no one has fired a shot, the battle is raging and we’d better wake up before it’s too late. It’s like some people have blinders on and don’t see the dangers of what is coming down the road.”