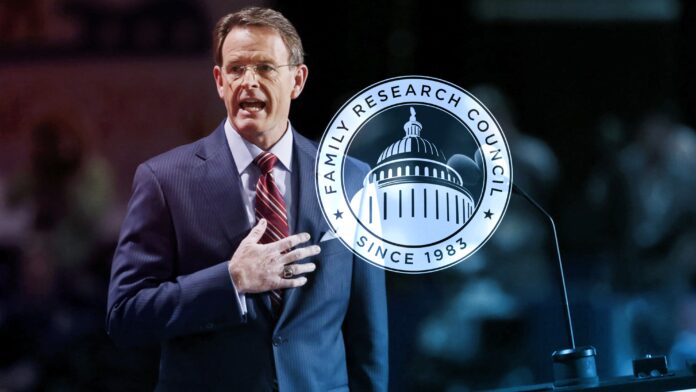 A California-based fundraising software company has terminated its contract with the conservative, Christian-based Family Research Council (FRC), citing the designation of FRC as a “hate group” by the far left Southern Poverty Law Center’s (SPLC).

As a part of its Pray, Vote, Stand campaign, FRC hosts weekly Wednesday night broadcasts with its president, Tony Perkins, political experts and conservative leaders in an effort to educate voters on the issues of faith, family and religious freedom.

For these events, the nonprofit organization typically relies on MobileCause’s text messaging services to send the broadcast link to thousands of supporters. But on Sept. 2, MobileCause CEO Victor Limongelli sent an email—one hour before the broadcast was scheduled to go live—informing FRC that it was terminating their agreement after three years.

“With no time to implement a back-up plan, FRC was prevented from sending out text invitations to tens of thousands of our followers to join the broadcast,” Perkins said.

The software company told CBN News it terminated its agreement with FRC when it became aware that the organization was designated as a “hate group” by the Southern Poverty Law Center. “MobileCause works with thousands of organizations across the ideological spectrum, but has a long-standing corporate practice of not working with organizations on the designated SPLC list.”

Yet when The Christian Post informed MobileCause of how the SPLC’s “hate group” label prompted a Virginia man to open fire at FRC’s Washington, D.C., headquarters in 2012, the company said it had not heard about the shooting. The gunman later told FBI agents that he saw FRC on the SPLC website and wanted to “kill as many as possible.”

“We have been referencing the SPLC site as a readily and publicly available list, but given the new information that we’ve learned, we’re going to undertake an analysis of the SPLC list and the criteria it uses, and then make a determination as to whether we should rely solely on its list,” MobileCause said in response to The Christian Post.

In the meantime, FRC plans to “mount a counter-offensive” against MobileCause.

“MobileCause has not only provided yet another example of big tech censorship,” Perkins said, “but in their desperation to silence those they disagree with they have now added religious discrimination to their portfolio. Is it a coincidence that a big tech company pulled the plug on us one hour before the second installment of one of our most extensive evangelical voter education and mobilization efforts in this election cycle? The big tech agenda is beyond obvious. MobileCause views evangelicals and conservatives as a political enemy that must be silenced, and so it timed its religious discrimination for maximum effect.”

The left’s determination to silence voices with which they disagree should make clear to every evangelical voter what is at stake in this election and why they need to pray, vote and stand, Perkins said.

“Big tech, Hollywood and the elites intend to decide this election, and they will resort to religious discrimination, censorship and bullying to get that mission accomplished,” he added. “We cannot, and we must not, allow them to succeed.”