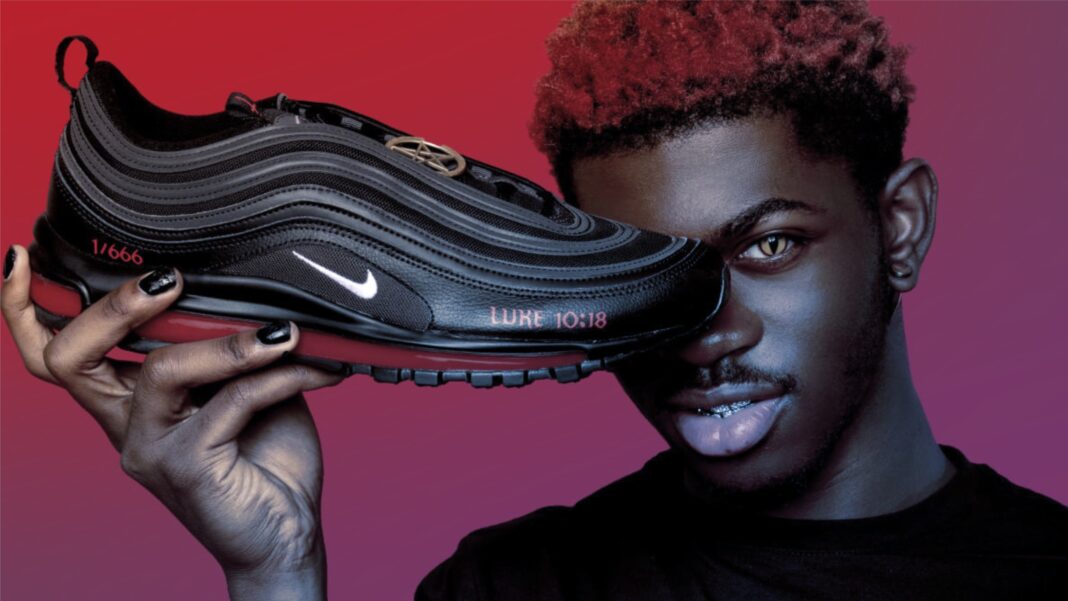 Rapper Lil Nas X, also known as Montero Lamar Hill, rolled out a limited edition pair of Nike sneakers featuring satanic imagery and a drop of human blood to coincide with his new music video that depicts him giving Satan a lap dance.

The so-called “Satan Shoes,” which are 666 individually numbered pairs of Nike Air Max 97s that were modified by the company MSCHF, will be going for $1,018 beginning March 29.

[Hill] is putting out a limited release of Nike sneakers that are all about the Prince of Darkness and his kingdom … right down to the box artwork and even the shoe design itself, which features a pentagram emblem sitting on the laces.

There’s also a 666 reference toward the back of the shoe … with another number in front of it, alluding to which limited unit it is. Word is, MSCHF/Nike are only dishing out 666 of these puppies to the public … so if you have 6/666, that seems to mean you got the 6th model.

Here’s the kicker … apparently, these shoes will contain one drop of human blood somewhere along the soles. And no, not the metaphorical blood, sweat and tears of the factory workers who will presumably put these together … like, actual plasma-filled red stuff.

Hill’s infernal footwear coincides with the release of the graphic new music video for his new song “Montero (Call Me By Your Name),” which trended at the top of YouTube with more than 25 million views as of Sunday afternoon. Replete with biblical and occult imagery, the video depicts Hill being sexually seduced in the Garden of Eden by Satan in serpentine form, after which the camera cuts to the forbidden Tree of the Knowledge of Good and Evil, which is famous for its role in the Book of Genesis and the fall of man.

Etched into the tree’s bark is an ancient Greek quote from Plato’s “Symposium” that translates: “Now when our first form had been cut in two, each half in longing for its fellow would come to it again.” The passage is a reference to ancient pagan views of dualism and sexuality, that humans were originally male, female, and androgynous, and that homosexuality is an attempt to recover one’s primal nature.

After being stoned to death by judgmental figures ostensibly condemning him for his sexuality, Hill then ascends toward an angelic being in heaven before sliding down to hell on a stripper pole. He discovers the devil sitting on his throne encircled with Latin that translates: “They condemn what they don’t understand.” After giving a lap dance to Satan, who happens to be wearing the expensive Nike shoes he is selling, Hill snaps his neck and assumes his horned crown.

Hill said dethroning Satan is symbolic of “dismantling the throne of judgment and punishment that has kept many of us from embracing our true selves out of fear,” according to Rolling Stone.

David Harris, magister for the Church of Satan, praised Hill for the video, telling Rolling Stone: “He obviously did his homework. Whether he consulted with us directly or did his own research, he clearly put a lot of effort into this video.”

The Church of Satan, founded by Anton LaVey in 1966, claims not to worship Satan as a deity but rather elevates the self and one’s own will as supreme. “Basically we worship ourselves. We refer to ourselves as I-theists,” Harris told Rolling Stone. “We see ourselves as our own god.”

The shoes were modified out of Nike Air Max ’97s, complete with an added drop of human blood and a $1,018 price tag. And they come with a Bible verse on the side, too. It’s Luke 10:18: “He replied, ‘I saw Satan fall like lightning from Heaven.’”

(For the record, Nike itself disclaims any connection of partnership with MSCHF. “Nike did not release nor design these shoes,” the company told the “fact-check” site Snopes in an email.)

If you like Satan iconography and don’t read the Bible, this sounds really cool. It’s not.

Verses 17-20: “The seventy-two returned with joy, saying, ‘Lord, even the demons are subject to us in your name!’ And [Jesus] said to them, ‘I saw Satan fall like lightning from heaven. Behold, I have given you authority to tread on serpents and scorpions, and over all the power of the enemy, and nothing shall hurt you. Nevertheless, do not rejoice in this, that the spirits are subject to you, but rejoice that your names are written in heaven.’”

In other words, the “lightning” reference alluded to the victory of God over Satan. In fact, if you haven’t read the Bible, here’s a spoiler alert: Satan ends up losing. A lot. And while he wins some battles — arguably starting in the Garden of Eden — he gets trounced over and over again.

Some of those battles may seem appealing as imagery, sure. The imagery used in Luke 10:18 isn’t appealing upon any close reading — but I suspect this wasn’t so close. Someone saw the words “Satan” and “like lightning” used together and thought, “Whoa, that’s dope.”

But the reality is, they’re using a passage about the defeat of the prince of sin himself to make sin look appealing. Of all the passages that could be used to sell Satan from the Bible, they couldn’t have done much worse.

However, while Lil Nas X is lap-dancing with the Devil and MSCHF is walking away with your $1,000 and a lot of free publicity, I’d like them to read another passage about Satan — this one Isaiah 14:12-16:

“How you are fallen from heaven, O Day Star, son of Dawn!,” it reads.

“How you are cut down to the ground, you who laid the nations low! You said in your heart, ‘I will ascend to heaven; above the stars of God I will set my throne on high; I will sit on the mount of assembly in the far reaches of the north. I will ascend above the heights of the clouds; I will make myself like the Most High.’

“But you are brought down to Sheol, to the far reaches of the pit. Those who see you will stare at you and ponder over you: ‘Is this the man who made the earth tremble, who shook kingdoms?’”