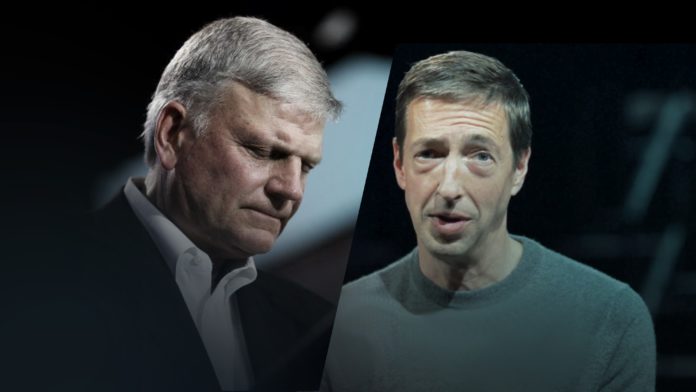 Rev. Franklin Graham expressed disappointment Thursday that President Ronald Reagan’s son boasted about his atheism in a recent ad for the Freedom from Religion Foundation (FFRF).

“I was saddened to see the news that President Ronald Reagan’s son, Ron, Jr., is a self-proclaimed atheist, and proud of it,” Rev. Graham wrote in a Facebook post on Thursday.

“His father was certainly quite different—President Reagan had a deep faith in God and in His Son, Jesus Christ. Ron, Jr., was in a television advertisement to raise money for the Freedom From Religion Foundation that aired during the Democratic debate this week and got a lot of attention. He boasted in the ad that he was a ‘lifelong atheist, not afraid of burning in hell.’ Wow.”

“It is, of course, his choice to believe or not to believe in God and His plan of salvation through Christ. But whether an individual “believes” in God, heaven, or hell doesn’t change the reality. The Bible tells us that hell is a place of torment, fire, and separation from God— and hell awaits those who do not repent of their sin and put their faith and trust in Christ. Let’s pray that Ron will know the saving love of Jesus Christ and turn to Him before it is too late.”

The ad, which aired during the Democrat debate in Westerville, Ohio, on Tuesday night, sought to raise money for the FFRF and became the top trending search on Google during the CNN event.

“Hi, I’m Ron Reagan, an unabashed atheist, and I’m alarmed by the intrusion of religion into our secular government,” Reagan stated in the commercial.

That’s why I’m asking you to support the Freedom From Religion Foundation, the nation’s largest and most effective association of atheists and agnostics, working to keep state and church separate, just like our Founding Fathers intended. Please support the Freedom From Religion Foundation. Ron Reagan, lifelong atheist, not afraid of burning in hell.

However, critics were quick to voice their opinions of the ad’s message.

“This is the left. They booed God at their convention,” tweeted Turning Point USA founder Charlie Kirk:

Prior to the debate on Tuesday, the FFRF stated that the “iconic” ad had been censored from the ABC network when it tried to air the commercial during the Democrat debate on September 12.

The 30-second spot (the first freethinking ad believed to have ever run during a presidential primary debate) will be shown twice during the Oct. 15 debate itself, and also during the primary debate pre-show and post-show. The ad will also air Wednesday on “The Lead with Jake Tapper” (4-5 p.m. Eastern), “The Situation Room with Wolf Blitzer” (5-7 p.m.) and “Anderson Cooper 360” (8-9 p.m.).

Radio host Rush Limbaugh called it “one of the most perfect ad placements in the history of advertising,” adding that “you want to reach a bunch of people that don’t like God, don’t like religion, and have no fear of hell because they don’t think it exists and so they don’t mind burning there? Run this ad in a Democrat debate!” he concluded.