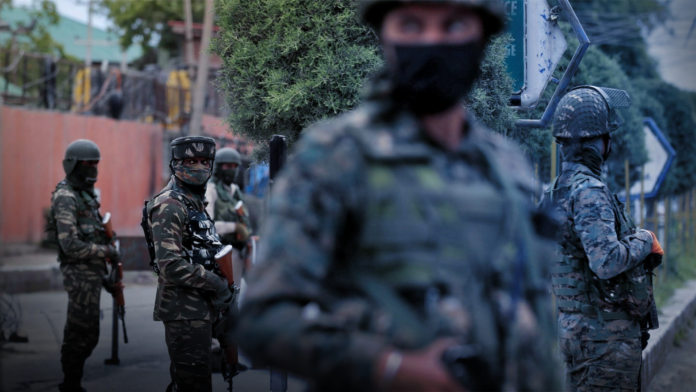 Unnamed Indian Army sources told the Times of India on Wednesday that Indian and Chinese troops have fired shots at each other at least three times in less than a month.

Both nations revealed only one incident this month in which troops fired alleged “warning shots,” blaming each other for the bullets. Indian government officials have admitted that their troops fired warning shots, but Chinese officials have not. Following Beijing’s initial denial, Indian media outlets published photos, allegedly sourced from military officials, showing Chinese troops on the border carrying rudimentary firearms.

The gunfire was the first to occur on the border in 45 years thanks to a mutual agreement to modify military rules of engagement to prohibit soldiers from using firearms there.

Last week, the top diplomats of both nations signed an agreement during a visit to Moscow, Russia, to deescalate tensions on the border. The five-point deal did not specify any concrete actions necessary to dispel the heated atmosphere on the border.

India and China have experienced a surge in border tensions over the summer following the deadliest exchange between their two armies in 60 years, occurring in June. The two have reported several incidents on their Himalayan border – connecting Chinese-occupied Tibet to India’s Ladakh region – since then, the latest culminating with India establishing a solid troop presence on a mountaintop overlooking Pangong Tso, a lake on the border.

India changed its rules of engagement to allow the use of firearms on the border following the brawl in June. The Chinese Communist Party accused Indian troops of firing at People’s Liberation Army (PLA) soldiers near Pangong Tso in early September. The Times of India‘s sources claim soldiers actually fired the first shots in late August.

“The first incident happened when the Indian Army preempted the Chinese attempt to occupy heights near southern bank of Pangong Lake between August 29-31 while the second incident occurred near Mukhpari height on September 7,” unnamed “Army sources” told the newspaper.

The Times of India added that, allegedly, “in the third incident, which occurred on September 8 near the northern bank of Pangong lake, troops of both sides fired more than 100 rounds as the Chinese side was behaving in a very aggressive manner.”

In a separate article, the newspaper went into more detail on the latest incident, again citing its sources in the military. Indian officials reportedly said they believed the incident, which occurred shortly before Indian Minister of External Affairs Subrahmanyam Jaishanka and Chinese Foreign Minister Wang Yi met in Moscow, was meant to intimidate Indian forces prior to the talks.

In a public statement on Wednesday, a spokesperson for the Indian Army’s Northern Command asserted that New Delhi was “prepared and more than capable of fighting a full-fledged war” against China.

“India is a peace-loving country and wishes to have good relations with its neighbors. India always prefers to resolve issues through dialogue. While talks are in progress to resolve the border issues with China in eastern Ladakh, at the military level it is well prepared for the prolonged stand-off,” the spokesperson reportedly said. The Army was reportedly responding to commentary in Chinese state propaganda outlets claiming the Indian military was ill-prepared for a war with the PLA, which India has repeatedly prevented from colonizing its territory in the past year.

The spokesman also addressed the most concerning issue for both countries in the immediate future: the upcoming Himalayan winter, in which temperatures drop to sub-zero levels and snowfall and other natural phenomena make navigating the terrain especially difficult.

“The most encouraging part for India is that the Indian soldiers have a huge experience of winter warfare and are psychologically tuned to operate at short notice,” the spokesman said.

Indian officials have witnessed a significant spike in the number of Chinese forces massing on their border. Defense Minister Rajnath Singh told the Indian Parliament on Tuesday that the military is preparing for any potential contact with an ever-growing number of PLA troops.

“China has mobilized a huge number of Army battalions and armaments along LAC [the Line of Actual Control, the formal name for the India-China border] and inner areas. There are many friction points in eastern Ladakh, Gogra, Kongka La, Pangong Lake’s north and south banks,” Singh said. He added, “China doesn’t recognize the traditional and customary alignment of the boundary. … India andChina border issue remains unresolved. Till now, there has been no mutually acceptable solution. China disagrees on the border.”

The increase in the number of PLA troops on the border follows a deadly hand-to-hand brawl in the Galwan Valley, a location in India’s Ladakh, in June. Indian soldiers encountered Chinese soldiers in the valley who had reportedly set up tents and surveillance equipment, despite being present on Indian land. When confronted about their activities there, the Chinese soldiers reportedly attacked with sticks wrapped in barbed wire, beating and in some cases stoning the Chinese. India has confirmed 20 deaths at the hand of the PLA and estimates that twice the number of Chinese soldiers died in the incident. Beijing refuses to publish a casualty count but denied the Indian estimate.

The skirmish that resulted in Indian troops occupying the mountaintop over Pangong Tso occurred after Indian troops observed PLA soldiers carrying tents and surveillance equipment in the area. Indian officials say it was necessary to occupy the mountain to prevent another Galwan Valley incident.

China insists Pangong Tso is part of China and that India has illegally colonized Chinese territory.