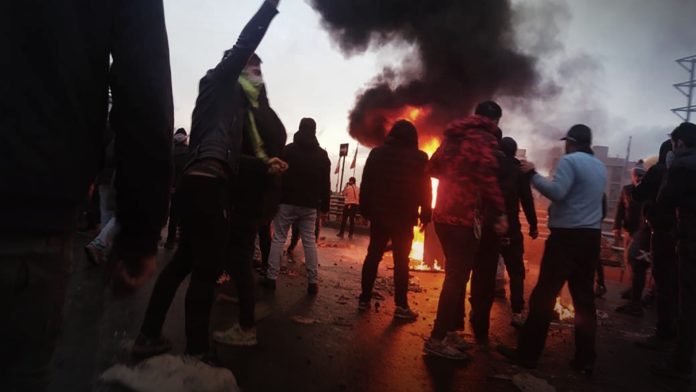 Iran’s protests come after massive protests across the border in Iraq where more than 300 have been killed by security forces. They also come amid protests in Lebanon. Iran has major allies in southern Iraq and Lebanon and Iranians have learned about the protests abroad through their own media, potentially fueling local decisions to rise up.

Protests appeared to begin in Iran’s southwest province of Ahwaz that borders Iraq. Six protesters were reported killed by locals and social media that support them. Because Ahwaz borders Iraq, where there are ongoing protests and because some locals speak Arabic, it is likely the protests were partly spillover.

However, they targeted slightly different issues, including anger at the Iranian regime and fuel prices. Video showed some important parts of the city engulfed in smoke and fire from various street protests. Gas stations were one target. Locals say fuel prices have risen fifty percent across the country.

On November 11 protesters had torn down the Iranian flag in Ahwaz representing larger anti-regime sentiment.

On Saturday protests spread to Tabriz in the north as snow blanketed Tehran. They had also spread to Mashhad, Bandar Abbas on the coast, Khorramshahr, Abadan, Shiraz and Sirjan.

Some protesters have targeted President Hassan Rouhani, who has been in power since 2013. Both Rouhani and the Supreme Leader Ayatollah Khamenei have slammed Israel over the weekend, seeking to distract from the chaos at home. Rouhani has said that the original plan was to increase fuel costs five-fold due to austerity measures at home. Rouhani has also called out corruption recently. He appears to be faltering and unable to control events, fighting off challenges by various rivals.

Videos, which are difficult to confirm, showed protesters burning banks across the country. In Tehran a Maskan bank branch was allegedly burned. Behbahan in Khuzestan province in the south. A video from Shiraz, 320 km to the east of the burning bank, showed hundreds of men rioting.

Protesters have shouted against Iranian involvement abroad, even condemning the regime for involvement in supporting Islamic Jihad in Gaza over the recent flare-up with Israel.

Some protesters argue that the regime has increased prices to fund Hezbollah in Lebanon and other foreign adventures. They also shout “down with the dictator,” in Tehran. They also chant against paying 3,000 toman a liter, around one dollar, for gas. In Andishe, south of the Caspian sea, people took over a Basij militia headquarters. In Eslamshahr, a twenty minute drive south, people protested against wasting money on “Palestine.”

In Chahardangeh, across the city of Tehran to the east of Eslamshahr, people came out in the rain. They did the same in Shahriar, also near Tehran. In the past the Basij has been responsible for suppressing protests. In some areas security forces retreated in the face of protests. In Urmia  the Kurdish region people chanted “the enemy is here,” a reference to the regime. Posters of the supreme leader were torn down in other cities. In Isfahan a protester was reported killed.

Iran’s regime has called the protesters vandals. Large spontaneous protests like this have taken place across Iran over the last decade. In December 2017 widespread protests broke out. The regime has generally weathered the storm through using force in some places and letting them sputter out in others. The numerous protests near Tehran may be due to the access to media networks, while the protests in Ahwaz and the Kurdish region may be fueled by other discontent in minority and neglected regions.