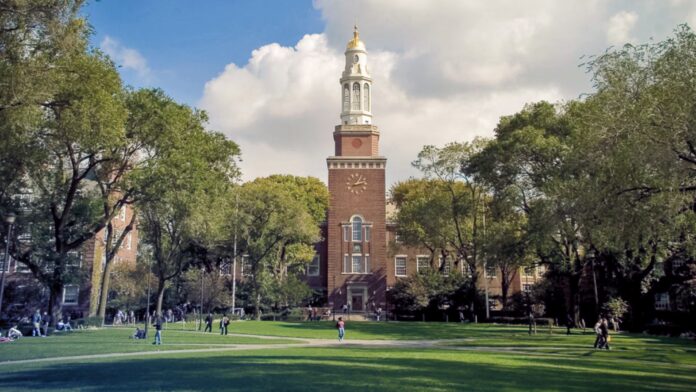 A professor at Brooklyn College in New York was told to change a classroom policy after The College Fix brought it up to the administration. The policy in question prohibited the “intentional misgendering” of the professor or anyone else in the class.

A source provided The College Fix with the syllabus as well as other relevant information for the class.

“My name is B. Call me B,” wrote Professor Brandon Aultman in the syllabus for a class on Fundamental Concepts in LGBTQ Studies. “I am nonbinary, transfeminine.”

According to Nonbinary Wiki, that term refers to a biological male “who seeks to present femininely, or to transition to look more feminine, or who identifies as more female than male.”

“I use gender-neutral pronouns (they/them),” Aultman went on to write in the syllabus. “I adhere to a strict policy of respect for the gender, sexual, and racial identities of my students. Intentional misgendering, as with any attempt to slur another student’s personal integrity on the basis of race, ethnicity, or religion, will result in immediate dismissal from class for that session.”

Aultman concluded that section by stating: “Continued abuses will result in disciplinary action with the appropriate administrators.”

The College Fix attempted to contact Aultman, who is not listed in the Brooklyn College faculty directory, through an old Yahoo! email address provided on Baruch College’s website, which is in the same system as Brooklyn College. That email, the only contact information The Fix could find, is currently deactivated.

The Fix reached out to Brooklyn College spokesman Richard Pietras about the syllabus. Pietras provided an official statement on behalf of the college.

“Brooklyn College was not aware of this classroom guideline,” the statement read. “The College believes that all classroom guidelines should be crafted to support learning, so the faculty has been asked to not dismiss students from the session, but rather to consider a range of effective pedagogies instead and to use the college policy with regard to gender discrimination.”

While the law does not include a definition of “transfeminine,” Aultman’s identity, it does define a few other terms.

Additionally, according to the law, “gender non-conforming” describes “a person whose gender expression differs from gender stereotypes, norms, and expectations in a given culture or historical period. Terms associated with gender non-conformity include, but are not limited to, gender expansive, gender variant, or gender diverse.”

The source who provided the syllabus to The College Fix mentioned the professor’s policy might have violated an administrative policy on classroom expulsions, which the source also provided.

The guide, titled Addressing Challenging Student Behavior at Brooklyn College, describes three situations in which faculty are supposed to take action: “behavior that causes you concern,” “a disruptive but non-threatening student,” and feeling “threatened by a student’s hostile behavior.”

There is some ambiguity as to what “intentional misgendering” would fall into. It would appear to be best described by the first category, “behavior that causes you concern.” In that event, the guide instructs faculty to reach out to students privately, rather than expel them from the class.

Pietras did not answer whether or not the policy violated any specific codes of conduct.

Although the college asked Aultman to change the policy, the Foundation for Individual Rights in Education, or FIRE, said professors do have leeway in how they administer their classrooms.

“Faculty members have broad latitude to direct the direction of classroom discussions,” Steinbaugh wrote, “including how students interact with one another. Repeatedly violating a professor’s parameters for discussion could form the basis for sanctions premised on disruption, if that disruption is substantial and material.”

If this world looks to be falling into deep delusion, you’re correct! What is very important to understand is that this societal confusion is rooted in a purposeful rebellion against God and his designs. God designed humans male and female (Genesis 1:27), he did not design them to be a question mark based on feelings and lusts.

Not only is the world now supporting and teaching this confusion to children, but they also demand that others go along with their rejection of God’s design. In the last days, the Bible says that all that live “godly in Christ” or by God’s moral standards outlined in scripture would be persecuted and hated (2 Timothy 3:12).

There have been many ramifications for this rebellion against the Lord. Romans 1, in discussing those that reject God’s design and fall into homosexuality says that “God gave them over to a reprobate mind”:

Romans 1: 26-28 KJV – “For this cause, God gave them up unto vile affections: for even their women did change the natural use into that which is against nature: And likewise also the men, leaving the natural use of the woman, burned in their lust one toward another; men with men working that which is unseemly, and receiving in themselves that recompence of their error which was meet. And even as they did not like to retain God in their knowledge, God gave them over to a reprobate mind, to do those things which are not convenient;”

The chapter then goes on to say that it’s not only them that do these things that are guilty but so are those who know God’s judgment and still “have pleasure in them that do them.”