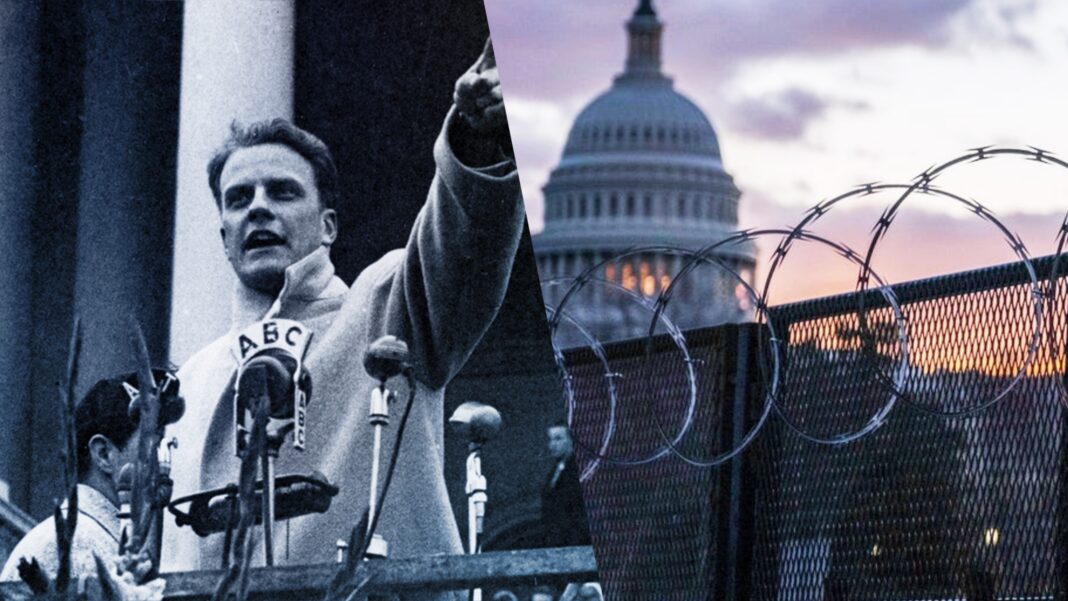 After almost 70 years, the National Day of Prayer this year looks very different in Washington DC. That is because the permit to hold the annual event at the capital was denied for the first time since 1952.

Since the U.S capital building breach on January 6th, the area remains closed off to the public, where the event would usually take place.

The man who sought to obtain the permit for the event, Rev. Patrick Mahoney, who is also director of the Christian Defense Coalition, rebuked the decision to deny the Prayer at the capital.

“After our permit was denied, for the first time in 70 years, there will be NO PUBLIC witness at the U.S. Capitol Building for the National Day Of Prayer! Brothers and sisters, free speech is in danger today in America,” he wrote on Twitter.

Mahoney also released a powerful statement in which he told Americans to ask themselves: “How is it possible to have public prayer prohibited at the Capitol on the National Day of Prayer?”:

It is deeply troubling for the first time in 70 years, there will not be a public prayer service at the United States Capitol Building on the National Day of Prayer. Every American needs to be asking the question, “How is it possible to have public prayer prohibited at the Capitol on the National Day of Prayer?”—especially when it is a national observance designated by Congress. The “People’s House,” as the U.S. Capitol Building is so rightly called, must be a place where all Americans are afforded the right to come and peacefully celebrate and express their First Amendment rights. Tragically, those rights and freedoms are being denied and prohibited. I will continue to work to ensure the “People’s House” is returned to the people and the First Amendment is once again celebrated and honored at the United States Capitol.

History of The National Day of Prayer

George Washington and Congress first called for a national recognition of Prayer in 1775, urging people to pray for wisdom from God regarding the War of Independence.

Abraham Lincoln also called for a Day of Prayer and fasting in 1863 during the Civil War:

Whereas, the Senate of the United States, devoutly recognizing the Supreme Authority and just Government of Almighty God, in all the affairs of men and of nations, has, by a resolution, requested the President to designate and set apart a day for National prayer and humiliation.

And whereas it is the duty of nations as well as of men, to own their dependence upon the overruling power of God, to confess their sins and transgressions, in humble sorrow, yet with assured hope that genuine repentance will lead to mercy and pardon; and to recognize the sublime truth, announced in the Holy Scriptures and proven by all history, that those nations only are blessed whose God is the Lord.

Now, therefore, in compliance with the request, and fully concurring in the views of the Senate, I do, by this my proclamation, designate and set apart Thursday, the 30th. day of April, 1863, as a day of national humiliation, fasting and prayer.

A National Day of Prayer was still, at that point, not yet a formally recognized celebration.

That is until Billy Graham in 1952 pressed the President and Congress to pass legislation that would formalize it. Graham held a peace rally on the east steps of the Capitol building called “The Hour Of Decision,” urging elected officials to remember God. Despite the rain, an estimated 40,000 Americans were in attendance, while millions watched live as Graham delivered his impactful speech.

“Surely a crowd of many thousands gathering beneath the great dome of the Capitol of the United States to pledge their allegiance to Almighty God and petition Him for divine help at this crucial hour is a most significant event,” the Evangelist told the crowd. “To freedom-loving peoples of the world, we are re-affirming our faith in the God of our Fathers … confessing our need of a Savior from our sin … and in humiliation and repentance beseeching Him to cleanse us from all unrighteousness.”

Two days later, legislation was introduced and passed unanimously by the House of Representatives and signed into law by Harry Truman in April 1952.

Since then, each President in office has recognized the “National day of Prayer.”

2021 is the first National day of Prayer since 1952 that there was no Prayer at the Capitol.

What Does This Mean For America?

Currently, the House of Representatives, Senate, and office of the President are occupied by a party who has been less than subtle about their opposition to Biblical truth. It is no secret that those in power seek to move the country far away from its Judeo-Christian founding and toward a secular society in which all depravity is excusable.

In a recent article, Jan Markell stated that the secularist in charge of America plan to “Take away every aspect of religious freedom.”

“The road ahead in America will be the greatest challenge ever for people of faith,” Markell expressed. “The Godless Left is now in charge of our country: White House, House, and Senate. And these secularists are urging all leaders to stick it to people of faith. To take away every aspect of religious freedom.”

“In their sights are churches, ministries, and individuals who refuse to see government as god,” she continued.

Markell then went on to explain that four years of former President Donald Trump, who defended Religious Liberty, was too much for the Left to handle.

“Four years of this environment was too much for secularists to tolerate. The Left wants people of faith to be targeted, bullied, and silenced.”

By denying the permit to this critical event, which was established for the acknowledgment and reverence of Almighty God, their message is clear. America no longer desires to retain God in their knowledge; they feel no need to repent or humble themselves despite the desperateness for which it is needed.

Romans 1:22, 28-32 KJV – “Professing themselves to be wise, they became fools… And even as they did not like to retain God in their knowledge, God gave them over to a reprobate mind, to do those things which are not convenient; Being filled with all unrighteousness, fornication, wickedness, covetousness, maliciousness; full of envy, murder, debate, deceit, malignity; whisperers, Backbiters, haters of God, despiteful, proud, boasters, inventors of evil things, disobedient to parents, Without understanding, covenantbreakers, without natural affection, implacable, unmerciful: Who knowing the judgment of God, that they which commit such things are worthy of death, not only do the same, but have pleasure in them that do them.”

For this reason, Franklin Graham, son of Billy Graham, held a massive “Prayer March” last September at the Capitol. Tens of thousands were in attendance at this event where Americans from across the country came together to Pray for America.

At the event, Graham petitioned God’s Throne for the United States, saying, “Father, our country is in trouble, and we need your help. I think we’re at a crucial point in this country. We’re that close to losing our nation.”

Franklin Graham, in a recent interview with Tony Perkins, explained that American Christians need to stand against this growing tidal wave of secularism:

“This is a time to stand and let your voice be heard now. Don’t just stand and be quiet. It’s time for the pastors to preach it from the pulpits and, I think, for denominations to stand,” he said. “The worst thing that could happen is for the Lord Jesus Christ to come back and find us sitting on our hands and keeping our mouths shut. When He comes back, I hope he finds us fighting and standing for truth.”

“I’m talking about standing up against this onslaught, this tsunami, this tidal wave of evil that is coming down on society today. I would encourage the church and pastors to speak out. This is the time for us to stand together and be one voice.”

It is only if today’s American leaders would follow the example laid out by Washington, Lincoln, and Graham by humbling themselves, genuinely repenting, and turning back to the Lord that God would heal the United States and be their God (2 Chronicles 7:14).

Unfortunately, with America nowhere to be mentioned in Bible Prophecy, the country has likely already crossed the Rubicon as its leaders wage War against the Creator in whose name they were founded.