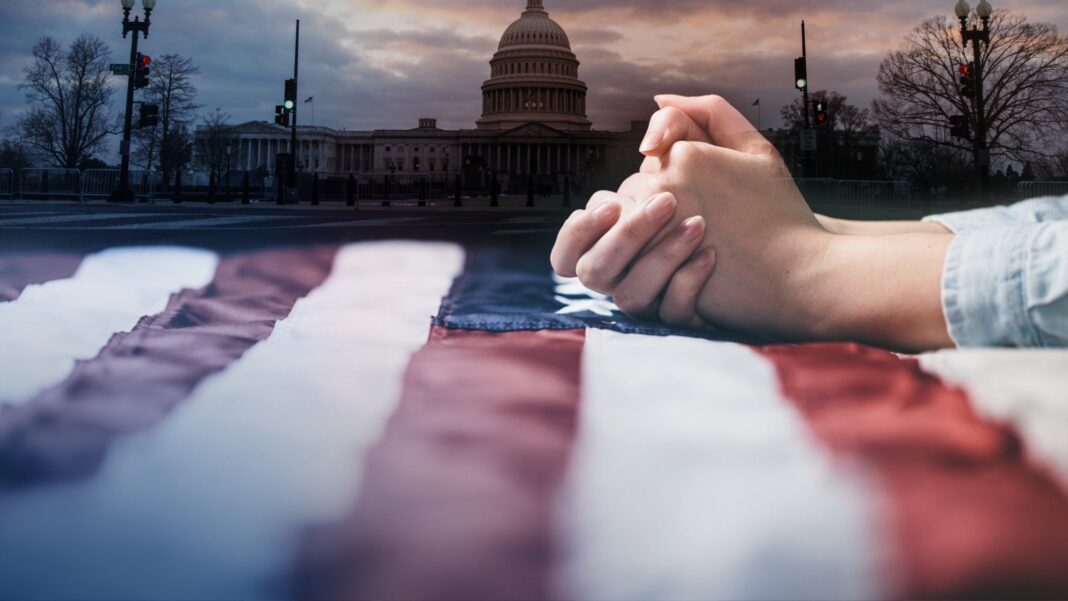 The road ahead in America will be the greatest challenge ever for people of faith. The Godless Left is now in charge of our country: White House, House, and Senate. And these secularists are urging all leaders to stick it to people of faith. To take away every aspect of religious freedom.

In their sights are churches, ministries, and individuals who refuse to see government as god.

In May of 2017 in the Rose Garden, President Trump used his executive pen to ensure Christians and other people of faith don’t have to check their beliefs when entering the halls of government. He also prevented the federal government from going after pastors and other leaders who speak about political issues from a moral perspective.

Four years of this environment was too much for secularists to tolerate. The Left wants people of faith to be targeted, bullied, and silenced.

So, new on the scene to counter Christians is the organization Secular Democrats of America. They see Christians as a “Christian nationalist movement” giving cover for “white supremacy.” They insist that rather than faith, Americans employ reason, science and evidence, and disentangle government policy from the influence of sectarian religious interests that have become dangerously entrenched at all levels of government.

This outfit has a 28-page document urging the Biden Administration to strip First Amendment rights from Christians who advocate for traditional biblical positions on the sanctity of life, marriage, education, and the family.

It encourages the purging of social conservatives from all levels of government. Christians are deemed enemies of the state. The document encourages that Christians be ostracized from society. A few extremists encourage sending Christians to re-education camps.

This is today’s Progressive, yet some Christian leaders discouraged believers from even voting in the 2020 election including Dr. John Piper. They were offended by the character of President Trump, but are okay with this new assault on every person who has faith.

Beth Moore called Trumpism “dangerous to the saints of God.” Really?? And today’s Progressive movement is not? Are you folks deluded?

Let’s go back to 2016 when Hillary Clinton stated that people with “deep-seated religious and cultural beliefs, cultural codes and structural biases have to be changed.” She was not challenged by anyone on the left. Do you think that a Chinese-supporting Biden Administration won’t welcome this challenge?

Yes, elections have consequences but that worn out phrase is hardly a comfort. Yes, the Bible calls the last days “perilous.” Yes, Romans 1 is the prevailing mentality of the last days—a depraved mindset. We just want that shining city on a hill back.

Reality check: That is very likely not going to happen ever again! What’s coming is the New World Order.

But Christians are still called to be salt and light and to delay the decay no matter how much we are persecuted! God has spent all of 2020 reminding us that this world is not our home. We are only briefly passing through. Why would anyone want to cling to this?

Source - July 31, 2021
'Members of the multiplicity community insist that they're healthy, happy, and even normal—they just have up to hundreds of personalities contained within one body.'

Founders of Ben & Jerry’s Reinforce Support for Decision to Boycott...

Jonathan Brentner - July 29, 2021
How much longer will the Lord’s patience endure in view of the senseless bloodshed and exceeding wickedness that grows worse by the day?