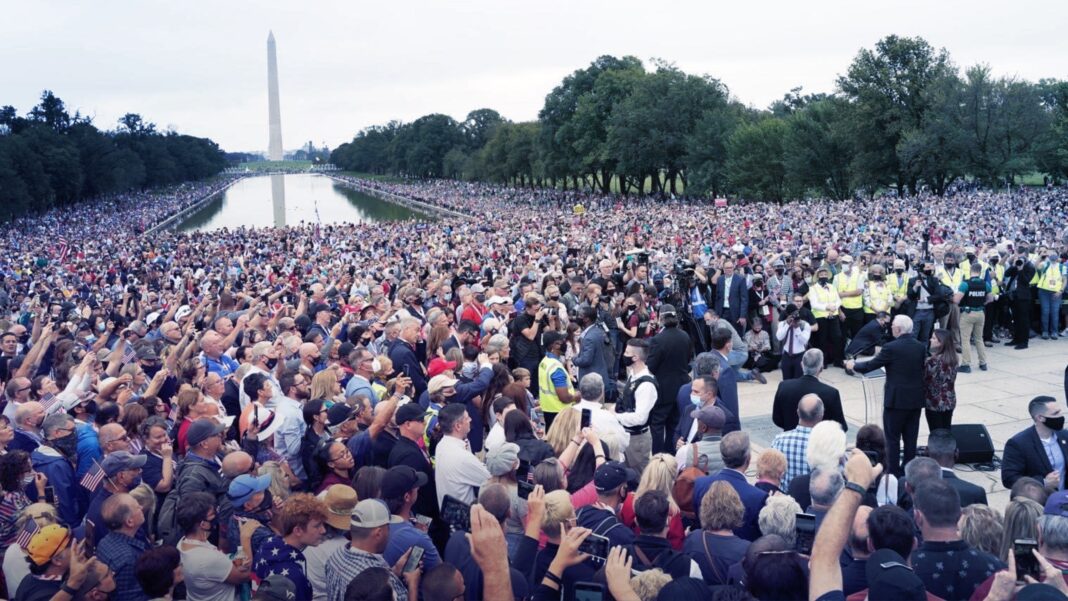 When Duane and Becky Cadotte got on the metro for the ride to the Lincoln Memorial Saturday, everyone around them had Prayer March lanyards on. All were headed to the same place to pray.

“God’s presence is here,” Duane said from the steps of the memorial, moments before the Washington Prayer March with Franklin Graham got underway.

The Vietnam veteran from North Carolina asked Christ into his life on a New Jersey boardwalk in his early 20s. Since then, he’s seen his faith grow—and his country take a downward turn in its commitment to God.

Quoting his pastor, he said, “We deserve judgment, but we need mercy.”

Since 2016, Franklin Graham has led numerous calls for prayer across America through the Decision America Tour. First, in each state capital, then across dozens more cities, most recently in Florida this past January.

“Father, our country is in trouble, and we need your help,” he said Saturday. “I think we’re at a crucial point in this country. We’re that close to losing our nation.”

Vice President Mike Pence made a surprise appearance at the Prayer March, urging all gathered to persevere in their prayers for America.

Like the Cadottes, so many in the crowd said they had to be there. Most walked, some pushing strollers, others with service dogs by their side. Some were in wheelchairs, while others leaned on walkers.

All were there to pray.

‘We Have to Take the First Step’

An hour before the march began, tens of thousands of people had already flooded the Lincoln Memorial and all sides of the Reflection Pool.

Slowly, hundreds of conversations came to a hush as one song prevailed over all. Together, thousands began singing “Amazing Grace,” voices filling the overcast skies and spilling onto the National Mall.

Shuang was raised in Shanghai, China, moved to the United States in 1988 and became a Christian shortly after. When her first marriage dissolved and other trials came, she was discouraged and blamed God, but in 2016 came back to Him.

She’s seen that kind of thing happen in America as a whole. When things are going well—when we’re experiencing prosperity—it’s easy to ignore God, she said. But when adversity falls upon us, we’re brought to our knees.

“We say ‘God bless America,’ but what does God want from America?” Shuang asked.

Standing beside her was her husband, Rick, who decided to follow Christ shortly after they got married. The two were baptized together on August 2.

When Shuang and Rick surrendered their lives to Christ, they had to repent of their sins and ask God’s forgiveness.

That’s what America must do as well.

“We have to take the first step because we’re the ones who moved away from Him,” Shuang said.

“I left China because of their … totalitarian government, anti-God, anti-Christian system, forcing Christians to worship underground. No equality, no religious freedom.”

Now, she said, she sees America headed in the same direction.

“It is very alarming to see how far the country has gone from God’s Word and Christian principles.”

A Nation on Its Knees

American-Hungarian pastor Andrew Brunson was in the crowd and led a prayer at one of the seven stops. Brunson was arrested in Turkey and imprisoned for two years from 2016-2018.

“The religious freedom that we have in this country is very rare,” he said. “People take it for granted because they have not experienced the persecution that many countries in the world have.”

Being imprisoned “forced me to pray,” he said.

Now, with hostility against Christians on the rise in America, the pressure is building, once again forcing God’s people to call on Him.

“God can do anything, but He always gives people a choice,” Shuang said. “He’s waiting on us to turn, so we’re turning. We need Him.”

Shuang cited Matthew 18:20: “For where two or three have gathered together in My name, I am there in their midst.”

Now how about tens of thousands?

“Everyone has come for the same purpose, and that is to pray,” Franklin Graham said. “Let’s pray every step we take, and let’s claim every step for God and rededicate this city for Him.”

As the sea of people moved from one location to the next, many prayed aloud. Some circled up in prayer at a street corner or sat quietly on a bench along the route, heads bowed in prayer.

One man sang “His Name Is Wonderful” in a deep voice as others around him joined in.

Frank “One Feather” Shutterlict came all the way from a Native American reservation in Washington state to pray for his country.

Peter and Farida Caoili of New York came with their three children, ages 14 to 20. This Filipino-Austrian-Indian family huddled outside the WWII Memorial to pray for America’s leaders, and unity and peace across the nation.

“This is just a small picture of what Heaven will look like,” Will Graham said, walking among the masses through the National Mall. “Everyone of all different backgrounds coming to the Lord together in prayer.”

God, Will You Hear?

In 1952, Billy Graham called for a national day of prayer from the steps of the U.S. Capitol.

On Saturday, thousands again filled the Capitol lawn, this time praying in unison.

One parked car with doors wide open had audio from the Prayer March playing at full volume as people stopped to listen. Anne Graham Lotz’s voice washed over the crowd:

“You have poured out your blessing on us, but God, we have not been faithful to you,” she prayed. “Would you hear? Would you forgive? Would you heal?”

Karen Brown and Victor Santos stood nearby. They met on a bus for the drive down from Pennsylvania.

COVID-19 has kept a large part of the population isolated over past months, they said, and welcomed the chance to gather with others in prayer.

Brown called it “empowering” to see so many unafraid to express their reliance on God—especially at a time Christians may feel like they’re standing alone in their faith.

“I feel like there’s been an active effort to present division in our country,” she said. Meanwhile, she added, freedom of speech is getting “trampled on.”

Santos—who was saved at a Billy Graham Crusade in New York decades ago—appreciates Franklin Graham’s initiative in calling people together to cry out to God.

“None of us would be out here if we didn’t believe God answers prayer,” he said.

When the Prayer March ended, thousands lingered at the Capitol, in no rush to get back to their homes, cars and hotels. Some clung to each other in prayer, just as millions around the country are clinging to God’s promise to heal, if only we will humble ourselves before Him.

2 Chronicles 7:14 KJV – “If my people, which are called by my name, shall humble themselves, and pray, and seek my face, and turn from their wicked ways; then will I hear from heaven, and will forgive their sin, and will heal their land.”