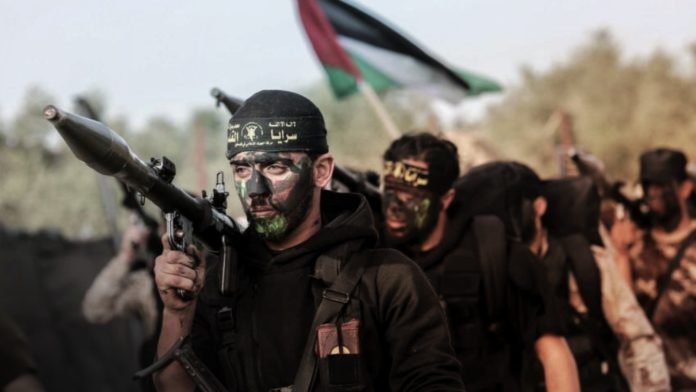 The Palestinian Islamic Jihad (PIJ) and Hamas sort out their differences amid their common enemy, Israel; the PIJ attacked a notable Hamas representative earlier this week; PIJ has criticized Hamas for not playing a bigger role in the attacks on Israel; al-Batsh: We share the same destiny and enemy.

The two terror organizations, Palestinian Islamic Jihad & Hamas, have resolved their differences (at least for the time being) after the PIJ attacked Hamas leader Mahmoud Zahar on Friday. The attack came in the wake of the PIJ criticizing Hamas for not playing a more significant role in the attacks on Israel. When Zahar arrived at a mourning tent on the Gaza Strip to offer his sympathies regarding the death of Bahaa Abu al-Ata, the PIJ threw rocks at him and his security as they chanted, “Death to Hamas!” and “Hamas go away!”. No injuries were reported.

Khaled al-Batsh and the father of al-Ata would later visit Zahar and apologize for what took place when he came to visit at the tent of mourning. In summary, al-Batsh stated:

“We apologize to our brother, Mahmoud Zahar, for the unfortunate incident that took place today. We wish to affirm our strong relationship with Hamas. We share the same destiny and enemy.

Ultimately, the motivation behind their willingness to move on from their differences is their mutual hatred for their common enemy, Israel. In the last week, the PIJ has launched over 450 missiles, resulting in zero Israeli deaths and a very high success rate by the Iron Dome.

As the two groups found common ground for reconciliation, they are reported to now be working together to “strengthen cooperation, coordination, and consultations…The two also praised the performance of the Palestinian resistance groups during the last confrontation with Israel.”

As all of these smaller terror proxies continue their campaign to destroy Israel, bear in mind that the financier and force behind them is none other than Iran.