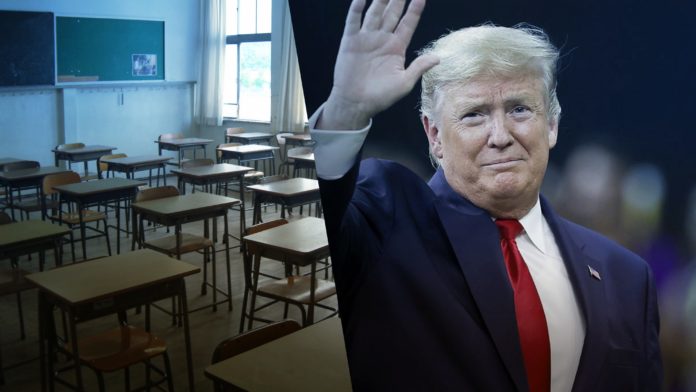 A history teacher at Loch Haven High School in Towson, Maryland, has come under scrutiny over a classroom lecture that compared President Donald Trump to the German Nazi Party and the communists of the Soviet Union.

According to a report by the Washington Times, a teacher at Loch Raven High School is facing criticism from Republican state lawmakers over her decision to compare President Trump to Nazis and communists during a classroom history lecture.

During an advanced placement history course lecture that took place earlier this year, students were shown a slide that featured an image of President Trump alongside a Nazi swastika and a Soviet Union flag. A caption on the slide stated that all of the images in the picture were associated with political movements that wanted to “round up a group of people and build a giant wall.”

Local lawmakers have pushed back aggressively after receiving a copy of the slide from Delegate Kathy Szeliga. “It is horrific. It is educational malfeasance,” Szeliga said. Another local politician argued that the lecture was a form of “propaganda” that should be eradicated from the classroom.

The school district confirmed that the slide was not provided to the teacher by the district or a third-party lesson plan company. More importantly, Baltimore County Schools spokesperson Charles Herndon claims that people have misinterpreted the slide.

“The topics being discussed in the class included World Wars and the attempts by some leaders throughout history to limit or prevent migration into certain countries. In isolation and out of context with the lesson, the image could be misunderstood,” Herndon said.