Israel’s Split Screen: Chaos Within and Without 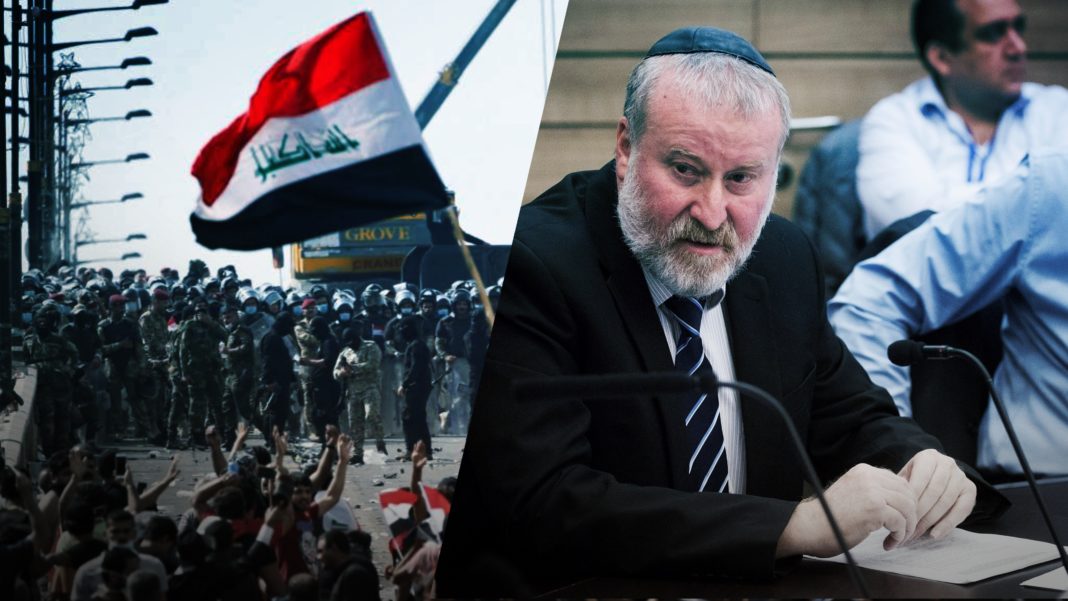 On the left side of the screen on Tuesday, 15,000 Israelis gathered Tuesday evening outside the Tel Aviv Museum of Art to demand legal justice for Prime Minister Benjamin Netanyahu in the face of what they view as an anti-democratic usurpation of the political power by Israel’s legal fraternity. They were condemned by the Left, by the legal fraternity and its court reporters as enemies of the “rule of law.”

On the right side of the screen, the streets of every major city in Iran were ablaze with protests as the people called out “Death to the Dictator” only to be greeted by the dictator Ali Khamenei’s shock forces. On his orders, the security forces responded to the protesters’ demands for freedom with live fire and mass arrests.

In normal times, the top story of the day for the past month would have been the story on the right side of the screen. The Iranian regime’s internet blackout didn’t stop the protests. According to opposition sources, anti-regime protests have spread to every Iranian province. Every socioeconomic class, every ethnic, religious and national group has joined them. The Iranian people have taken to the streets and demanded the overthrow of their regime despite the brutal violence the regime is using to repress them. According to opposition sources, by Tuesday, regime forces had killed 450 demonstrators and arrested between 7,000 and 10,000 people.

The protests in Iran were preceded and are now taking place in tandem with similar protests in Iran’s colonies Iraq and Lebanon. It is too early to know where they will lead. But what is clear enough is that current circumstances provide an opportunity for Israel to act in multiple ways to increase the instability and weakness of its most dangerous and powerful enemy. The Iranian regime, replete with its terror armies and nuclear installations, has never been in greater danger of losing its grip on power.

In normal times, a full screen of anti-regime protests in Iran, Iraq, and Lebanon would be followed by full screens of security cabinet meetings. We would see Facebook and Telegram videos of Netanyahu speaking in Farsi directly to the Iranian people and expressing solidarity with their aspirations for freedom. In response to requests by Iranian opposition forces, the government would restore Farsi-language Voice of Israel radio broadcasts, directly into Iran.

In a full-screen reality, we would have seen a more serious response to the statements that US Central Command leader General Kenneth McKenzie made to The New York Times last Saturday. In remarks to the paper, the US commander responsible for the Middle East said that the possibility Iran will attack the Gulf states and Israel has risen.

In the event, the Israeli response was limited to a statement Sunday by Netanyahu. On a tour of the Golan Heights with IDF commanders Sunday morning, Netanyahu said that Israel is fully committed to preventing Iran from attacking it.

In normal times, a statement like McKenzie’s would have been followed by a sudden trip to Washington by Israel’s defense minister to visit with his counterpart at the Pentagon.

Our times are not normal times. We are relegated to living in a split-screen reality because our government is incapable of carrying out any real action. Its paralysis is not the result of its status as an interim government. Israel has been living under an interim government for some time now. And its members, including the prime minister, have shown no aversion to doing their job responsibly.

The reason our government is incapable of fulfilling its duty, particularly on issues of strategic importance, is because Attorney General Avichai Mendelblit has decided that almost all government activities require his prior approval.

And Mendelblit is a very busy man.

Mendelblit is not focused on the strategic and national challenges facing Israel and its interim government as one might expect in light of his arrogation of all significant powers of government decision making to himself.

Mendelblit’s main focus today is criminalizing Israel’s elected leaders and all but nullifying the authorities and powers of the political system. For instance, last Thursday Mendelblit held a prime-time press briefing where he announced that he intends to indict the prime minister. The law actually bars him from indicting the prime minister, at least for the next several months.

According to Israel’s Immunity Law, before submitting an indictment of a prime minister or member of Knesset to a court, the attorney general must first submit it to the Knesset’s House Committee. The House Committee is charged with deciding whether or not to grant immunity to officeholders pending indictment.

There is currently no House Committee. It cannot be convened until after a government is formed. So under the law, Mendelblit is barred from indicting Netanyahu.

Announcing his intention to indict Netanyahu at a politically sensitive time when he lacks power to do so was not the only way Mendelblit has displayed his lack of concern for the law. In the days that followed his announcement, his office announced that Mendelblit was convening a meeting with his top aides to decide whether or not to fire Netanyahu.

Here too, Mendelblit has no legal authority to fire Netanyahu. According to Israel’s Basic Law: The Government, the only legal authority empowered to remove the prime minister from office is the Supreme Court. And the court can do so only in one circumstance. If a lower court convicts the Prime Minister of crimes and the Supreme Court upholds the conviction, then it can demand that the prime minister resign from office. Mendelblit manifestly has no power or authority to do so.

But when Mendelblit announced Monday that he “decided” to permit Netanyahu to remain in office despite the indictment, (which again, he has not carried out), none of the fawning legal reporters noted that he had no authority to even consider the option of removing him from office. Instead, they presented his “decision” as proof of Mendelblit’s objectivity and fairness.

Less than 24 hours after he – in his infinite forbearance – announced that he was “permitting” Netanyahu to continue to serve as prime minister, news reports began streaming in that he intends to “indict” Health Minister Yakov Litzman and Interior Minister Aryeh Deri shortly. And again, as with Netanyahu, so with Deri and Litzman, so long as there is no House Committee, Mendelblit cannot indict them. But then, the legal limits on his power are not Mendelblit’s concern.

Were Mendelblit limiting his power plays to his bids to criminalize the government and the political system, it would be bad enough. But he’s not. He has also given himself the power to veto strategic decisions.

In the lead up to the election in September for instance, Mendelblit reportedly nixed Netanyahu’s plan to order a military operation in Gaza in retaliation for Hamas’s missile attack on Ashdod.

What were the considerations that informed Mendelblit’s decision? Who empowered him to decide? Was he right or wrong? Did his decision advance or harm Israel’s strategic interests?

There’s no way of knowing. But it is clear enough that with Mendelblit now effectively the only person in Israel with the power to make such decisions, Israel will not take advantage of Iran’s current weakness. And in the meantime, a month into the protests, Mendelblit has kept our leaders in a state of strategic paralysis, Iran has regrouped and Wednesday announced that it will be holding joint wargames with the Chinese and Russian armies.

As expected, politicians on the Left were quick to condemn the protesters at the Tel Aviv Museum of Art. Like the lawyers and the media, the politicians accused them of demonstrating against, “the rule of law,” and endangering Israeli “democracy.”

But the truth is that most of the politicians condemning them were being cynical. They know the protesters are right. They know that the current situation is untenable.

As a senior columnist at Yedioth Ahronoth put it in May 2008, they understand that Israel simply cannot continue to function as an “investigatocracy.”

In his article, “Investigatocracy,” then star columnist and current Blue and White Co-Chairman Yair Lapid noted that four prime ministers in a row – Netanyahu, Ehud Barak, Ariel Sharon, and Ehud Olmert – had been subjected to criminal probes during their tenure in office. He said presciently that it was a foregone conclusion Olmert’s successor would similarly be investigated. To end this state of affairs, Lapid argued that the Knesset needed to pass a law along the lines of standing legislation in France and Italy which bar police from investigating serving prime ministers.

Lapid wrote, “This may perhaps sound a bit undemocratic. But what is happening now is much less democratic. Instead of majority rule, we have rule by criminal complainants.”

What happened to Lapid since then? Why didn’t he introduce that legislation when he entered Knesset in 2013? Why did he instead become Netanyahu’s antagonist? It is Lapid after all who has used Mendelblit’s criminal probes of the premier as a justification for blocking the formation of a unity government between Likud and Blue and White.

And what happened to all the other politicians, like President Reuven Rivlin who once argued passionately for restraining what he referred to as Israel’s “rule of law mafia”?

Today Rivlin is among the legal fraternity’s greatest cheerleaders.

Lapid and Rivlin and their colleagues all know there is only one way to restore the power of Israel’s political system and return the legal fraternity to its proper proportions. The Knesset needs to pass laws to reform the system.

But as the problem grows more acute from year to year, our politicians fail to join forces to restore their powers.

It’s easy to explain their change of heart. Rivlin, Lapid and their colleagues suffer from a combination of cowardice and opportunism. They rightly fear that the prosecutors and police investigators will place them under criminal investigation if they support legal reform bills.

As for opportunism, why would an opposition politician stick his neck out for the prime minister or a government minister? Why would they fight for the prerogatives of their political rivals when those are seized by unelected prosecutors? It’s much safer and politically expedient to condemn their rivals as crooks while clucking sanctimoniously about the moral imperative to stand for the “rule of law.”

So long as our politicians are motivated by cowardice and opportunism, the Israeli public will be powerless to affect either side of the screen.