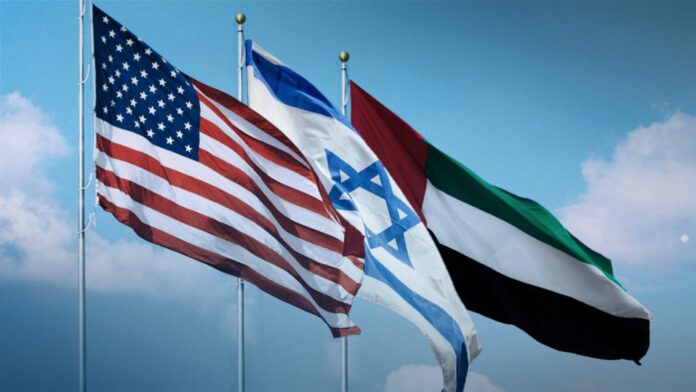 Israel and the United Arab Emirates reached a historic agreement on Thursday to set up full diplomatic relations between the two countries, the third such deal the Jewish state has struck with an Arab country after Egypt and Jordan.

A White House announcement said the leaders of the US, Israel and the UAE “spoke today and agreed to the full normalization of relations between Israel and the United Arab Emirates.”

Israeli and UAE delegations will meet in the coming weeks to sign bilateral agreements regarding investment, tourism, direct flights, security and the establishment of reciprocal embassies, it said.

However the nation’s foreign minister was more direct, acknowledging that “the UAE is employing its decision for normal relations with Israel.”

Anwar Gargash said the country was doing so “With courageous initiative, to preserve the chances of a two-state solution,” and added that the nation “calls for the resumption of negotiations between the Palestinians and Israelis, and is committed to working with friends to establish security and ensure the stability of the region.”

Netanyahu had earlier abruptly left a meeting of the so-called coronavirus cabinet declaring, “You will find out why afterward.”

He was set to give a televised address on the agreement at 8 p.m.

President Reuven Rivlin called the agreement “an important and strategic milestone for new opportunities in our region.”

“I sincerely hope that this step will also lead to strengthening the trust between us and the peoples of the region, which we will need to reach a broad-based and stable agreement amongst us all,” Rivlin tweeted.

Speaking to reporters after the announcement, Trump suggested that more diplomatic breakthroughs between Israel and its Muslim neighbors in the region were expected.

“Things are happening that I can’t talk about,” he said.

US Secretary of State Mike Pompeo described it as “a historic day and a significant step forward for peace in the Middle East.”

“The United States hopes that this brave step will be the first in a series of agreements that ends 72 years of hostilities in the region,” Pompeo said.

The establishment of formal relations with the United Arab Emirates opens the door “for additional agreements,” Foreign Minister Gabi Ashkenazi said in his first reaction to the bombshell announcement.

In a series of tweets, Ashkenazi thanked Trump, Pompeo and Netanyahu for the “historic achievement.” He also welcomed the fact that Netanyahu’s planned unilateral West Bank annexation was suspended, saying he was “committed to [the idea] that the balanced Trump plan, in its entirety, will be discussed extensively later on with the countries of the region.”

Channel 12 news reported that Ashkenazi and Defense Minister Benny Gantz were kept out of the loop by Netanyahu, and only updated on the agreement shorlty before it was announced.

UAE Ambassador to the US Yousef Al Otaiba, who in June addressed Israelis directly in a newspaper op-ed calling for closer ties and against annexation, hailed the agreement as “a significant advance for the region and for diplomacy,” and said it “creates new dynamics and possibilities in the peace process.”

Closer ties “will accelerate growth and innovation, expand opportunities for young people, and breakdown long-held prejudices,” he said. “It will help move the region beyond a troubled legacy of hostility and strife to a more hopeful destiny of peace and prosperity.”

According to the joint statement from Israel, the UAE and the US, Israel has agreed to suspend West Bank annexation plans in exchange for the normalization of ties with the UAE.

“This historic diplomatic breakthrough will advance peace in the Middle East region and is a testament to the bold diplomacy and vision of the three leaders and the courage of the United Arab Emirates and Israel to chart a new path that will unlock the great potential in the region,” the statement said.

“This normalization of relations and peaceful diplomacy will bring together two of America’s most reliable and capable regional partners. Israel and the United Arab Emirates will join with the United States to launch a Strategic Agenda for the Middle East to expand diplomatic, trade, and security cooperation.”

“As a result of this diplomatic breakthrough and at the request of President Trump with the support of the United Arab Emirates, Israel will suspend declaring sovereignty over areas outlined in the President Vision for Peace and focus its efforts now on expanding ties with other countries in the Arab and Muslim World,” the statement added.

At the same time, Israeli officials asserted that the freeze on plans to annex the West Bank was only temporary.

“Israel remains committed to annexing parts of the West Bank,” a senior Israeli official said. “The Trump administration asked to temporarily suspend the announcement [of applying sovereignty] in order to first implement the historic peace agreement with the UAE.”

The UAE, a federation of seven sheikhdoms founded in 1971, has been increasing its engagement with Israel in recent years.

While not acknowledging Israel diplomatically, Emirati officials have allowed Israeli officials to visit and the Israeli national anthem was played after an athlete won gold in an Abu Dhabi judo tournament. Israel also has a small mission representing its interests at the International Renewable Energy Agency in Abu Dhabi.