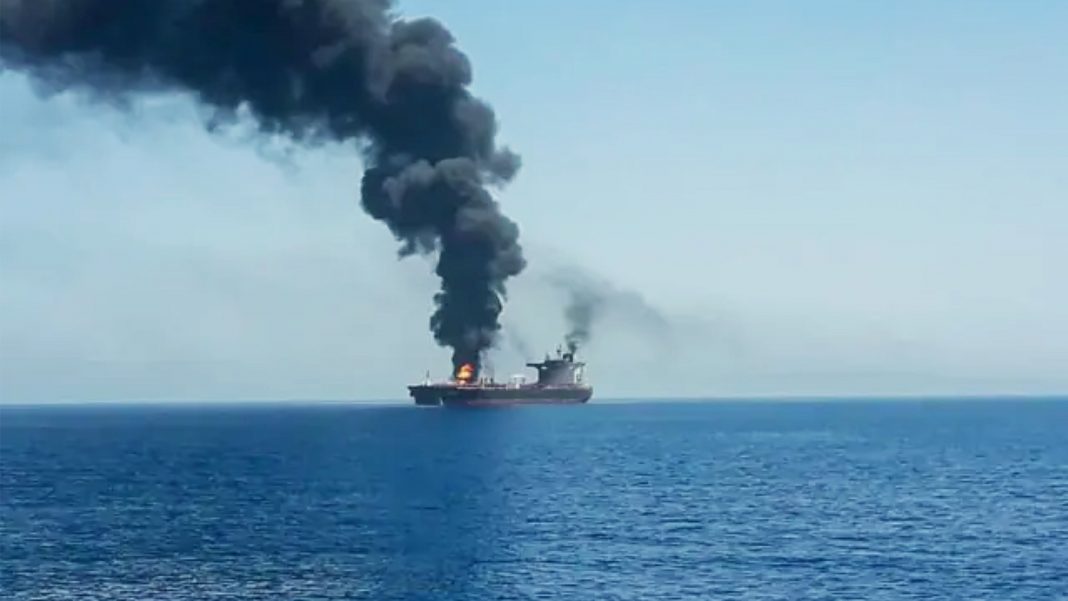 Israel’s defense leadership convened Friday night to discuss what it believes to be an Iranian attack on a ship with Israeli ties that killed two foreign crewmen, as a senior government source accused Tehran of “sowing destruction” and said it was proving itself to be “a global problem.”

Two ship crewmen, a British and Romanian national, died in Thursday night’s attack off the coast of Oman on the oil tanker Mercer Street.

An unnamed US official told The Associated Press it appeared that a so-called “suicide drone” was used in the attack.

A senior Israeli government source said on condition of anonymity Friday evening that “Iran is sowing violence and destruction in every corner of the region. They were so eager to attack an Israeli target that they’ve embroiled themselves and incriminated themselves in the killing of foreign citizens.”

The source said that with a new hardline Iranian president set to be sworn in, “the masks are coming off and no one can pretend they don’t know the character of the Iranian regime.

“Iran isn’t just Israel’s problem, it is a global problem, and its behavior endangers free global shipping and trade. Our campaign against them will continue.”

In a statement Friday night, Foreign Minister Yair Lapid said he was in continuous contact with his British counterpart Dominic Raab and had “noted to him the need to respond severely to the attack.”

“Iran is not just an Israeli problem, but an exporter of terror, destruction and instability that hurt us all,” he said. “The world must not be silent in the face of Iranian terror.”

In the wake of the attack, Defense Minister Benny Gantz called an urgent discussion with IDF Chief of Staff Aviv Kohavi and other defense officials on Friday.

An Israeli official cited by the Ynet news site hinted at possible retaliation, saying it would be difficult for Israel to ignore the latest attack.

Walla news cited an Israeli official saying, “The only question is how and when we’ll respond.”

Analysts said the attack bore all the hallmarks of tit-for-tat exchanges in the shadow war between Israel and Iran, in which vessels linked to each nation have been targeted in waters around the Gulf.

The assault represented the worst-known maritime violence so far in regional attacks on shipping since 2019. The US, Israel and others have blamed the attacks on Iran amid the unraveling of Tehran’s nuclear deal with world powers.

An unnamed senior Israeli official cited by Channels 12 and 13 news said the Romanian fatality was apparently the captain, while the British man was a security guard.

Zodiac Maritime is a London-based company belonging to Israeli tycoon Eyal Ofer. Earlier this month, a UAE-bound vessel previously owned by Ofer’s company was struck in the northern Indian Ocean.

The company said that while it operates the Liberia-flagged “Mercer Street” oil tanker, the owner of the ship is Japanese.

It added on Friday it was not aware of any other injuries apart from the two crewmen who died.

“Our primary concern remains the safety and well-being of everyone on board and all those affected by the situation. Details of the incident are still being established and an investigation into the incident is currently underway,” the company added.

It later said the ship was “sailing under the control of her crew and under her own power… to a safe location with a US naval escort.”

A brief initial statement earlier from the British military’s United Kingdom Maritime Trade Operations said an investigation was underway into the attack, which it described as happening late Thursday night just northeast of the Omani island of Masirah. The location is over 300 kilometers (185 miles) southeast of Oman’s capital, Muscat.

Meir Javedanfar, an expert on Iranian diplomacy and security at Israel’s IDC Herzliya university, told AFP the attack was “most probably Iran.”

Javedanfar said Iranians “feel badly disadvantaged when it comes to responding to attacks inside Iran which have been associated to Israel,” including an April strike on the Natanz uranium enrichment site reportedly executed by Israel.

An attack on a maritime vessel “is one area where [Iranians] feel they can try to at least retaliate,” he added.

But he assessed the fundamental dynamics of the rivalry would change little. “Both sides will continue what they’re doing,” he said.

In recent months, Israel and Iran have accused each other of attacking a number of merchant ships, damaging them with explosives. The vessels in each case were only lightly damaged and there were no injuries in the incidents.

These things will be greatly increased and primarily take place during the seven-year Tribulation (from which the church is absent). However, with the current global state of turmoil amongst the nations, we can’t help but recognize the distress of nations Jesus describes in Luke 21 and Matthew 24, rising in our world today.