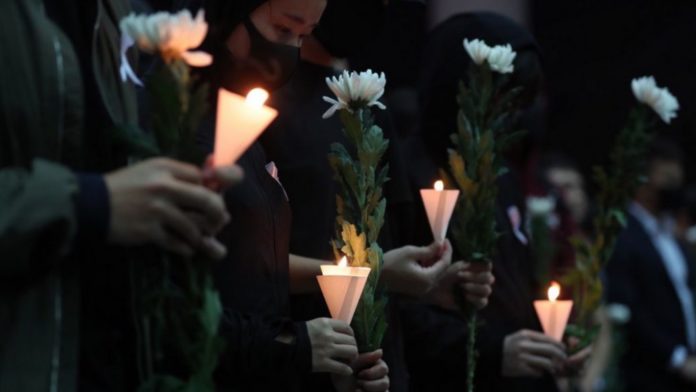 The massive event also followed arrests of at least seven pro-democracy lawmakers, facing up to a year in jail.

Tens of thousands in Hong Kong attended Saturday a vigil for Alex Chow, a 22-year-old student who died in hospital due to head injuries sustained in a fall during a prior clash between the police and protesters.

Chow was hospitalized last weekend after the police moved to disperse the protesters in a car park.

Although the precise chain of events leading to his fall is unclear and disputed, protesters have made alleged police brutality one of their movement’s rallying cries and have seized on the death.

Saturday’s huge rally, one of the few in recent months to obtain police approval, saw black-clad people, many of them donning banned face masks, call for “revenge”.

It followed the arrests of at least seven pro-democracy lawmakers, now facing up to a year in prison.

The charges relate to chaotic scenes that broke out within a legislative committee in May as pro-democracy lawmakers tried to stop a controversial bill being discussed that would allow extraditions to mainland China.

The bill in question was the trigger for the ongoing protests and has now been officially withdrawn.

The protest movement, however, shows no signs of abating, with the protesters’ demands list growing to include political reforms and third-party investigation of police brutality.