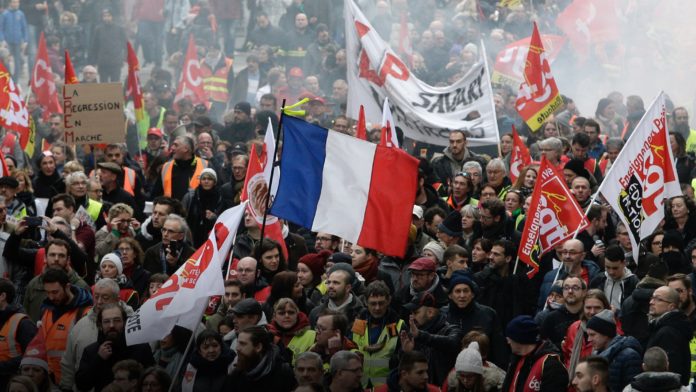 Strikes in France continue on Wednesday with heightened rhetoric on both sides and the possibility of more power cuts, as well as severe transport disruption.

As the mass transportation strikes in France approach the three-week mark there has been a hardening of rhetoric from both sides as the possibility of declaring a ‘Christmas truce’ slipped away on Tuesday.

Tuesday marked another day of marches and mass protests, with striking workers admitting that they are feeling the pinch financially but determined to keep going.

On Tuesday its was announced that there will be no ‘Christmas truce’ on the railways over December 21st and 22nd, badly hitting the traditional holiday getaway weekend.

So what’s happening on Wednesday?

Well on the railways there will be another day of disruption with around 80 percent services cancelled.

There will be one in three high speed TGV services running, a quarter of Intercité services, about one in six Intercité services and the worst affected party of the network continues to be local TER trains, where only three services in 10 will be running, many of those replacement bus services.

In Paris public transport will again be badly hit with many Metro lines closed altogether and others, along with tram, bus and RER lines, offering a limited service.

On the trams, lines 5 and 8 will be running a normal service.

Services on the RER remain rush hour only and about half the normal bus routes are running.

In the air, there were no flight cancellations, but there could be knock-on effects after some flights in and out of Paris’ Orly airport were cancelled on Tuesday. Anyone who has a flight booked is advised to check with their airline.

And in a new development there is the possibility of more power cuts.

Around 50,000 homes in the Bordeaux area lost power on Monday night and another 40,000 in Lyon on Tuesday morning.

The hardline CGT union has confirmed that its members were behind the cuts, and says there could be more to come.

Francis Casanova, CGT central union delegate at electricity supplier RTE, said: “We consider that this is not malicious. “

This is a way for RTE employees to show that if there is electricity in this country, it is because they are at work every day.”

But the unions were not the only ones talking tough on Tuesday, Prime Minister Edouard Philippe told the French parliament that he would be pressing ahead with the pension reform regardless of the protests.

He said: “My determination, and that of the government and the majority, is total.”