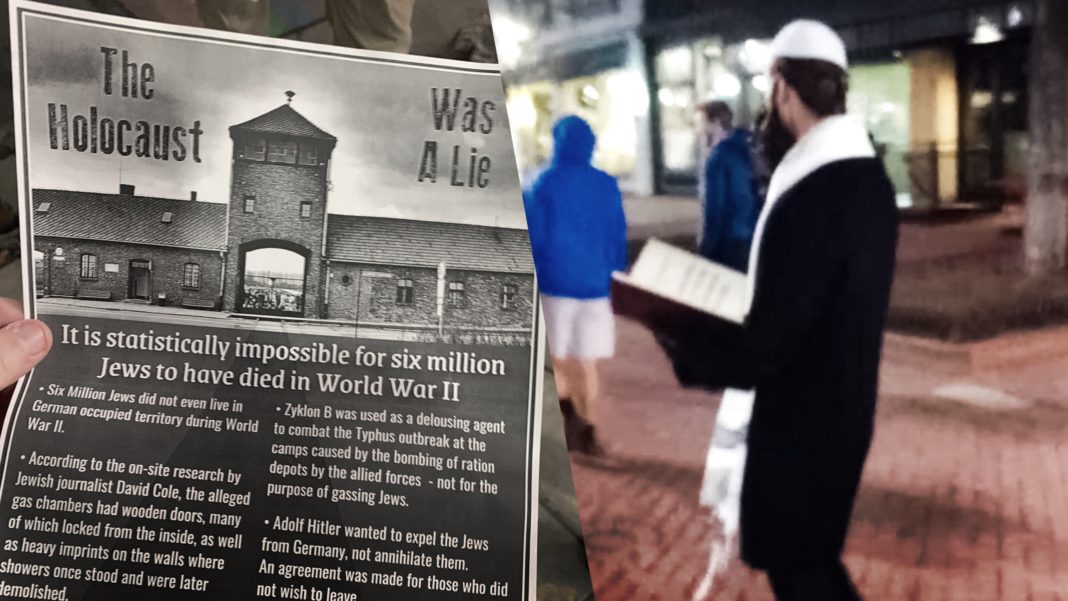 A group of men wearing long tallitot (prayer shawls) and white kippot (skullcaps) handed out flyers in a pedestrian mall in Boulder, Colorado on Saturday night. Though the men appeared Jewish, their message was full of hatred and the fliers claimed that the Holocaust could not have happened, citing facts purporting the murder of six million Jews was “impossible”.

Some of the fliers blamed the Jews for the 9-11 Islamist attacks, the Atlantic slave trade, and the pornography industry. “Academia is dominated by Marxist Jews,” one poster read.

The group reportedly live-streamed their activities.

The Daily Camera, a local news service, reported that no complaints were filed with the police and the anti-semitic activities were permitted to continue.

In a perplexing twist, one group, the Colorado Springs Anti-Fascists, claimed in a tweet that their Boulder “comrades” chased off the Holocaust Deniers. They identified the offenders as a neo-Nazi group named They Goyim Defense League (GDL). The name is a twisted play on words since Goyim (Hebrew for ‘nations’) is how Jews refer to non-Jews and the acronym is a play on the Jewish Defense League (JDL), a far-right organization whose stated goal is to protect Jews from antisemitism.

GDL’s Twitter page describes the group’s mission as “To stop the defamation of the European peoples, and to secure justice and fair treatment to all.” Though claiming to “fight anti-white hatred”, at least one post on their twitter feed is horribly anti-Semitic, blaming 60-100 million dead from the Russian revolution on the Jews while another tweet bemoans “Jewish Supremacy.”

Buzz Feed News reported that The group is apparently run by two YouTubers who go by “Handsome Truth” and “Sway Guevara.” The group’s deceptive tactics and hidden racism has fooled several celebrities, using an app called Cameo in which celebrities make a short scripted video for pay. GDL duped several celebrities into participating in videos with coded anti-Semitic statements.

In one such video, former Green Bay Packers quarterback Brett Favre made a video for GDL in which he said, “Don’t let the small get you down. Keep fighting, too, and don’t ever forget the USS Liberty and the men and women who died on that day. God bless and take care.”

‘Small’ is slang for ‘small hats’ or Jewish head coverings. The USS Liberty incident was an attack on a United States Navy technical research ship by Israeli Air Force jet fighter aircraft during the 1967 Six-Day War. Though both the U.S. and Israeli governments have labeled the incident as a case of mistaken identity, it has become a dog-whistly rallying cry for haters of Israel.

Favre told BuzzFeed News that he thought he was making a video “to support the brave men and women of our military forces.” Favre apologized for the video, donating the money to charity.

Buzz Feed reported that GDL is closely associated with white supremacist and failed California Senate candidate Patrick Little. Little was profiled by the Anti-Defamation League for “spreading anti-Semitic hate” around the country.