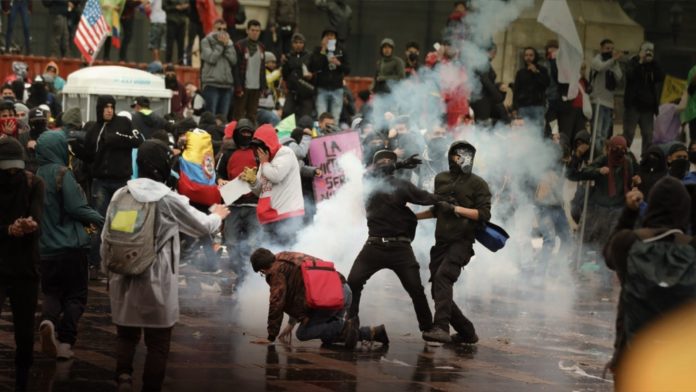 Groups of demonstrators were dispersed by tear gas on Saturday during a third day of protests in Colombia and videos on social media showed at least one gravely injured protester.

The demonstrations followed an overnight curfew and isolated looting in the capital Bogota.

More than 250,000 people marched in a national strike on Thursday to express growing discontent with President Ivan Duque’s government, while thousands gathered on Friday for dozens of “cacerolazo” demonstrations – a traditional Latin American protest in which people bang pots and pans.

Three people were killed following Thursday’s protests in connection with alleged looting, which is under investigation by authorities.

Demonstrators’ grievances range from anger at economic plans the government denies supporting to what protesters say is a lack of action to stop corruption and the murder of human rights activists, among other issues.

“I’m against the repression, abuse, aggression and mistreatment that the government is committing,” said pensioner Claudia Rojas, 55, as she gathered at a cacerolazo in Bogota’s Hippie Park among a mostly young crowd while a helicopter circled overhead. “More than anything I’m against the labor, pension and health reforms the government wants.”

The hundreds of demonstrators later sang the national anthem.

Earlier on Saturday hundreds of protesters were dispersed with tear gas from a main roadway near Bogota’s National Park.

Videos posted on social media showed medics performing CPR on one protester, as they kneeled near what appeared to be blood.

Demonstrators also gathered outside of congress in Bolivar Plaza, near the presidential palace. Though vocal, the crowds appeared smaller than previous protests, according to a Reuters witness.

All of Bogota was under curfew from 9 p.m. on Friday through 5 a.m. on Saturday.

Bogota Mayor Enrique Penalosa said that looting and what officials said were false reports of residential break-ins overnight may have been coordinated by criminals.

“We need to be prepared for a long effort, I invite you to have patience, to have resilience because hard and difficult days are coming,” Penalosa said in a joint news conference with Duque and security officials.

“This isn’t about some young people who are having spontaneous demonstrations, there is a plot here, high-level organization, some politickers interested in destabilizing the country,” he added.

Duque’s administration has been plagued by problems during his 15 months in office, including a combative congress, low approval ratings and unsuccessful legislative efforts.

The protests have coincided with demonstrations elsewhere in Latin America, from anti-austerity marches in Chile, to protests over vote-tampering allegations in Bolivia that led President Evo Morales to resign, and inflamed tensions in Ecuador and crisis-hit Nicaragua.

Three police officers were killed in a bomb blast late on Friday at a police station in the southwestern province of Cauca, known as a hot spot for drug trafficking and violence.