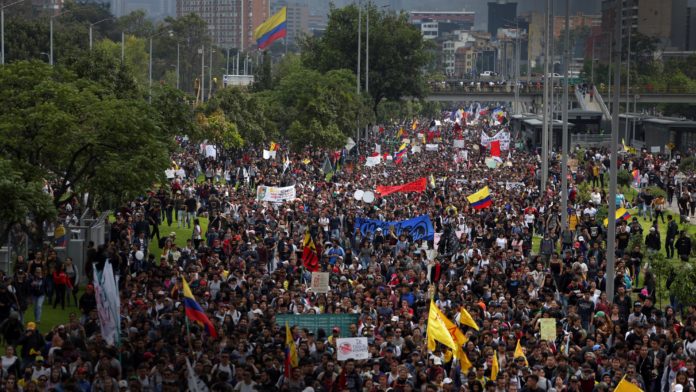 Colombia’s government has announced plans to close its borders, part of a string of measures to contain mass strikes and protests planned this week amid sweeping unrest in South America.

Tens of thousands are expected to join protests on Thursday against the rightwing government of Iván Duque, whose popularity has dwindled steadily since he took office in August last year.

The marches, announced weeks ago following proposed austerity measures, come amid a wave of political turmoil across the region: Chile has seen more than a month of anti-government protests, which last week led its political parties to agree to a referendum on replacing the country’s dictatorship-era constitution; Bolivia is still reeling from the military-backed ousting of the president, Evo Morales.

Colombia’s neighbours are also mired in political turbulence: Ecuador’s president, Lenín Moreno, was forced to backtrack on austerity measures by a wave of popular protest, while Venezuela is still mired in economic collapse and political violence.

Duque’s government is clearly nervous. On Monday, his government authorized a number of riot-control measures ahead, allowing local authorities to impose curfews and ban the sale of alcohol. Colombia’s borders will also be closed until Friday morning, it was later announced.

In the capital, Bogotá, squadrons of riot police could be seen outside a number of universities. Many businesses will close while schools have instructed staff and students to stay home.

On Tuesday, police searched 27 homes of people thought to be involved in the protests.

“The government is worried because the people and organizations who have come out in support of the protest are more heterogeneous than they are used to,” said Sergio Guzmán, the director of Colombia Risk Analysis. “It’s not only the labour unions, or the students, or indigenous people; it’s all of them.”

The protests were called in response to a range of issues and follow a spate of occasionally violent student demonstrations in September.

Some marchers will be protesting against the government’s perceived slow-walking of a peace deal with leftist rebel group the Revolutionary Armed Forces of Colombia (or Farc). Others are incensed by the routine murders of indigenous leaders and local activists. And others are unimpressed with government malaise and corruption.Advertisement

Nancy Patricia Gutiérrez, the interior minister, told journalists on Monday that some of the motives for the strike were “false”, and on Monday the presidency tweeted a video contrasting footage of smiling and hardworking Colombians with masked rioters. “Let’s not allow a call to destroy what we have built go against who we are as Colombians,” the tweet read. Meanwhile, Bogotá’s police tweeted a Hollywood-style video showing riot police firing teargas towards protesters.

After decades of civil conflict, Colombia has recently been among the more stable countries in Latin America. Protests often fail to attract large numbers, which activists attribute to a fear of being demonized as hardline leftists or rebel sympathizers. That stigma looks to be lifting ahead of Thursday.