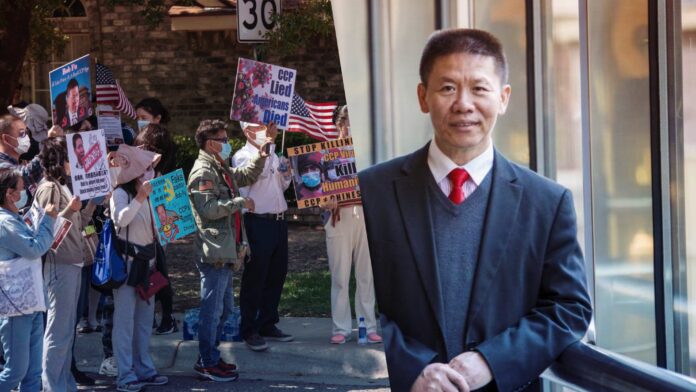 Pastor Bob Fu, founder of the faith-based advocacy group ChinaAid, and his family are in a protected location while the FBI and CIA investigate threats against his life from suspected members of the Chinese Communist Party.

The threats against Fu and his loved ones began Sept. 26, according to Patrick Payton, mayor of Midland, Texas. The mayor shared the information as protesters descended on Fu’s home, accusing him of being a spy for the CCP.

Payton said the Fus have since been relocated as the FBI and CIA are “heavily involved” in an investigation into the situation.

The protesters gathered at the pastor’s home argued he is a spy for the CCP, gathering information against Americans to provide to the Chinese government, according to the Midland Reporter-Telegram.

“It’s something we can’t come to grips with, why someone in this organization is saying he’s a member of the Communist Party, when quite frankly, all he’s done is been wanted by the Communist Party,” Payton said. “We’re still trying to figure that out.”

And according to ChinaAid, an alleged CCP operative is urging supporters to “eliminate” Fu.

Currently, in mainland China, Christians are facing intense persecution for their faith, as it cannot be practiced freely or outside government control.

Fu’s nonprofit ChinaAid provides legal assistance to Christians who have been wrongly arrested in China.

Breitbart reported in further detail on the threats against Pastor Fu and the protests outside his home:

Fu is the founder of China Aid, a nonprofit that offers support to persecuted Chinese Christians and raises awareness regarding specific acts by the Communist Party to erase Christianity from the country. Estimates suggest China is home to as many as 97 million Christians, more than the number of formal members of the Communist Party.

Fu and his wife are former political prisoners, imprisoned in 1996 for openly practicing Christianity (“illegal evangelism”); Fu personally participated in the June 1989 Tiananmen Square protests. The pastor commonly attends events in favor of religious freedom in China and has not been the focus of any significant controversy in his career as an activist.

According to the Midland Reporter-Telegram, Fu’s hometown newspaper, an independent translation of several Guo GTV videos show that he has openly called for his followers to kill Fu. Guo Wengui [who has been threatening Pastor Fu] reportedly called for a “global kill cheaters campaign” to kill people like Fu, who he claimed was a communist.

“We will fully support our comrades who take actions to kill those cheaters,” Guo said.

Some appear to have responded to Guo’s call. A mob of Guo fans appeared in front of Fu’s home in late September. In a statement, China Aid explained the situation:

“China Aid Association acknowledges and denounces the accusations and calls for violence against President and Founder, Pastor Bob Fu. On September 26, 2020, protesters arrived outside of Fu’s house. He was out of town, but his wife and children were home,” the statement read. “Since then, the number of protestors has continued to increase as well as the calls for violence. On Monday, October 5, it escalated when a bus of over 50 protesters showed up outside his home.”

“I pray God uses this threat to expose the Chinese Communist’s agenda to destroy Christianity. Americans in general and Christians specifically need to know what is really happening in China and now even here in the USA. Please pray for me and my family,” Fu said in a statement regarding the incident.