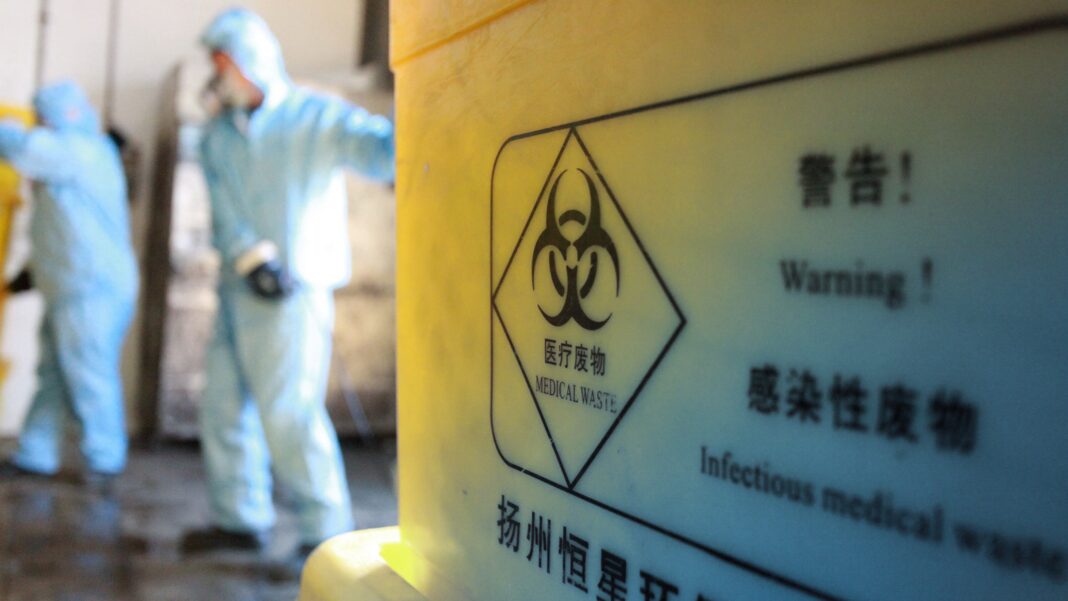 In 2015, Chinese military scientists discussed how to weaponze SARS coronaviruses, five years before the COVID-19 pandemic emerged in Wuhan, China – where CCP scientists were collaborating with a US-funded NGO on so-called ‘gain of function’ research to make bat coronaviruses infect humans more easily.

In a 263-page document, written by People’s Liberation Army scientists and senior Chinese public health officials and obtained by the US State Department during its investigation into the origins of COVID-19, PLA scientists note how a sudden surge of patients requiring hospitalization during a bioweapon attack “could cause the enemy’s medical system to collapse,” according to The Weekend Australian (a subsidiary of News Corp).

It suggests that SARS coronaviruses could herald a “new era of genetic weapons,” and noted that they can be “artificially manipulated into an emerging human ­disease virus, then weaponized and unleashed in a way never seen before.”

The chairmen of the British and Australian foreign affairs and intelligence committees, Tom ­Tugendhat and James Paterson, say the document raises major concerns about China’s lack of transparency over the origins of COVID-19.

The Chinese-language paper, titled The Unnatural Origin of SARS and New Species of Man-Made Viruses as Genetic Bioweapons, outlines China’s progress in the research field of biowarfare.

“Following developments in other scientific fields, there have been major advances in the delivery of biological agents,” it states.

“For example, the new-found ability to freeze-dry micro-organisms has made it possible to store biological agents and aerosolise them during attacks.”

Ten of the authors are scientists and weapons experts affiliated with the Air Force Medical ­University in Xi’an, ranked “very high-risk” for its level of defence research, including its work on medical and psychological sciences, according to the Australian Strategic Policy Institute’s ­Defence Universities Tracker.

The Air Force Medical University, also known as the Fourth Medical University, was placed under the command of the PLA under President Xi Jinping’s military reforms in 2017. The editor-in-chief of the paper, Xu Dezhong, reported to the top leadership of the Chinese Military Commission and Ministry of Health during the SARS epidemic of 2003, briefing them 24 times and preparing three reports, according to his online ­biography. -The Australian

“We were able to verify its ­authenticity as a document authored by the particular PLA ­researchers and scientists,” according to Robert Potter, a digital forensics specialist who has worked for the US, Australian and Canadian governments – and has previously analyzed leaked Chinese government documents, according to the report. “We were able to locate its genesis on the Chinese internet.”

Former US Secretary of State Mike Pompeo and his chief China adviser, Miles Yu, referenced the document in a February op-ed in the Wall Street Journal, writing that “A 2015 PLA study treated the 2003 SARS coronavirus outbreak as a ‘contemporary genetic weapon’ launched by foreign forces.”

And according to Peter Jennings, executive director of the Australian Strategic Policy Institute, “There is no clear distinction for research capability because whether it’s used offensively or defensively is not a decision these scientists would take,” adding “If you are building skills ostensibly to protect your military from a biological attack, you’re at the same time giving your military a capacity to use these weapons ­offensively. You can’t separate the two.”

The study also examines the optimum conditions under which to release a bioweapon. “Bioweapon attacks are best conducted during dawn, dusk, night or cloudy weather because intense sunlight can damage the pathogens,” it states. “Biological agents should be released during dry weather. Rain or snow can cause the aerosol particles to precipitate.

“A stable wind direction is ­desirable so that the aerosol can float into the target area.”

Among the most bizarre claims by the military scientists is their theory that SARS-CoV-1, the virus that caused the SARS epidemic of 2003, was a man-made bioweapon, deliberately unleashed on China by “terrorists”. -The Australian

News of the document follows a May 3 report that the Wuhan Institute of Virology was working with the Chinese government in a team which comprised five military and civil experts, “who conducted research at WIV labs, military labs, and other civil labs leading to “the discovery of animal pathogens [biological agents that causes disease] in wild animals,” according to the Epoch Times.

And as we noted in March, the US National Institutes of Health (NIH) – headed by Dr. Anthony Fauci, “had funded a number of projects that involved WIV scientists, including much of the Wuhan lab’s work with bat coronaviruses.”

In 2017, Fauci’s agency resumed funding a controversial grant to genetically modify bat coronaviruses in Wuhan, China without the approval of a government oversight body, according to the Daily Caller. For context, in 2014, the Obama administration temporarily suspended federal funding for gain-of-function research on bat coronaviruses. Four months prior to that decision, the NIH effectively shifted this research to the Wuhan Institute of Virology (WIV) via a grant to nonprofit group EcoHealth Alliance, headed by Peter Daszak.

The NIH’s first $666,442 installment of EcoHealth’s $3.7 million grant was paid in June 2014, with similar annual payments through May 2019 under the “Understanding The Risk Of Bat Coronavirus Emergence” project.

Notably, the WIV “had openly participated in gain-of-function research in partnership with U.S. universities and institutions” for years under the leadership of Dr. Shi ‘Batwoman’ Zhengli, according to the Washington Post‘s Josh Rogin.

So now we have a 2015 document from the Chinese military describing using COVID as a bioweapon – four years before the COVID-19 pandemic breaks out just miles away from a Chinese lab working to make bat COVID more transmissible to humans, and you’re a conspiracy theorist peddling ‘debunked lies’ if you think they might be related.

And for those who say ‘COVID-19 couldn’t be man-made because a laboratory-created virus would have tell-tale signs of manipulation’ – au contraire. As Nicholas Wade noted three days ago in the Bulletin of the Atomic Scientists, “newer methods, called “no-see-um” or “seamless” approaches, leave no defining marks. Nor do other methods for manipulating viruses such as serial passage, the repeated transfer of viruses from one culture of cells to another. If a virus has been manipulated, whether with a seamless method or by serial passage, there is no way of knowing that this is the case. “

It’s as if the painfully obvious answer was right in front of us, only to be shrouded in propaganda by China-friendly politicians, big tech, and news outlets running cover for what should be the easiest game of connect-the-dots on the planet. Luckily, what was taboo as recently as a year ago will soon be exposed for the world to see, thanks to The Bulletin Of Atomic Scientists which earlier this week dared to open The Wuhan Virus “Pandora’s Box“…

Jesus’s response is a detailed description of the condition of the world and what it will look like in the last days. Wars and rumours of wars, nation rising against nation, pestilences, Lawlessness, these being the beginning of sorrows. He depicts persecution and an abounding iniquity that would cause the love of many to wax cold and divisions that would cause loved ones to betray one another.