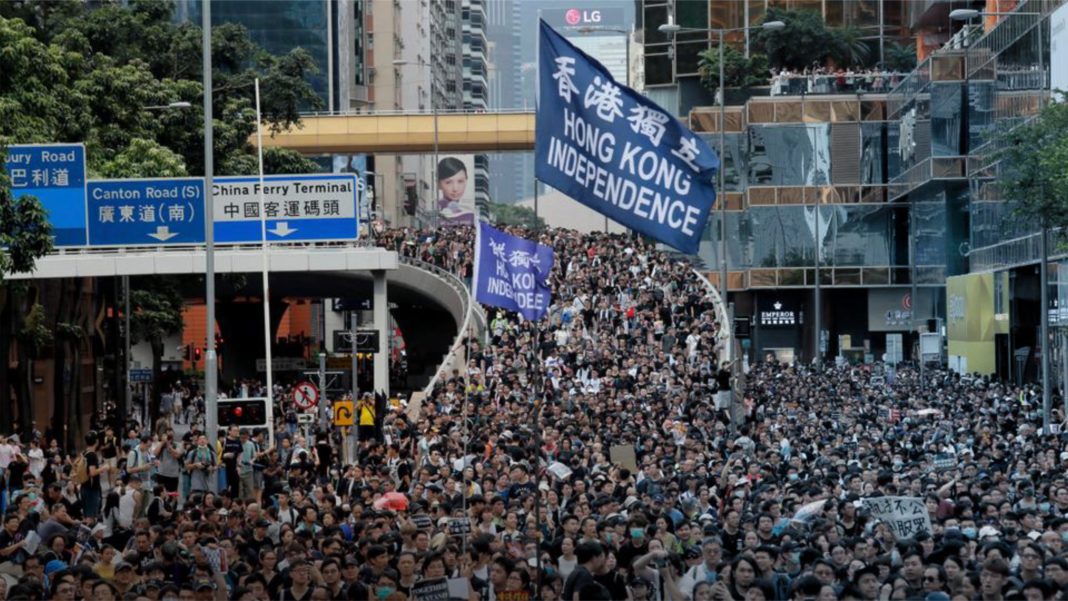 A senior Chinese official dismissed the Hong Kong pro-democracy movement, which has attracted millions of protesters in the past year, as supporters of “terrorism” who had “gone too far” in remarks on Monday.

The official, Deputy Director of the Hong Kong and Macao Affairs Office Zhang Xiaoming, described the widely derided Chinese “national security” law passed last month to criminalize dissent in Hong Kong as equivalent to “anti-virus software” and necessary to silence protesters who do not believe it is possible for Hong Kong to remain a free society so long as it is tethered to the Chinese Communist Party.

The “national security” law allows Chinese government agents to imprison and persecute individuals for, among other crimes, attempting to “subvert state power,” “secessionism,” and anything Beijing interprets as undermining its sovereignty over Hong Kong. Under the “One Country, Two Systems” policy in place in Hong Kong, China is not legally allowed to impose communist laws; protesters consider the “national security” law an illegitimate overreach.

China claims the law was necessary because Hong Kong’s legislature failed to pass laws that would prevent residents from protesting.

“The central Government’s action at this time is an inevitable decision made under the constraints of realpolitik,” Zhang said in remarks on Monday. The law’s passage in Beijing’s National People’s Congress (NPC) was “based on the fact that the actions of internal and external enemies of Hong Kong have caused prolonged chaos there, and endangered national security.”

The protesters, he added, were “showing obvious signs of terrorism.”

Zhang insisted that, rather than silencing Hongkongers, the law would give them the ability to “be free from the fear of violence. They can ride the train and go shopping freely. They can speak the truth on the street without the fear of being beaten up.”

The Communist Party has insisted throughout the past year that Hong Kong protesters have allegedly attacked pro-China agitators. In one instance, police arrested dissidents for allegedly setting a China sympathizer on fire.

The law would function “like installing anti-virus software into Hong Kong,” Zhang claimed, and it would affect “an extremely small number of people,” mostly those who believe Hong Kong should be independent of China.

The protesters, Zhang continued, “have mistaken the restraint and the tolerance shown by the central and the SAR government as weakness. They have gone too far.”

“The opposition camp … wants to turn Hong Kong into an independent or semi-independent political entity, a bridgehead for the external powers to oppose China and the Chinese Communist Party and a chesspiece which external powers can use to contain China,” he claimed.

Hong Kong residents began taking their streets a year ago on Tuesday against a proposed law in their own lawmaking body, the Hong Kong Legislative Council (LegCo), which would have allowed China to extradite anyone present in Hong Kong for violating Communist Party laws, a violation of “One Country, Two Systems.” In addition to opposing the extradition bill, protesters called for freedom for political prisoners, an end to calling their peaceful protests “riots,” an independent investigation into police brutality, and universal suffrage – the ability to elect all lawmakers.

Hong Kong Chief Executive Carrie Lam requested pro-China lawmakers withdraw the bill in LegCo, leading to the NPC passing its own law in Beijing, which essentially results in giving the Communist Party the same sweeping powers that the LegCo bill would have. In addition, LegCo passed a law this month making it illegal to “disrespect” the Chinese communist anthem, the “March of the Volunteers,” which opponents say is a violation of freedom of expression guarantees.

The protesters have continued to issue the four remaining demands from the launch of the protest movement to this day.

Some of Hong Kong’s most prominent pro-democracy leaders have testified to being followed by individuals they believe to be Chinese agents, based on their out-of-town accents and bizarre behavior. Joshua Wong of the pro-democracy Demosisto group revealed on Twitter this week that a “suspicious middle-aged man in a private car” had begun trailing him throughout the past week and photographing him and that other Demosisto members had had similar experiences. Several pro-democracy lawyers also documented run-ins with bizarre individuals speaking in “mainland Chinese” accents following and intimidating them.

The Global Times, a Chinese state propaganda outlet, celebrated the chilling effect that the “national security” law had allegedly begun to have on some of Hong Kong’s most vulnerable dissidents, citing Martin Lee, the 81-year-old founder of Hong Kong’s Democratic Party, as an example. Police arrested Lee in April, along with several other pro-democracy seniors, for their participation in protests. The Times claimed Lee was “softening his tone” by expressing opposition to independence from China. In reality, the interview with Lee that the Times cited included intense expressions of concern about the end of freedom of expression and respect for human rights in the city.

Leaked Emails show UN officials give names of Chinese dissidents to the communist regime before they are set to testify against CCP’s abuses.
Read more
Asia

Lawmakers write that NIH & Pentagon are responsible for “secretively” funneling tax dollars to the Wuhan lab through a US-based nonprofit.
Read more
Asia