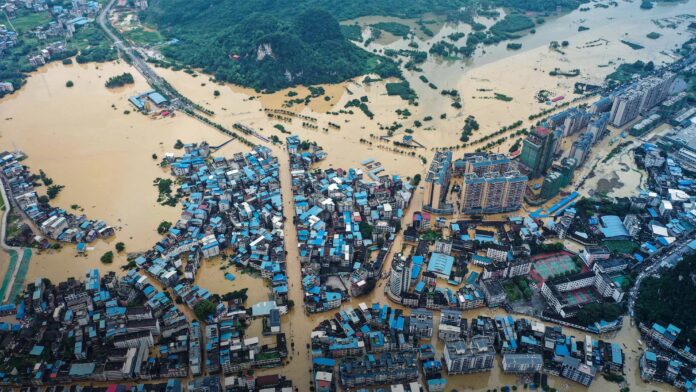 Days of torrential rainfall and expectations for further flooding led China to raise its flood alert level on one river to the second-highest level on Sunday as a dam was blasted to release surging waters.

The Huaihe River Commission of China’s Ministry of Water Resources said the Huai River’s ten reservoirs have seen water levels exceeding flood levels by as much as 22 feet, prompting the rise in alert level.

While the Huai River region is now under a Level 3 alert, areas along the Yangtze River have declared the highest flood alerts.

“Floods are occurring at the same time at the Yangtze River, Huai River and Tai Lake …The flood prevention situation is very severe,” the water resources ministry told Reuters.

In central China, state broadcaster CCTV reported the dam on the Chuhe River in Anhui province was destroyed with explosives early Sunday morning in order to release the floodwaters behind it.

After the blast, the water level was expected to drop by more than 2 feet.

Blasting dams and embankments to discharge water was an extreme response employed during China’s worst floods in recent years, including in 1998 when more than 2,000 people died and almost 3 million homes were destroyed.

Water levels on many rivers, including the mighty Yangtze, have been unusually high this year because of torrential rains.

Last week, the controversial Three Gorges Dam on the Yangtze opened three floodgates as the water level behind the massive dam rose more than 50 feet above flood level.

Another flood crest is expected to arrive at the dam on Tuesday.

Since last month, at least 141 people have died and around 28,000 homes have been damaged in the Yangtze River region, affecting virtually all of mainland China.

The summer rainy season in China brings floods across the country every year, particularly in the central and southern regions. This year, however, the impacts have been especially severe in recent weeks.

About 1.8 million people have been evacuated and direct losses attributed to flooding are estimated at more than $7 billion, according to the Ministry of Emergency Management.

Another 23 people have died or are missing in flooding and landslides since Thursday, bringing the death total to more than 150.

Major cities have been spared so far, but concern has risen over Wuhan and other downstream metropolises that are home to tens of millions of people.

There are also concerns the downpours this year could disrupt the global supply chain that’s needed to tackle the coronavirus pandemic, including the production of personal protective equipment (PPE), according to Reuters.