‘This Is a Gov’t That Supports Terrorism!’ Likud MK Shouts As Bill Stripping Terrorists Of Citizenship Fails 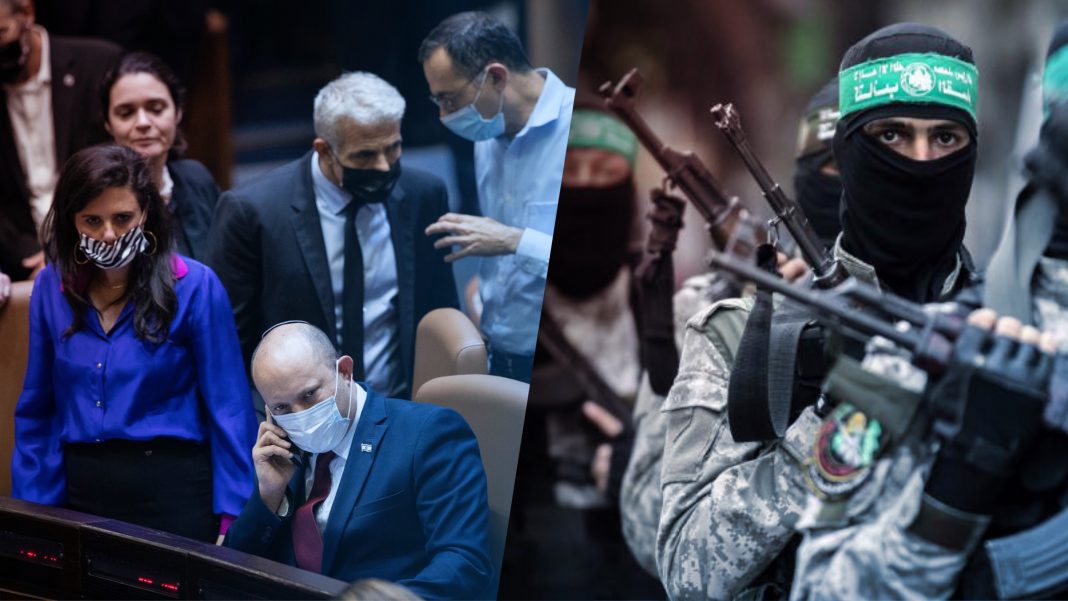 The Knesset voted against the bill that sought to deny residency and citizenship to terrorists Wednesday. The proposal was initiated by MK Avi Dichter and is also signed by MKs from the Yamina and New Hope parties.

During the vote, MK David Bitan of the Likud shouted at coalition members: “This is a government that supports terrorism!”

The opposition claimed that Interior Minister Ayelet Shaked had violated an earlier agreement with MKs Avi Dichter and Orit Struck to postpone the law revoking citizenship for terrorists for two weeks so that a full discussion of the matter could be held.

The law submitted and promoted by MKs Dichter and Struck was formulated with the bereaved families forum “Choosing Life.”

Opposition parties claimed that “the law failed despite the fact that in the Knesset plenum, Minister Shaked declared that it was a proper law and that she supported in principle the law denying citizenship to terrorists of Dichter and Struck, which she even signed before being appointed minister.”

The chairperson of the Religious Zionism faction, MK Orit Struck, said after the vote, “I am sorry that the interior minister, who signed this law herself, and understands that it must be promoted, because any other decision means giving the terrorists the other cheek – backed out at the last minute.”

“We agreed to give the government a short-term opportunity, to advance the issue through dialogue with us. But we could not agree to postpone the vote without a deadline, so it was agreed in advance in our contacts. Unfortunately, our law fell at the hands of coalition members because they are enslaved to the Islamist Party. If the government, which today rejected our outstretched hand, spat in the faces of the bereaved families, decides that it is really interested in promoting a similar law – it has the option to do so,” Struck added.

MK Avi Dichter said: “‘Whoever pays the terrorist’s salary, he will also grant him citizenship. If the ministerial committee that discussed the law on Sunday had decided to discuss my bill in two weeks, I would have accepted and said this is understandable. After postponing the discussion for four months, we decided to bring the law to a plenary vote today.”

“Contrary to those who think that this vote is similar to an extension of a one-year directive (Citizenship Law), it is important to emphasize that it was changed to a motion of confidence in the government at the last minute and therefore the opposition voted against it. The government has proved today that it is a captive of the Arab parties and that we will have to deal with it (as a government that has been captured). We will not give up. This law will pass,” Dichter said.

The ‘Choosing Life’ forum stated: “All along we have warned that joining together with Ra’am is a danger to Israel’s security and today it has been proven. We do not have many words to say to the Knesset members who promised us and signed the law for us, except that they should be ashamed.”

Back in June, following the swearing-in of the new government in Israel, Likud wrote in its no-confidence motion, stating that, “the government was formed with lies and tricking the public, and has no mandate from the public.”

The Likud motion also expressed its condemnation, stating that “For the first time in the history of Israel, a government was founded that sees Judaism as an obstacle, as superfluous and redundant weight that needs to be removed.”

Amir Tsarfati has pointed out that in the new government in Israel (the world’s only Jewish State) “the only religious party is the Muslim.”

“They collaborated with the left and the Arab Muslims in Israel, and that’s how they got their majority to replace Netanyahu,” Tsarfati explained. “I’m looking at the nation of Israel today. We are more divided than ever, but this ‘government of change’ is bringing a change for the worse.”

“The fabric of the society of Israel that always held strong, conservative, nationalist, people who are people of their flag, of their land, of their nation, of their Jewish roots, the biblical ancestral Homeland, all of that is gone right now,” he lamented. “And when you are no longer that strong from within then the enemy can smell the weakness and then I believe the Ezekiel war is just around the corner.”

“It’s the beginning of the disintegration of Israel morally and spiritually,” he added.