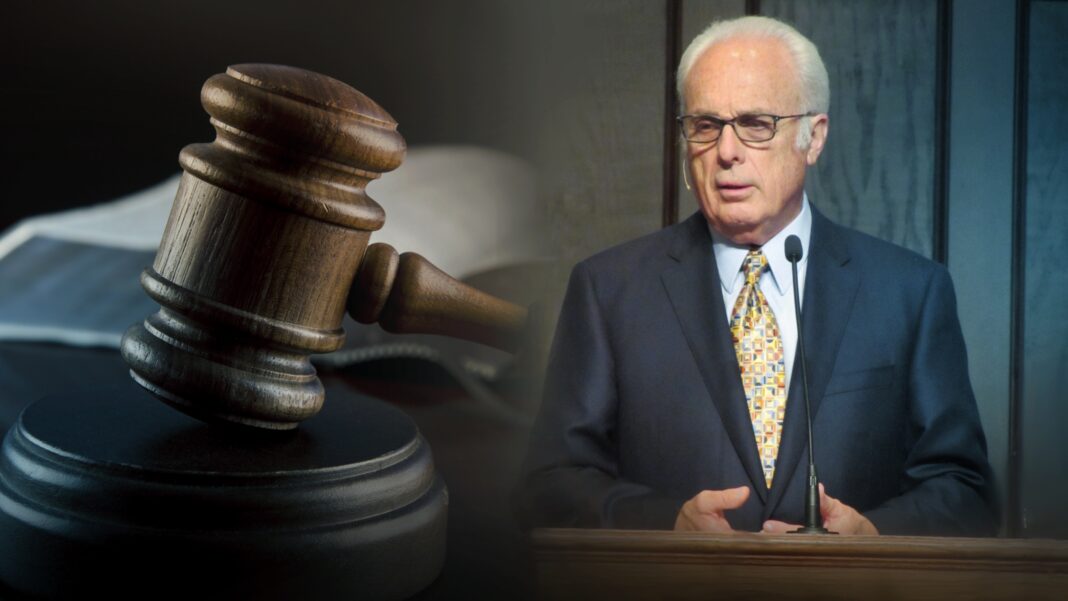 Thomas More Society : Press Release – Attorneys for Pastor John MacArthur and Grace Community Church have announced that the State of California and County of Los Angeles have agreed to pay $800,000 in “prevailing party” attorneys’ fees. This occurred after state and federal courts in California issued permanent injunctions prohibiting the State of California or any of its agencies from ever again imposing discriminatory restrictions on all houses of worship.

Ellis responded to the settlement, stating, “The church is essential. Religious liberty and the Constitution won today against the overbroad, arbitrary, indeterminate, and clearly unconstitutional mandates from Gavin Newsom and Los Angeles County. I am so very proud of Pastor MacArthur’s steadfast leadership and refusal to abdicate headship of Christ’s church to the state. I hope this hard-fought result encourages Californians and all Americans to stand firmly with the protections our Constitution rightly provides, and against tyranny.”

LiMandri added, “This was a very hard-fought case every step of the way. Pastor MacArthur and Grace Community Church refused to bow to government tyranny and they finally obtained the excellent result they deserved. Thanks to their courage and perseverance, justice prevailed and the First Amendment was vindicated. No longer can the County of Los Angeles and the State of California treat people of faith like second class citizens. This result is a victory for all Americans who cherish religious liberty.”

Grace Community Church, its Elder Board, and Pastor MacArthur have been the target of ongoing unconstitutional religious discrimination by the City of Los Angeles and the State of California, amid the state’s orders to cease in-person church assembly during the coronavirus pandemic.

The persecution of Grace Community Church and MacArthur, known worldwide for their ministry and seminary, was surprising to many. The church and its lead pastor have enjoyed an impeccable 65-year history of serving the Los Angeles community in person and having a reputation for good citizenship and deference to legitimate state authority.

However, the State of California, the County of Los Angeles, and the City of Los Angeles unconstitutionally used COVID-19 as a pretext to attempt to force churches to close indefinitely.

In a series of aggressive actions, Grace and MacArthur were abused by the governing authorities. First, the City of Los Angeles, through a cease-and-desist letter, threatened Grace Community Church and Pastor MacArthur specifically with a daily fine of $1000 or arrest, after which Grace filed suit against the state and county.

The County of Los Angeles targeted the church and pastor by requesting they be held in contempt of court. Next, the county attempted to punish Grace and MacArthur by yanking a 45-year-old parking lot lease out from under the church. The cancellation of that lease by the county has since been rescinded as part of the settlement.

A series of victories and setbacks in California Superior Court finally came to an end on August 31, 2021, when the Board of Supervisors of the County of Los Angeles voted to approve the settlement with Grace and MacArthur. Pursuant to that settlement, the county will pay $400,000, along with an additional $400,000 paid by the State of California as compensation for the attorneys’ fees incurred by Grace and MacArthur.

Pastor MacArthur said, “We are very grateful for our Lord’s protection and providence throughout this past year. Our commitment to the Word of God and his church has never wavered. We have simply continued to stand firm, as we always have and always will. We put our trust in the Lord Jesus Christ who is the head of the church.  Over the past year, our congregation has seen his hand of blessing in ways like never before, and the Lord’s promise has been realized: ‘I will build my church and the gates of Hades will not overpower it.’  I am thankful for the advocacy of our attorneys, Jenna Ellis and Charles LiMandri, and this outcome.”

“When I found the information [that the vaccine was developed with aborted fetal cells] I thought the Lord wanted me to show it to my family, to convince them not to get [the shot]"