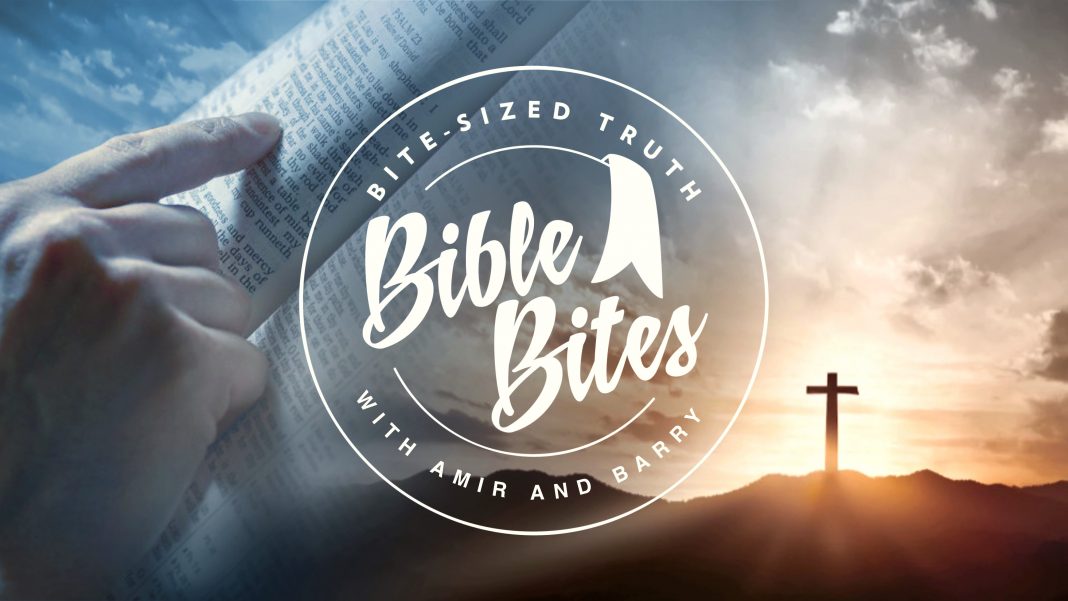 “Jesus said, “When the Helper comes, whom I shall send to you from the Father, the Spirit of truth who proceeds from the Father, He will testify of Me.” (John 15:26) Who will be sent? The Spirit of truth. From Whom does He proceed? The Father. “He will testify of Me.” There is no person on planet earth who has the Holy Spirit and is not testifying of Jesus. If there is no testimony of Christ, there is no Holy Spirit. A rabbi who does not accept Jesus as Savior cannot have the Holy Spirit. It’s really very simple. He can be the chief rabbi. He can be a great scholar. He can be a professor or a doctor. I don’t care who he is. If he cannot testify that Jesus is God in the flesh, the Word that came to earth, the One who became flesh and dwelt among us and died for us, the Holy Spirit is not in him. It’s not enough to say He was a good man. It’s not enough to say He was a good teacher. He wasn’t just a great prophet, as they claim in Islam. No, Jesus is God!”

There are many elements of Scripture that some Christians view differently than others – issues like the timing of the rapture and the centuries old freewill versus predestination debate. However, there is one truth above all others in the Bible as it pertains to saving faith that is non-negotiable and not subject to interpretation and that is the Deity of Jesus Christ.

Isaiah 7:14 KJV – “Therefore the Lord himself shall give you a sign; Behold, a virgin shall conceive, and bear a son, and shall call his name Immanuel.”

The Bible prophesied 700 years beforehand that a Son was going to be born of a virgin, and this baby boy would bear the name Immanuel, which means “God with us”. That pretty much settles the argument as to whether or not a God-man was to be expected and if God could have a Son. This Son of God would therefore share His Father’s attributes and powers.

John the Baptist knew there was a “coming One” and when he inquired through his disciples about Jesus, the answer was not simply a “yes, I am the Coming One”. Jesus responded by doing things that only God can do.

Consider what Jesus said to His disciples on the night He was betrayed:

The Jews that Jesus surrounded Himself with well knew that the title “Father” referred to God. Jesus said to them at the Last Supper, “Believe the same things about Me that you believe about the Father.” Phillip then asked Jesus to reveal the Father to them, and Jesus said to him, “Phillip, after all this time have you still not understood that I am God in human flesh? If you have seen me you have seen the Father, also.”

John 5:18 KJV – “Therefore the Jews sought the more to kill him, because he not only had broken the sabbath, but said also that God was his Father, making himself equal with God.”

Jesus’ claim to be equal with the Father was clearly a declaration that He is God. The scribes and Pharisees knew that, and, thus, they sought to kill Him on the charge of blasphemy. To say Jesus never claimed to be God is a grave error.

Romans 5:6-9 KJV – “For when we were yet without strength, in due time Christ died for the ungodly. For scarcely for a righteous man will one die: yet peradventure for a good man some would even dare to die. But God commendeth his love toward us, in that, while we were yet sinners, Christ died for us. Much more then, being now justified by his blood, we shall be saved from wrath through him.”

If Jesus was just a man – even if he was a good man or a good teacher or a prophet – He couldn’t be anyone’s Savior because He Himself would have needed one. Unless His blood was sinless – and no person’s is (Romans 3:23) – it would not have the saving power required. Jesus had to be the God-man in order to shed blood that was sufficient to cover the sins of the world.

Hebrews 7:26-27 KJV – “For such an high priest became us, who is holy, harmless, undefiled, separate from sinners, and made higher than the heavens; Who needeth not daily, as those high priests, to offer up sacrifice, first for his own sins, and then for the people’s: for this he did once, when he offered up himself.”

There are many interpretations of Scripture that born again, Christ-loving, God-honoring Christians debate about. The Deity of Jesus is not among them. It is His separation from us, though He walked and lived among us, that makes His blood distinct from ours and gives it soul-saving power.

But Jesus is God! He claimed to be God. He proved He is God. He is the Son of God equal to the Father and the Holy Spirit. If you reject that, there is no one and nothing else that you can believe that can save your perishing soul.

Colossians 1:15-18 KJV – “Who is the image of the invisible God, the firstborn of every creature: For by him were all things created, that are in heaven, and that are in earth, visible and invisible, whether they be thrones, or dominions, or principalities, or powers: all things were created by him, and for him: And he is before all things, and by him all things consist. And he is the head of the body, the church: who is the beginning, the firstborn from the dead; that in all things he might have the preeminence.”

The head of the church is Jesus, who created all things. The Bible says in Genesis 1:1, that in the beginning it was God who created the heavens and the earth. Therefore, Jesus must be God.

The Father, Son, and Holy Spirit make up the Triune Godhead. Jesus was not just another man, Jesus is God with us!