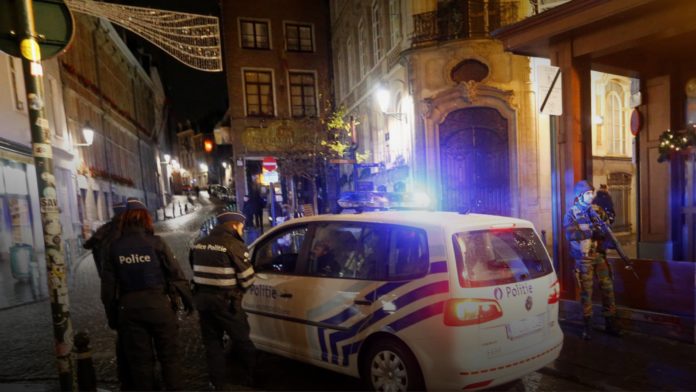 Police in Belgium have shot a man who witnesses said attacked two people with a knife. The suspect was reportedly hit in the hand by officers in Ghent during the incident on Bevrijdingslaan.

Pictures show a man pinned to the ground on the busy road as witnesses watched in horror.

‘The investigation is ongoing, we will comment later,’ public prosecutor said according to HLN.

It comes after armed police shot dead a suspected terrorist – feared to be wearing a suicide vest – after at least two people were stabbed in London. The Metropolitan Police said the London shooting occurred at around 2pm on Streatham High Road on Sunday.

The force believes there are also ‘two injured victims’ from the incident and are awaiting updates on their condition. In an earlier tweet, the Met said: ‘At this stage it is believed a number of people have been stabbed.

‘The circumstances are being assessed; the incident has been declared as terrorist-related.’

A 19-year-old student from Streatham, claimed to have witnessed the shooting on Streatham High Road in front of a Boots store.

He said: ‘I was crossing the road when I saw a man with a machete and silver canisters on his chest being chased by what I assume was an undercover police officer – as they were in civilian clothing… The man was then shot. I think I heard three gun shots but I can’t quite remember… After that I ran into the library to get to safety… From the library I saw a load of ambulances and armed police officers arrive on the scene.’