Bible Bite: When Will Israel End? 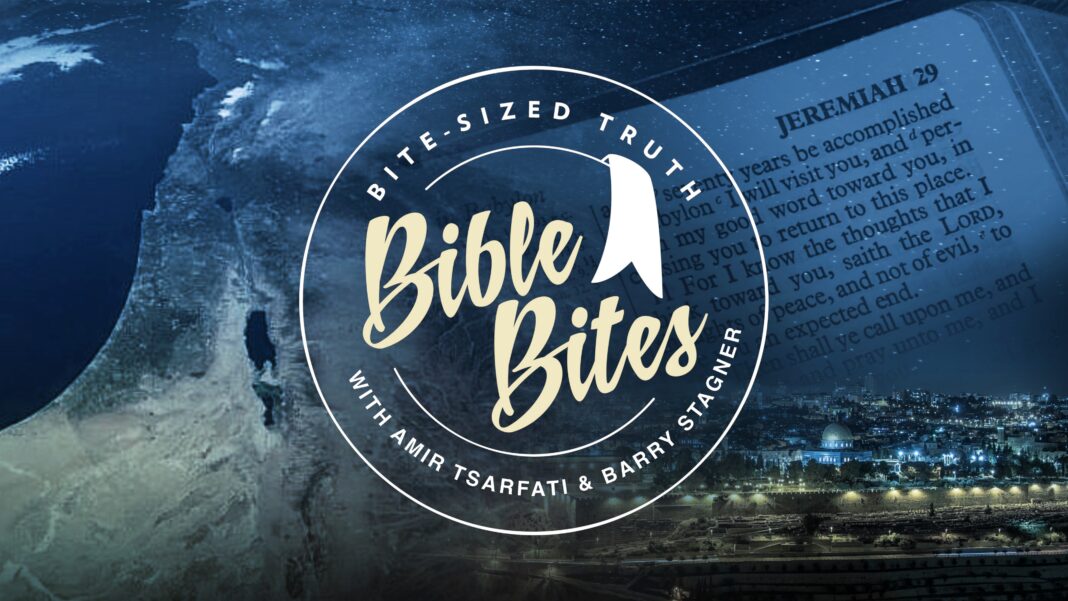 “Thus says the Lord who gives the sun for a light by day, the ordinance of the moon and stars for light by night, who disturbs the sea and its waves roar. The Lord of hosts is his name. “If those ordinances depart from before me,” says the Lord… Say then. Then. No, say it with an attitude of, Then! “Then the seed of Israel shall also cease from being a Nation before me forever.” In other words, when you walk outside and there is no sun, there is no moon, no stars, they’re gone. Then Israel is no longer a Nation before God.

By the way, it’s going to happen. You know when? When the Lord will make new Heavens, a new Earth, a new Jerusalem, there will be no more need for the sun, the moon and the stars, because Jesus will be the menorah that shines the light. There will be no more need for a temple, and Israel is no longer Israel. Anyone who dwells there is the people of God, the children of God, that’s it. No more distinction between Jews. You understand it’s going to happen one day, but until the eternity in the new Heavens and new Earth, and new Jerusalem, Israel is still a nation that stands before God, and no one can destroy them, not even the anti-Christ.”

One of the most critical aspects of studying the Word of God and arriving at the proper interpretation is context. Take for example this wonderful promise to Israel through the prophet Jeremiah:

Jeremiah 31:35-37 KJV – “Thus saith the Lord, which giveth the sun for a light by day, and the ordinances of the moon and of the stars for a light by night, which divideth the sea when the waves thereof roar; The Lord of hosts is his name: If those ordinances depart from before me, saith the Lord, then the seed of Israel also shall cease from being a nation before me for ever. Thus saith the Lord; If heaven above can be measured, and the foundations of the earth searched out beneath, I will also cast off all the seed of Israel for all that they have done, saith the Lord.”

There are clearly eternal and unconditional elements of this great promise that pertain to God’s covenant with His chosen people. In other words, there are no conditions to meet, or expiration date associated with this promise to Israel from the God of creation who chose them. But there is more to be seen “in context” if we back up a few verses.

One more step back and we can glean the whole context and meaning of what is said in Jeremiah 31:

Jeremiah 29:10-13 KJV – “For thus saith the Lord, That after seventy years be accomplished at Babylon I will visit you, and perform my good word toward you, in causing you to return to this place. For I know the thoughts that I think toward you, saith the Lord, thoughts of peace, and not of evil, to give you an expected end. Then shall ye call upon me, and ye shall go and pray unto me, and I will hearken unto you. And ye shall seek me, and find me, when ye shall search for me with all your heart.”

The Lord told Israel and the house of Judah that they were going into captivity for seventy years in Babylon for their disobedience to the Law in regards to the Sabbatical year (Leviticus 25:18-22). While in captivity, the Lord said they needed to remember that His thoughts towards them were of peace and not of evil, to give them a future and a hope. Then (meaning after the captivity) they will call upon the Lord and He will hear them. This tells us there is a chronological sequence to the events Jeremiah wrote about and that these are not just spiritual life lessons.

Then, in chapter 31, the Lord says that the day in which they will call upon Him and He will hear them is a future day identified by a New Covenant, unlike that which He made with their fathers that they broke. This covenant will happen “after those days” (the days of the Old Covenant) when the Lord takes what was once written on stone tablets and writes it on the heart of the Jews. The Lord will be their God and they will be His people.

Then the Spirit inspires Jeremiah to write a word of assurance to Israel and the house of Judah, which is also a word of instruction to future generations of readers. If the sun ceases to shine by day or the moon by night, or if someone can give the measurements of the universe and reveal how the earth hangs on nothing in space, then you will know that He has cast off Israel forever.

That means the context of this great promise is this: God made an everlasting covenant with Israel. And His discipline towards them was severe for their disobedience and idolatry. However, after the Law is fulfilled and a New Covenant is made, God will prove Himself faithful to His promises to Israel and all Israel will be saved.

How do we know that God has a plan for Israel and the Jews today? The sun, the moon, and the ordinances established at creation bear witness that God is faithful to His word. He has not cast of Israel nor has He replaced Israel with the church.

He told Jeremiah to remind Israel that He has good thoughts and future plans for them even though they were in Babylon. And He promises that someday, “I will forgive their iniquity, and their sin I will remember no more.”

This is a reminder that should comfort us knowing that God’s plans and promises do not change when we falter and fail.

How do we know this is true? One word – Israel.