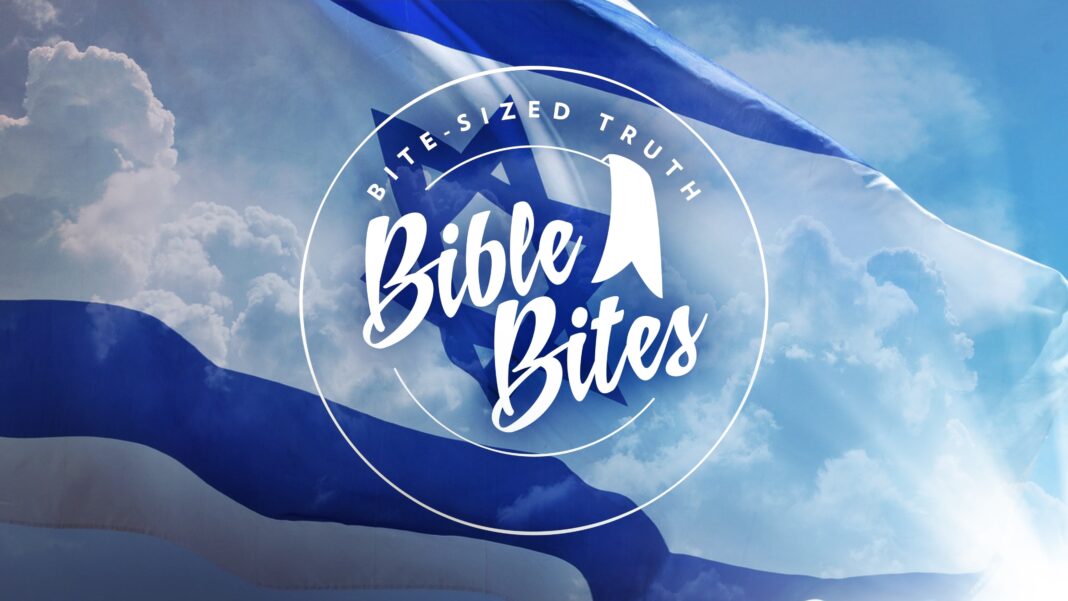 “Some people think that the rebellious behavior of Israel even today has caused God to abandon them forever. But we all remember throughout all the history, from the very beginning, it was made clear in the Bible that Israel is not perfect. In fact, in Ezekiel 36 when the Lord said that e’s going to bring us back, look what He says. “I will take you from among the nations. I will gather you out of all countries and bring you into your own land.” He says, first, I’m going to do the physical restoration. And what is the next word? Then. Can you say the word then, which means after. First comes the physical then comes the spiritual. You don’t expect Israel to believe, not yet. They will believe, you know when? When they look at Him, whom they’ve pierced. When Jesus will return, as we sang, and His feet will stand on Mount of Olives and they see Him and they will mourn and they will cry and they will repent.”

While it is a sad reality that many miss the prophetic significance of the rebirth of the nation of Israel by denying that modern Israel is biblical Israel, it is also a sad truth that the doctrinal significance is lost on many as well.

Deuteronomy 7:6-10 KJV – “For thou art an holy people unto the Lord thy God: the Lord thy God hath chosen thee to be a special people unto himself, above all people that are upon the face of the earth. The Lord did not set his love upon you, nor choose you, because ye were more in number than any people; for ye were the fewest of all people: But because the Lord loved you, and because he would keep the oath which he had sworn unto your fathers, hath the Lord brought you out with a mighty hand, and redeemed you out of the house of bondmen, from the hand of Pharaoh king of Egypt. Know therefore that the Lord thy God, he is God, the faithful God, which keepeth covenant and mercy with them that love him and keep his commandments to a thousand generations; And repayeth them that hate him to their face, to destroy them: he will not be slack to him that hateth him, he will repay him to his face.”

1 Peter 2:9-10 KJV – “But ye are a chosen generation, a royal priesthood, an holy nation, a peculiar people; that ye should shew forth the praises of him who hath called you out of darkness into his marvellous light; Which in time past were not a people, but are now the people of God: which had not obtained mercy, but now have obtained mercy.”

Psalm 94:14 KJV – “For the Lord will not cast off his people, neither will he forsake his inheritance.”

Romans 11:1-6 KJV – “I say then, Hath God cast away his people? God forbid. For I also am an Israelite, of the seed of Abraham, of the tribe of Benjamin. God hath not cast away his people which he foreknew. Wot ye not what the scripture saith of Elias? how he maketh intercession to God against Israel saying, Lord, they have killed thy prophets, and digged down thine altars; and I am left alone, and they seek my life. But what saith the answer of God unto him? I have reserved to myself seven thousand men, who have not bowed the knee to the image of Baal. Even so then at this present time also there is a remnant according to the election of grace. And if by grace, then is it no more of works: otherwise grace is no more grace. But if it be of works, then it is no more grace: otherwise work is no more work.”

How some arrive at the conclusion that the Lord has cast off Israel, His chosen people by birth, but He will not cast off the church, His chosen people by faith, is a bit of a mystery. Not only does it not make sense, it contradicts what Scripture tells us about God’s choosing of both groups as His own special people. If a Christian is going to learn anything from the rebirth of the nation of Israel, outside of prophetic fulfillment, it would be that God is faithful and does not cast off His people even though He, as a loving Father, disciplines those whom He loves.

God setting His love on the Jews is an act of His grace. Israel did not merit His love just as Christians do not. He chose Israel by His grace and He saves “as many as received Him” by His grace (John 1:12).

Some like to argue that God cast off Israel for killing their Messiah, Jesus of Nazareth. Others would argue that it was the Romans who killed Jesus. It is true that the leading Jews arrested, falsely accused, and convicted Jesus. And it is true that Roman soldiers mocked and beat Him and then nailed Him to a cross. But the actual truth is that the one who sent Jesus to the cross was His Father.

John 3:16 KJV – “For God so loved the world, that he gave his only begotten Son, that whosoever believeth in him should not perish, but have everlasting life.”

God gave His only begotten Son to the cross. The Son came in the likeness of sinful flesh willingly, in order to fulfill His Father’s command. If the Father gave His Son and His Son laid down His life willingly, and dying for the sins of the world is why Jesus came in the first place, then doesn’t that mean the whole world was complicit in the need for God to send His Son to die for our sins?

Yes, nationally, Israel rejected their Messiah. Yes, the first Christians were all Jews. Yes, the church today is predominately Gentile. But someday, all Israel will be saved.

The descendants of David are the Jews. The text requires the Jews be in possession of Jerusalem at the time when they “look upon Me whom they pierced.” This can only refer to the second coming when “every eye will see Him,” thus making it an impossibility for modern Israel not to be the Israel of the Bible.

The rebirth of Israel is a prophetic miracle. It is also a doctrinal pinnacle reminding us that when God chooses people, He will never cast them off forever!

Today, a man who popularized a belief that fueled racism resulting in extremely evil fruit is again celebrated. Where is “cancel culture”?
Read more
Berean Review

The Biden administration is promising some quick and radical action as soon as it takes office – leading one political activist to warn America...
Read more