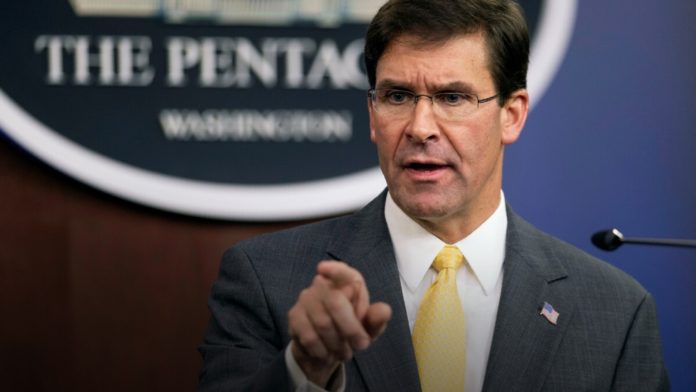 US Secretary of Defense Mark Esper said there were no plans for a US pullout from Iraq, Reuters reported on Monday.

“I don’t know what that letter is… We’re trying to find out where that’s coming from, what that is. But there’s been no decision made to leave Iraq. Period,” Esper was cited as saying after a letter purportedly signed by head of the US military’s Task Force Iraq, Brigadier General William Seely, was seen by the AFP and Reuters.

The letter said troops would “be repositioning forces over the course of the coming days and weeks to prepare for onward movement.”

The document was not a forgery, but a “poorly-worded” draft meant to explain the increased troop movement in Baghdad area that got released by mistake, a top US general was cited as saying.

The Sunday vote in the Iraqi parliament, which was ignored by Sunni and Kurdish lawmakers, resulted in a bill calling for removing foreign troops out of Iraq being approved.

The bill drew ire from President Trump, who threatened to slap sanctions on Iraq and said there will be no pullout until Iraq pays for a costly military base.

On Monday, Iraq’s caretaker Prime Minister Adel Abdul Mahdi reportedly told the US envoy in Baghdad that the two countries should cooperate in implementing the resolution.