Twitter Censors Focus on the Family, Accuses Them of ‘Hateful Conduct’ 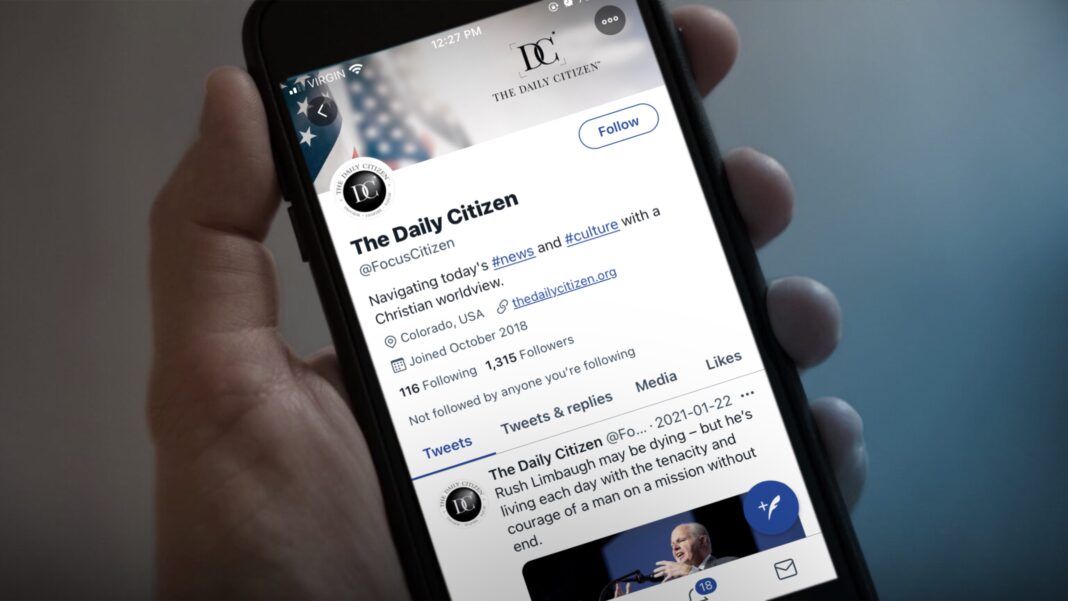 Attacks against free speech by big tech companies have quickly escalated into a full-blown censorship campaign as social media giants are now regularly targeting and silencing Christians and conservatives. Their latest target? Focus on the Family.

The Christian organization has just been censored by Twitter. The platform locked the global ministry’s “Daily Citizen” publication for allegedly violating their rules against posting “hateful” content.

Focus on the Family CEO Jim Daly said this accusation is absolutely untrue.

The Daily Citizen tweeted a quote on Jan. 19 from one of its articles acknowledging that the Biden administration appointed a transgender woman to serve as Assistant Secretary for Health at the Department of HHS.

The tweet read: “Dr. Levine is a transgender woman, that is, a man who believes he is a woman.”

Daly argued that the comment was simply defining what a transgender woman is and had nothing to do with Levine’s “trans” identification.

Twitter wrote in an email, “Hi The Daily Citizen, your account, @FocusCitizen has been locked for violating the Twitter Rules. Specifically for: Violating our rules against hateful conduct. You may not promote violence against, threaten, or harass other people on the basis of race, ethnicity, national origin, sexual orientation, gender, gender identity, religious affiliation, age, disability, or serious disease.”

Twitter urged the ministry to remove the tweet or appeal the decision. They challenged the move and sent a letter to the platform requesting an explanation for their action, Premier Christian News reports.

“Numerous outlets reported on Levine’ appointment – including President Biden’s White House – noting Dr. Levin’s transgender identification,” the letter reads. “Many of the articles and tweets explained that Dr. Levin was born male, believed he is really a woman, had surgery and opposite-sex hormones, and now identifies as a woman.”

“Our tweet does not promote violence against, threaten, or harass Dr. Levine,” it continued. “Yet, we are deeply puzzled about how it was misconstrued. We simply explained to our readers the appointment and defined what transgender women are – those born male who believe they are a woman, regardless of whether they have had opposite-sex hormones or surgeries.”

“We believe Twitter’s blocking of this tweet and lockdown of our account discriminates against Focus on the Family’s The Daily Citizen on the basis of our religious affiliation. The Daily Citizen contests Twitter’s characterization of our message and appeals this decision.”

Twitter maintained that their support team deemed the tweet a violation and would not reverse their decision.

Facebook claimed Gagnon’s criticism of the government-imposed ideology violated the platform’s “Community Standards on violence and incitement,” according to pjmedia.com.

However, Twitter refused to remove pornographic images and videos of a teenage sex trafficking victim, citing that an investigation into the material “didn’t find a violation” of the company’s “policies.”

A federal lawsuit was filed last month by the victim and his mother claiming Twitter gained a profit from the abusive content.