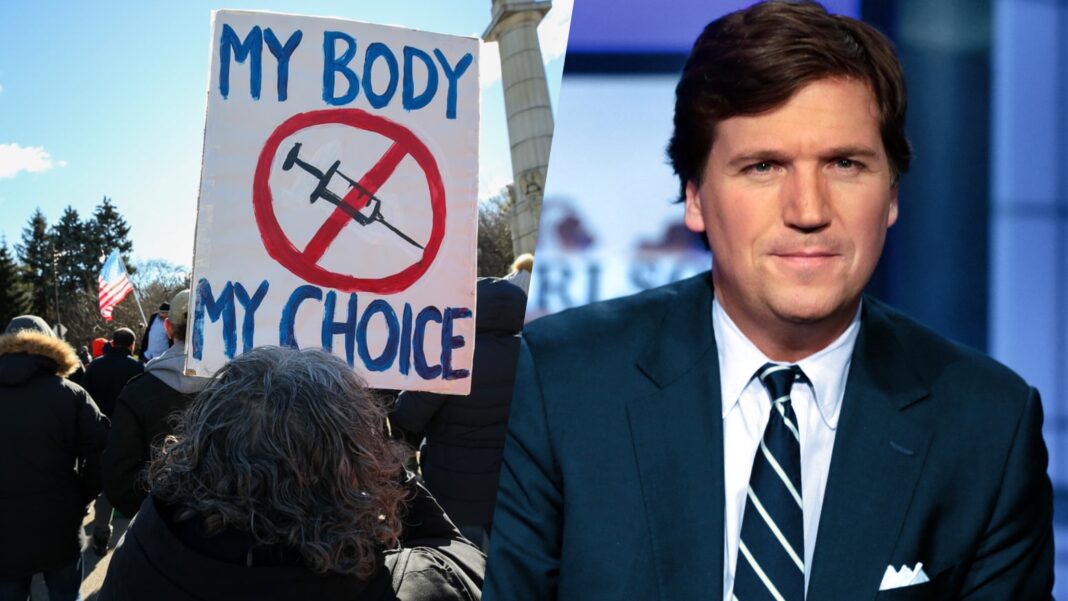 Despite the Centers for Disease Control and Prevention (CDC) confirming possible “dangerous side effects” the COVID-19 vaccine has on young people, colleges across the country are requiring students to be vaccinated before returning to school, providing little to no exemptions, Fox News host Tucker Carlson said Thursday.

Recent reports from Israel that have been confirmed by the CDC show a correlation between a heart inflammation called myocarditis and vaccinated young people.

“Given these numbers, it is possible that healthy young people in this country will be much more likely to be harmed by the vaccine than by COVID itself,” Tucker said. “That would be a disaster. In fact, it’d be the definition of a preventable disaster.”

However, Tucker said institutions are responding to these statistics “mostly by ignoring them completely.”

Below is a transcript from this segment of “Tucker Carlson Tonight”:

Tucker Carlson: In January, Israel became one of the first countries in the world to give the new coronavirus vaccine to young people. At the time, Israel’s education ministry said the vaccine was necessary so that students could sit for in-person exams, so schools mandated the shot; kids got it. What happened next? This week, we found out.

Israeli health officials released a report showing that vaccinated young people, particularly young men, were developing a potentially fatal complication, a heart inflammation called myocarditis, and they were developing it at extremely high rates. Researchers determined that the incidence of myocarditis in vaccinated young men was fully 25 times the usual rate. Some of them died. In Canada, at least one public health official observed the same thing. Dr. Peter Liu is the chief scientific officer at the University of Ottawa Heart Institute. He’s an expert in myocarditis. Liu began to notice heart inflammation in patients who received the vaccine.

“It is more than coincidental,” he said. In Germany, authorities concluded the same thing. The German government just announced that healthy young people should avoid the vaccine. It’s too dangerous. This is a serious development for us in the United States. If statistical trends observed in Israel hold here, as many as 150,000 young Americans will develop a potentially fatal heart disorder because of the COVID vaccines. That’s not alarmism; it’s not some kind of anti-vaxxer conspiracy theory. It’s real. Just this afternoon, the CDC confirmed what appear to be dangerous side effects. The country’s two biggest vaccine monitoring systems, the Biden administration’s Vaccine Adverse Reporting System, known as VAERS, and the CDC’s Vaccine Safety Datalink both show strikingly high rates of myocarditis in young people who have been vaccinated.

“We clearly have an imbalance there,” a CDC official announced today. “Imbalance” is one way to put it. “Potential emergency” is another way. Given these numbers, it is possible that healthy young people in this country will be much more likely to be harmed by the vaccine than by COVID itself. That would be a disaster. In fact, it would be the definition of a preventable disaster.

How are institutions responding to these new numbers? Well, mostly by ignoring them completely. In fact, in just the last week, many American colleges and universities have announced they will require proof of vaccination or an official vaccination card before they allow students to return to campus. At some schools, the mandate applies only to students. For reasons no one has explained or could possibly defend, it does not apply to faculty and staff. They are not required to be vaccinated. As for the huge number of young people who have already recovered from COVID and therefore likely have robust immunity, at least as robust as they could get from any vaccine, they will be required to get the shot too.

These are big numbers. There are close to 20 million college students in this country. And in the end, most will have no choice but to take a drug that other governments have concluded is dangerous for them to take. Yesterday, Virginia’s state university system announced that vaccine exemptions will be nearly impossible for students to get.

An exemption “will not be granted on a philosophical, moral, or conscientious objection.” In other words, your conscience is irrelevant. Personal autonomy means nothing. It is no longer your body, it is no longer your choice. When it comes to this vaccine, there is no escape.