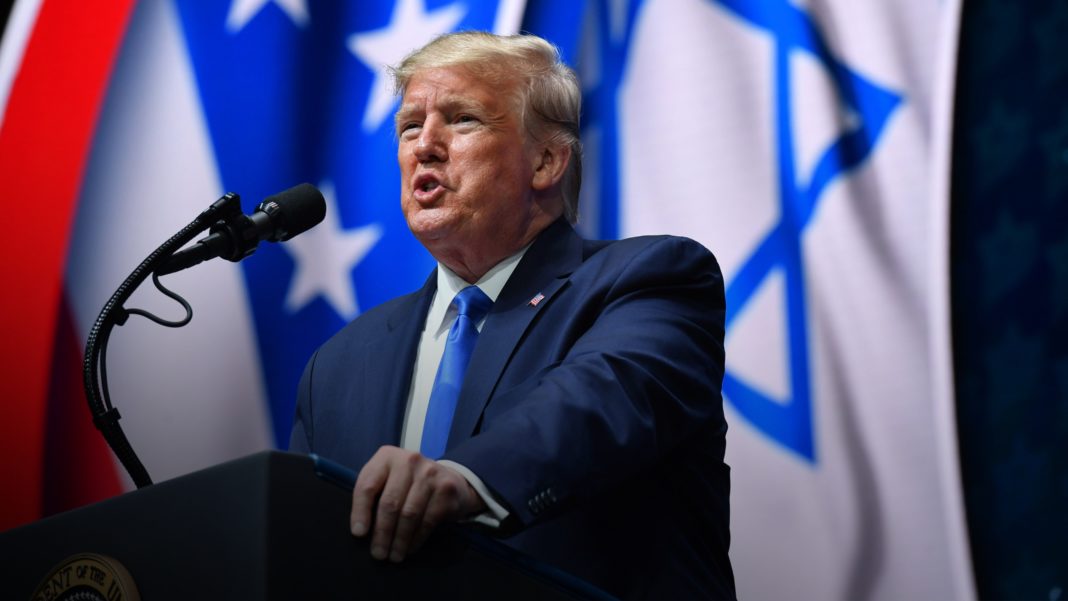 US President Donald Trump plans to present a map of Israel’s new borders under his peace plan, a source involved in drafting the plan told The Jerusalem Post on Monday.

Trump is set to unveil the long-delayed plan to Prime Minister Benjamin Netanyahu and Blue and White leader Benny Gantz in separate meetings at the White House on Monday, and ask them to take immediate action on implementing it. The president hopes that having support from both of the leading candidates in the March 2 election will provide momentum for what he has called “the “Deal of the Century.”

The US president’s message to Netanyahu and Gantz is that, “you have six weeks to get this going – if you want it,” a US official told Reuters.

It is still uncertain whether Trump will show the map in his joint remarks about the plan with Netanyahu on Monday or at a later time.

The plan is expected to include the annexation of all Israeli settlements to Israel, along with most of the Jordan Valley, in a way that would allow for maximum territory with minimum non-Israel residents, such that the Palestinians would live in their own, demilitarized state.

The “near zero” amount of Palestinians that would be on the annexed land, a source close to Netanyahu said, would be “treated in accordance with the law.”

This likely means that they would be permanent residents, with an optional pathway to citizenship, like residents of east Jerusalem.

The source close to Netanyahu speculated that Israel could apply sovereignty over the Ma’aleh Adumim settlement and its surrounding areas first, rather than the Jordan Valley, which has been the object of attention and political wrangling in recent weeks.

Annexing the Jordan Valley could be more complicated because it may threaten stability in Jordan and its peace treaty with Israel. In addition, some 75,000 Palestinians live in the valley.

It had long been presumed that Ma’aleh Adumim, the third largest settlement and home to over 38,000 people, would be the first West Bank settlement to be annexed by Israel. It is five kilometers from Jerusalem in the direction of the Jordan Valley, such that it could be a step towards its future annexation.

Annexation of Ma’aleh Adumim, the source said, would include the unbuilt E1 section of the city. Construction in E1 has been frozen for 26 years due to US pressure, because Palestinians hold that Israeli building in E1 would make it impossible for them to have a contiguous state. However, Israel holds that E1 and Ma’aleh Adumim must be part of its final borders to ensure its own territorial contiguity and a united Jerusalem.

Evangelical Christian leader Dr. Mike Evans, one of Trump’s faith advisors and founder of the Friends of Zion Museum, said that in addition to the widely-reported detail that under the US plan a Palestinian state would have to be demilitarized, it also “does not give the Palestinians any air space [or] the ability to establish treaties.”

Evans, who said he was in close touch with the president and his peace team, also said that, “the plan does not take away the major Biblical sites” from Israel, a likely reference to allowing Israeli access to the Tomb of the Patriarchs in Hebron and Rachel’s Tomb in Bethlehem, among others.

For evangelical Christians, the plan “is everything we were hoping for – everything,” Evans said.

Trump and Netanyahu’s Monday bilateral meeting is expected to be lengthy and address other matters such as Iran and Syria, in addition to the peace plan, and will be followed by a shorter meeting between Trump and Gantz, focused on the plan.