Starting where Nazis Burned Books, 10,000 March in Berlin Against Anti-Semitism 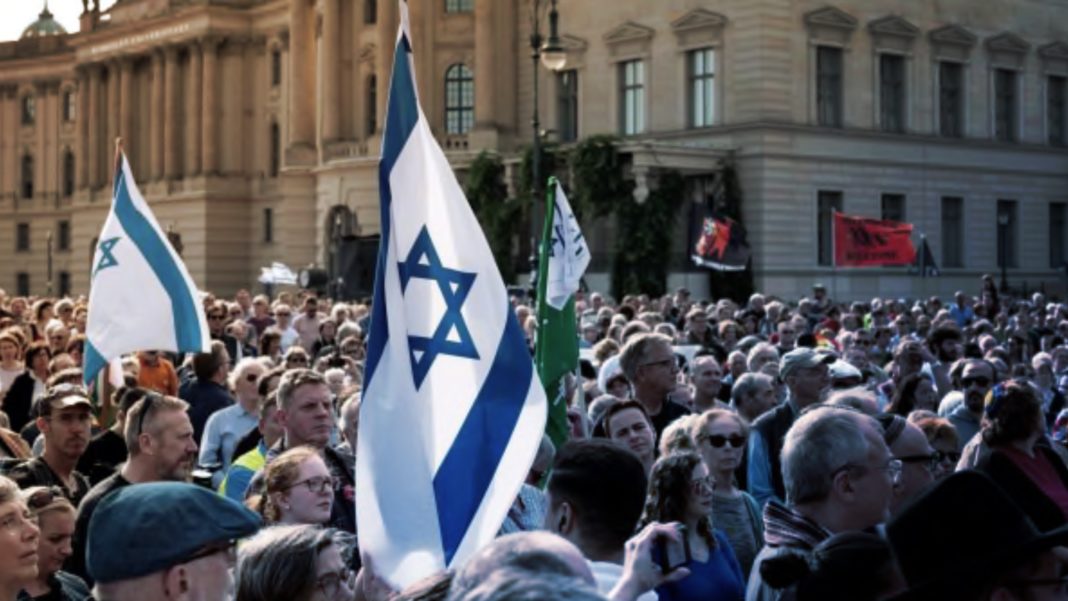 Thousands of people in Berlin protested against anti-Semitism on Sunday, four days after a German neo-Nazi attacked a synagogue in the eastern German city of Halle.

About 10,000 people participated in the march through the German capital. Several thousand others protested Saturday in other cities, including Hamburg and Marburg.

Many Germans are in shock over Wednesday’s attack in which two people were killed outside the synagogue and in a kebab shop.

The attack has renewed concerns about rising far-right extremism and questions about the slow police response.

Stephan Balliet, the 27-year-old, heavily armed man who has confessed to the attack, tried but failed to enter the synagogue on Yom Kippur, Judaism’s holiest day. Balliet, who livestreamed his attack online, has been charged with two counts of murder and nine of attempted murder.

On Sunday, people started their march at a symbolic landmark, Berlin’s Bebelplatz square, where the Nazis burnt thousands of books by Jews, Communist and other opponents, weeks after Adolf Hitler took power in 1933.

The marchers carried Israeli flags and banners with slogans like “No Nazis.”

The rally was organized by the civil rights group Unteilbar, or “Indivisible,” under the slogan “We stand united” and ended at the city’s New Synagogue with its famous golden dome topped by a Star of David.

Friedhelm Schmitt, a 52-year-old neurologist, said he’d joined the protest “because I had to. It’s my democratic duty. It’s like going to vote.”

German prosecutors have said the suspect sought to carry out a “massacre” in the synagogue and had about four kilograms (nearly nine pounds) of explosives in his car.

He unsuccessfully tried for several minutes to enter the house of worship, where dozens of people were attending a prayer service, but the door withstood his shots. He then killed two people and severely injured a couple before he was arrested.

Police have been criticized because they arrived at the synagogue seven minutes after they were alerted to the shooting.

On Friday night in Halle, thousands of people gathered at the synagogue in a demonstration of solidarity with the small Jewish community, whose members returned to the synagogue for Shabbat eve prayers. Some held candles; others placed flowers at a makeshift memorial.

“We’re standing between two flames,” said the synagogue’s gabbai (warden), 59-year-old Josef Levin, who came to Germany from Ukraine in 2004.

“On the one side we have the neo-fascists, and on the other, we have immigrants coming from Syria and other places in the Middle East, who hate us just as much. And we’re stuck in the middle, burning,” Levin told The Times of Israel on Friday night.