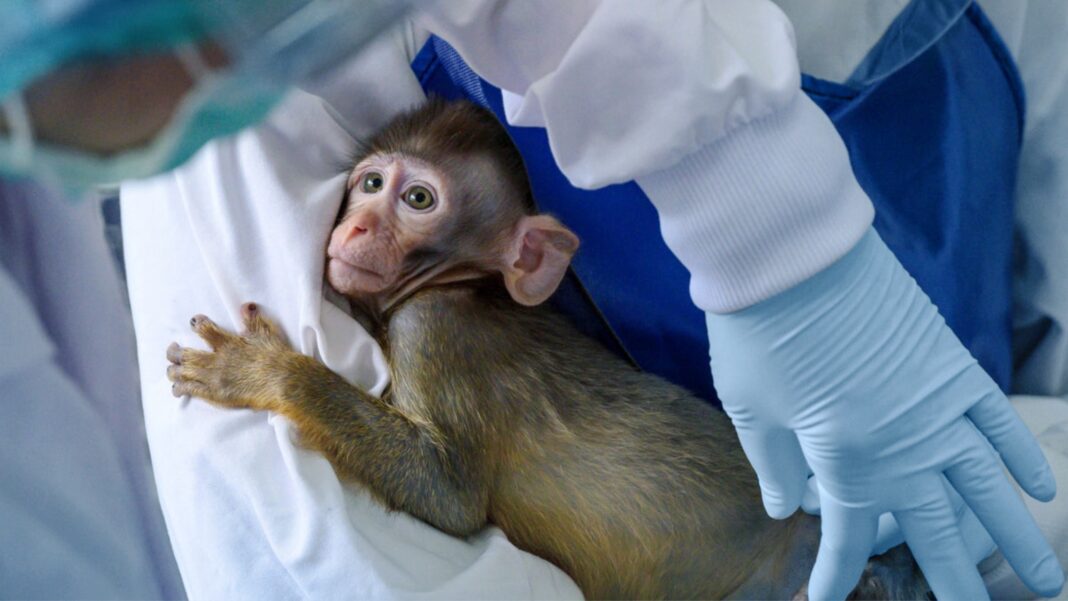 “In December 2019, White Coat Waste Project (WCW) sued the National Institutes of Health (NIH) after it refused to release videos and other materials related to wasteful and bizarre psychological experiments on primates that have cost taxpayers nearly $100 million just since 2007,” the video’s chyron reads, adding that some of the experiments have been “continuously funded for over 40 years.”

As the watchdog detailed in February 2020:

Never-before-seen videos released to WCW depict distraught monkeys chained by the neck in tiny cages being tormented with rubber spiders and mechanical snakes, objects the primates instinctively fear, just to observe their reactions. NIH “white coats” sucked out parts of these monkeys’ brains or destroyed them with toxic acid to intentionally worsen the primates’ fear. In the video, a callous NIH “white coat” can be heard joking, “Where the hell is the dancing monkey?,” after one of the tests on the terrified monkeys ends.

According to the group, such experiments, which took place at the National Institutes of Mental Health (NIMH) in Bethesda, Maryland, “have cost taxpayers over $16 million since 2007, and $1.7 million in 2019 alone.”

The cruel experiments are resurfacing after the White Coat Waste Project drew attention to Fauci’s NIH division partially funding an experiment which involved locking beagles’ heads in cages while allowing sandflies to eat them alive. The beagle puppies used in the experiment also had their vocal cords removed to prevent barking:

According to the Hill, the beagles were infected with “disease-causing parasites to test an experimental drug on them.” The experiment transpired in a Tunisia, North Africa laboratory where as many as 44 beagle puppies endured what Rep. Nancy Mace (R-S.C.) referred to as a “cruel” and “reprehensible misuse of taxpayer funds.”

Fauci’s NIH division reportedly sent part of a $375,800 grant to a lab in Tunisia to conduct this experiment.

People for the Ethical Treatment of Animals (PETA) is now calling on Francis Collins, director of the National Institutes of Health, to be fired.

“The deadly experiments on dogs are proof that Fauci’s boss is stuck in the failed science of yesteryear,” Kathy Guillermo, PETA senior vice president, said:

He is spending billions of dollars on studies that include infecting and cutting up dogs, frightening monkeys, and addicting mice to cocaine that don’t lead to cures or vaccines while humans die from Alzheimer’s, HIV, cancer, multiple sclerosis, ALS, and other deadly ailments

In Proverbs 12:10 we read something very interesting regarding the treatment of animals. The verse states that the “righteous” have “regard for the life” of animals under their care. This is an act of mercy, to treat God’s creation with kindness knowing that we, by God, were given “dominion” over them (Genesis 1:26). The verse in Proverbs goes on to contrast that “the tender mercies of the wicked are cruel.”

Many may be surprised to learn that the Bible says a great deal about the treatment of animals. Jesus even uses the example of His care for animals, to teach man about God’s personal loving-kindness and provision towards us, who He made in His image (Matthew 6:26-32).

It is worth clarifying that there is an important distinction between showing kindness towards God’s creatures, as the Bible calls us to do, versus the worshiping of creation (Romans 1:25) and elevating the status of animals by claiming they and humans are the same, as espoused by evolutionist (Genesis 1:26), both of which run contradictory to Biblical truth.

In the time prior to Jesus return, we are told in 2 Timothy 3:3 that one of the characteristics of mankind will be a “loss of natural affection,” this is also reiterated in Matthew 24:12 which states that because of the increased sinfulness of society “the love of many” in that time “shall wax cold.”

This same chapter states that the “last days” will be as it was in the days of Noah. In Noah’s time, “violence” and “corruption” were rampant (Genesis 6:11). God stated that He saw “the wickedness of man was great in the earth, and that every intention of the thoughts of his heart was only evil continually” (Genesis 6:5).